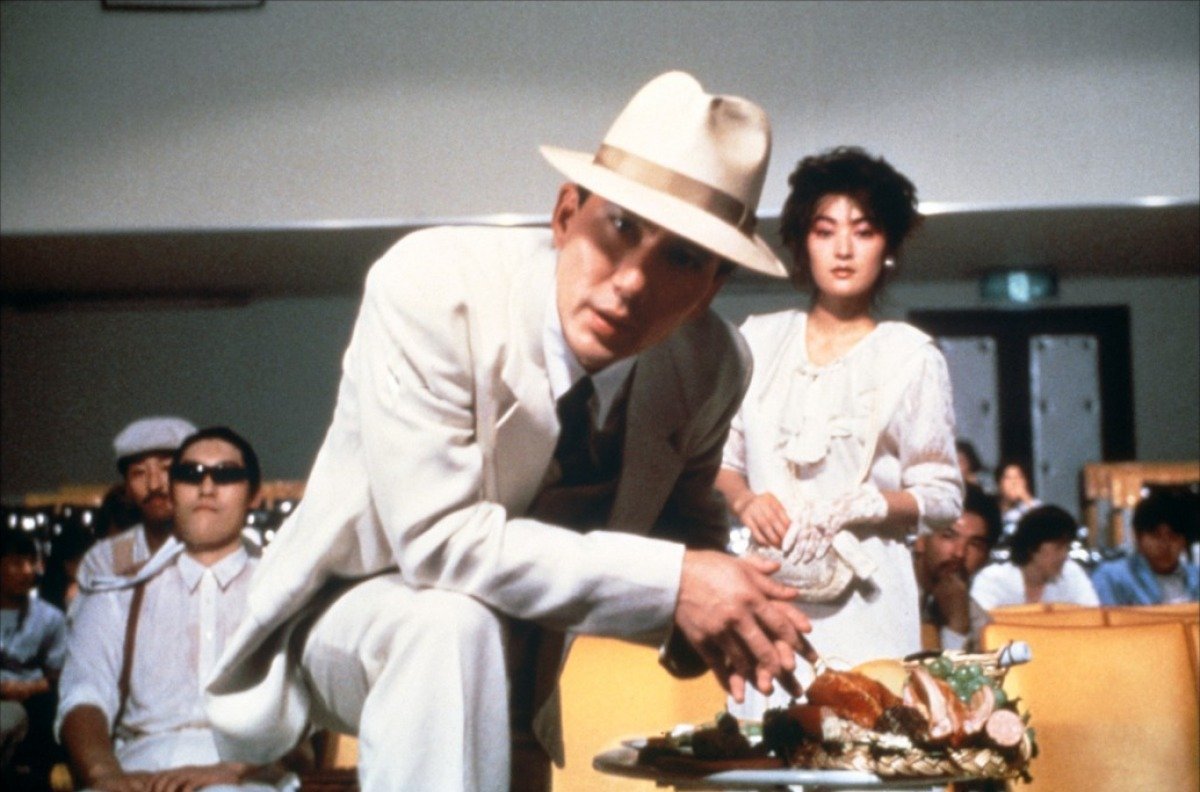 This happens regularly to me. I’m 6’4” and rarely exercise; I don’t have much else to do these days. Today I visited the DMV and as ID I used my passport that I’ve had since high school. It lists my weight at around 210 lbs. The woman helping me said that couldn’t be right still. I responded, “Yeah, I’m more around 220 now”. She responded incredulously. Bless her heart. The day my metabolism gives out, I’m never stepping foot in another DMV.

But my late night hunger has a unique cause this late night. I’ve just finished re-watching Jûzô Itami’s 1985 film Tampopo, a cinematic ode to food in the style of a classic Hollywood western. And DAMN does it make you hungry. Chronicling the quest of one struggling chef/single mother Tampopo and her struggle to become a Great Ramen Cook, Tampopo borrows its structure from films like The Magnificent Seven (ironically NOT Seven Samurai) and… Okay, Westerns aren’t really my genre. Shane? Sure.

Tampopo is a movie best watched at least twice. Prone to flights of fancy and lengthy tangents, it is a discombobulating first viewing. Entertaining (what was the last ramen-centric Western YOU watched, huh?) but scattered. Or so it would seem. Watching it tonight, though, I discovered that I unabashedly, unequivocally, passionately adore this movie. Strange, heinous, hysterical, uplifting, and wholly appetizing.

The narrative of Tampopo is one that’s frequently interrupted. Not by a lull in the drama or lack of direction, simply writer/director Itami wants to explore a different facet of Japanese culture’s relation to food. He does so with little vignettes, isolated in their premises but united in their purpose; Tampopo is a conclusive thesis on Food. The obsession, importance, minuteness, fetishism, fascination, craftsmanship, and desire mankind brings to it. And never does it spell it out, never does it lecture. It just explores it. This can take the form of a gangster and his girlfriend fulfilling their mutual kink with crayfish and egg yolks, a husband demanding his dying wife make her family dinner in a desperate attempt to keep her alive, or an etiquette teacher trying to teach her students how to politely eat spaghetti as an American loudly slurps it across the restaurant. These are just some of the sensual, tragic, and madcap diatribes the film casually weaves in and out of. To pull that off you have to have a lot of heart and Tampopo has it in spades.

Led by the absolutely delightful performances of Nobuko Miyamoto (as the titular Tampopo who was, kind of fun fact, the wife of the late Itami) and Tsutomu Yamazaki (as the Gary Cooper-esque Gorô), the cast brings a contagious, vivacious spirit to the proceedings. They are wholly game for the lunacy of the screenplay, grounding it with humanity. It makes the comedy funnier and the truly unique drama sympathetic.

Writing this, I’m finding that Tampopo‘s a kind of overwhelming movie to talk about. Early on it subtly annihilates the fourth wall as partners in trucking Gorô and Gun (a baby faced Ken Watanabe!) are driving in torrential rain. Gun voice’s his impatience and hunger while Gorô comforts that they only have about two hours to go; the film’s run time being just short of two hours. A little later on, Gorô tells Gun to take the truck on as their clients are waiting, essentially dismissing an audience wanting a conventional story. At several points, it overtly alludes to the protagonists quest to cook satisfying ramen as a parallel for the filmmaking process. How do you talk about that?

This is a film that’s every sequence is a galaxy of fine detail. From the dignified disgust and alarm of the aforementioned etiquette teacher’s facial expressions to the sound design of slurping the perfect noodle to the imaginative ways the lustful gangster incorporates his room service into his lovemaking, it adds up to a universe of stunning craftsmanship.

Filmmaker Ana Lily Amirpour once described Tampopo: “(It) unapologetically just wants to have fun with the things it likes.” I think that sums it up quite well.