What Cinema Can Be: Part II | Streaming Risks

In the previous article, we took a look at what cinema could offer in terms of untraditional presentation. In that instance, it was galleries. But most of how we watch media now, especially cinema, consumes us right inside our home.

TV presented us with a different way of looking at narrative that was previously reserved for radio or seeing a movie in the theater. But, over the years, it was easier to go see a movie than it was to wait for a film you wanted to watch on TV. Although people would say the same thing they do now, “I’ll wait till it comes out on… ,” renting was only ever a temporary form of distribution, not production, so, nothing really took us away from the cinema completely until streaming services started producing their own content. Now, fully-fledged productions by independent and large studio directors premiere in the comfort of our living room. And we’re able to access these productions at any time of the day. But besides traditional filmmaking, are the dominant streaming companies taking on any controversial or unconventional projects? Swaying away from the traditional TV series or film content?

No stranger to risk and controversy, PBS, in 1985, took a chance on its home viewer audience with Alive from Off Center, an arts anthology television series. Some might say PBS was the ideal station to pull this off because of its underrated nature as a public broadcasting company, but it actually had more to risk than any other station. PBS had the least funding of any household name channel. People’s disinterest could not only cost them ratings but their actual studio. They decided to trust artist integrity and the general audience. This might have been a good business decision for them as well. Although they didn’t have the funds that other mainstream stations had, they instead let artists have free creative reign, which for any artist is the ultimate enticement. For 10 years it became a haven for producing unconventional filmmaking. Some by up-and-coming artists like Marlon Riggs and Spalding Gray. Some by already established veterans like Jonathan Demme and the Brothers Quay. RuPaul premiered his first televised lip-sync. The most talked-about film was Laurie Anderson’s What You Mean We?. She then hosted the show for a year, presenting a short skit every week before the full program. This series is even talked about now in academic settings for its historic significance.

During the end years of this PBS series, BBC premiered its own lesser-known take called, Sound on Film, from 1994 to 1996. Short-lived but successful, this series produced collaborations between filmmakers and composers. One of the most notable (and my personal favorite) was Blight, directed by John Smith, the filmmaker behind the infamous avant-garde film The Girl Chewing Gum. The film was accompanied by genius composer and Stanley Kubrick’s eventual musical collaborator for Eyes Wide Shut, Jocelyn Pook. Blight is an emotional documentation of English residents and their fight and eventual failure to protect their homes from government demolition. The edited interviews take on their own libretti, intertwined with Pook’s beautiful synth and string composition, which juxtaposes the mundane destruction. And with a little Chicago history thrown in, this film would go on to win the Gold Plaque for Best Experimental Film at the Chicago International Film Festival in 1997.

These kinds of series faded, and I haven’t seen something of this caliber of experimentation and risk in TV until more recently.

Mainstream TV is becoming indistinguishable from streaming as both Hulu and Amazon have deals with HBO, Showtime, and other TV partners to stream their content. They are constantly morphing into a single entity.

Steven Soderbergh famously collaborated with HBO on the risqué Behind The Candelabra, a production that was turned away from larger studios because of its “special” (as Soderbergh would say) content, until it was greenlit by HBO and went on to receive high critical acclaim. When Soderbergh’s interactive HBO series Mosaic was announced in 2017, there was intense curiosity.

Mosaic is the only streaming production I know HBO has performed. The story is a murder mystery, but instead of a traditional “Choose Your Own Adventure” type narrative (one we saw not too long ago for Black Mirrors: Bandersnatch) it’s more of a “Decide What You Want To See” story. It’s about your character-driven interests and less of tension based on “WHAT SHOULD I DO; I’M GOING TO DIE” choices. But your choices do not affect the actual outcome of the story or shift the universe. The interface is a branching map, which includes unlocking certain stories. You decide how much you want to watch. You could go back and look around. You could follow the character you like most until the end of their narrative. The producers likened it to that of a fantasy novel map. The app also gave you the ability to hear messages and recordings, look at images of letters, art, and other paraphernalia. Besides the unconventional narrative presentation, one of the most notable things was it was free, but only available for handheld device platforms, and has sadly ended. Soderbergh would end up editing it for a watchable series directly for HBO. There’s a lot of ways this kind of platform could be improved on, evolve, extend and branch out, but, sadly, there’s been no talk about more of this narrative road. Despite its seeming end, this feels like the start of mainstream platform risks. 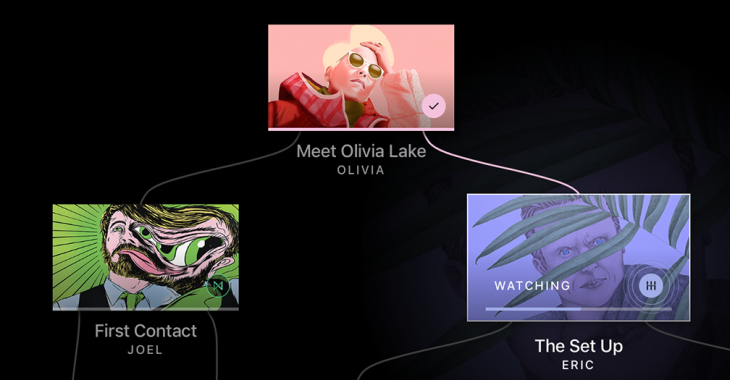 Although not streaming, but still a mainstream TV production, some would consider David Lynch’s Twin Peaks: The Return (a 2017 continuation of his original 90s series) to be a groundbreaking exercise in experimental television. Halfway into preproduction, Lynch almost dropped the project due to his qualms about pay. Maybe Showtime was nervous about the unconventional content and lowered the pay because they didn’t want to risk such experimentation. Posting his qualms publicly to twitter was a perfect stunt as there was an outcry from the public and Lynch received the pay he wanted. While understanding its importance for experimental mainstream television, and even loving a few moments, I ultimately couldn’t cope with the whimsical beating of women and out of touch themes. Who knows if the return will return once again.

Netflix also recently took a turn down the Lynchian highway for What Did Jack Do? It’s a short film about Lynch, who plays a detective interrogating a monkey about fraternizing with a chicken and who else the fuck knows. If you’ve ever seen the extended sequences of the other-dimensional table-talk from Twin Peaks: Fire Walk With Me, that’s what it’s like. I’d be interested in having my parents watch it and see what they think…

For as much flak as Netflix gets, they’ve done their fair share of producing content with independent and big named directors. They most recently co-produced the short music film Anima. Half music video, half musical short film directed by P.T. Anderson, with music written by and starring Thom Yorke. Anderson is no stranger to experimentalism as we saw with his Jeremy Blake collaboration Blossoms & Blood, an experimental short taken from Punch-Drunk Love footage. Also, no stranger to music videos, beginning with videos of Fiona Apple in the late 90s, to Joanna Newsom, and now to every HAIM music video ever. As music videos are highly consumer friendly, this was a perfect experiment for a Netflix collaboration. It was released in select theaters for one night only and then premiered on Netflix the next day. I thought it was one of the unseen highlights of 2019. 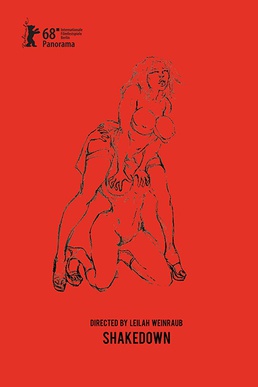 There are plenty of more alternative streaming platforms specialized for producing and streaming unconventional and independent content: Vimeo, self-uploader experimental channels on YouTube, The Criterion Channel, Shudder, Mubi, Fandor, Kanopy (free with a library card!) etc.. One of my favorites is a free streaming platform of restored rarities commissioned by Nicolas Winding Refn.

But these platforms cater specifically to artists and cinephiles, people who are already actively looking for this kind of content. I think through history we’ve found audiences respond well to meaningful works. Trusting your audience and their integrity just as much as you would a director or artist is important. I hear people—who have multiple streaming platforms­—complain all the time that there’s nothing to watch. There’s plenty to watch, it just feels like nothing because a lot of what’s available has no content. Leilah Weinraub would say, “It’s important to respect an audience, and to remember audiences are willing to engage and learn something new.” I hope streaming services can be a new arena for greater experimentation and I think that we’re slowly starting to see that take place.

If you guys have any examples of mainstream streaming platforms or networks taking risks with more unconventional film content, please comment below!

One thought on “What Cinema Can Be: Part II | Streaming Risks”