What Cinema Can Be: Part I | The Superhero Conundrum

With everything that’s going on about the convoluted, contradictory, and controversial statements regarding superhero movies and what cinema is or isn’t, let us instead focus on what cinema can be.

US filmmakers and audiences alike forget film is a fine art. John Carpenter, maybe inadvertently, stated it best, “In England, I’m a horror movie director. In Germany, I’m a filmmaker. In the US, I’m a bum (Muir 52).” Filmmakers, wrapped up in the pursuit of the big budget world (and even independent world for that matter) seem to overlook untraditional cinema that doesn’t show in theaters.

There are plenty of older examples of experimentation but when we think of current untraditional narrative cinema, let’s say, in the past decade, we might think: Holy Motors, Under The Skin, Tree of Life, Samsara, Leviathan (2012), Post Tenebras Lux, Harmony Korine, etc, etc, etc. But let’s go deeper.

With my art school background, I’ll be the first to admit a gallery can be a cold, boring and uninspiring place. But this is also true for film festivals and mainstream films. Mediocrity is not bias towards any industry. There’s no mistaking a gallery can be a place for great risk taking, experimentation, and beauty. This is not to say experimental film festivals do not exist, but there are films that beg for different presentation. Here are some of my favorites: 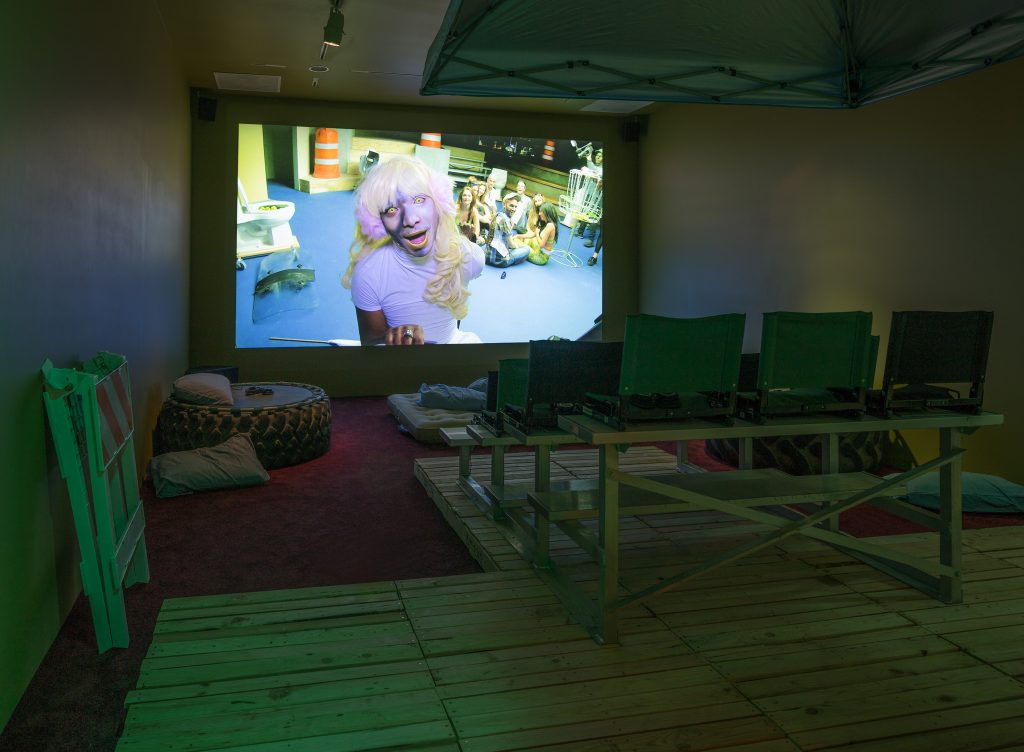 Evolving reality TV to its ultimate form, Trecartin rips through our senses with bouncing images of demonic makeup, saturated coloring, eclectic costume, hyper speed editing, crippling sound design, pounding music, incoherent dialogue, and multi-camera TV techniques. It’s a mesmerizing experience of satirical critique. One that you either need to leave immediately, or will entrance you completely. Trecartin’s gallery set up at the MCA had a makeshift home theater. A mix between bleachers, film stage and a seemingly banal adult play room that reflects the film sets within the films. You also might catch performances from actors like Aubrey Plaza, if you can even recognize her.

You can view Trecartin’s work through vimeo – 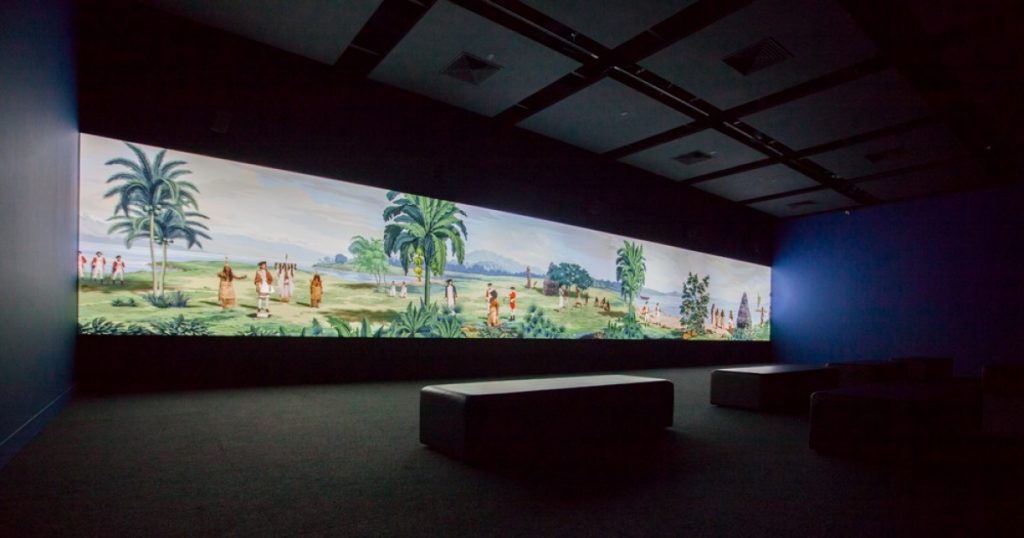 A re-interpretation of the French scenic wallpaper Les Sauvages de la Mer Pacificique, Reihana stretches this wallpaper into a moving screen filled with representations of the Moira peoples interacting for the first time with French colonists, slamming the romantic, utopian ideals of traditional depictions of native meetings. The screen stretches an entire wall and slowly moves like a rotation of the earth. Animated matte background with live action people overlaid, it creates a truly surreal and emotional untraditional narrative.

A clip from the film –

I Will Greet the Sun Again exhibition, Shirin Neshat – The Broad (2019) 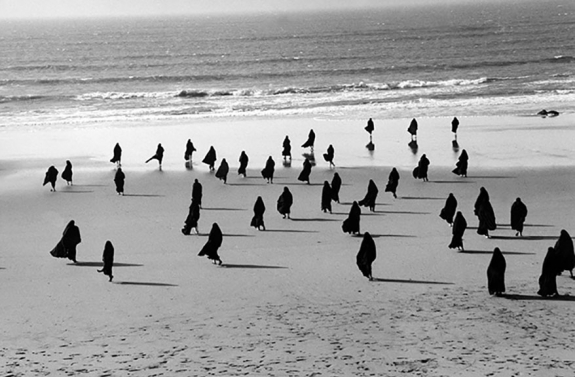 While visiting Los Angeles, I saw Shirin Neshat’s largest ever exhibition. I sat through almost every one of her films, chronologically, from start to finish. Although Neshat has delved into the traditional theater setting with her work, Women Without Men, Shirin is a reminder that cinema does not have to be confined to a theater. Some of her works have two screens on either side of the room, facing each other. As we look to each of them, sometimes the characters look across the room to each other. With performances from Anhoni to Natalie Portman, its truly stunning work that takes on the many social issues of Iranian culture. 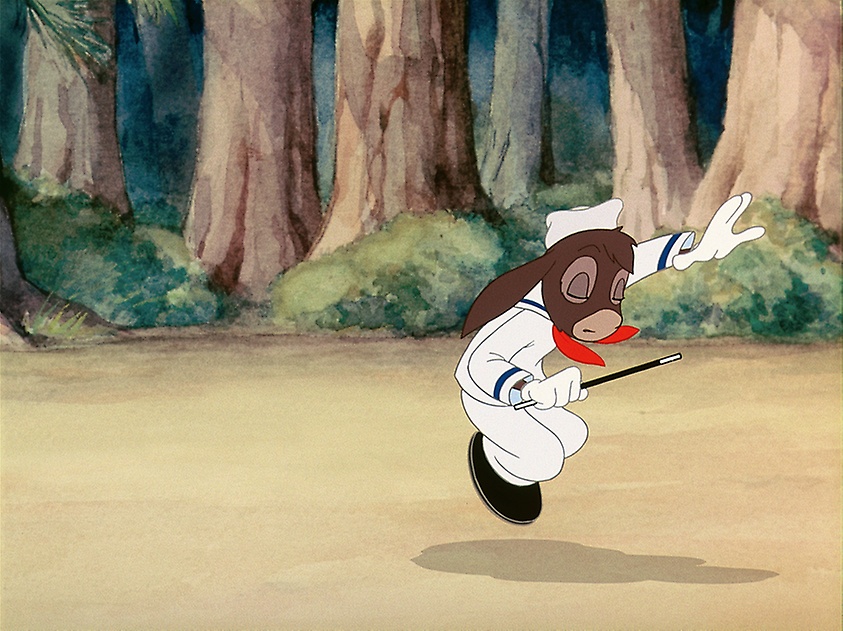 Questioning the very essence of Disney’s historical hold on traditional character design, Imitation of Life uses actual Disney animators to create a musical, filled with familiar surroundings, animals, and characters we think we’ve seen before, once upon a dream. We realize, we’ve been unknowingly taught to think of traditional animation through the eyes of Disney. The unnamed character dances through the film, singing to the birds like Sleeping Beauty, and taunting us to figure out what significance this world holds and the words he sings. The song feeling just as familiar as the animation. What could possibly be the story and origin of this little donkey sailor.

A clip can be seen here –

There are plenty of other examples. Please comment below if you have some.

Don’t get me wrong, I love my local independent theaters: The Music Box, Logan, Facets and Gene Siskel. But remember to look in the nooks and crannies. Go out to the Nightingale Cinema, or, Conversations at the Edge. Remember to visit The MCA (which also has a theater) and AIC, especially on their free days. If you’re new to galleries you can start there then venture further into more DIY spaces. Schedule a visit to the Video Data Bank at SAIC and get inspired from rare films you can’t see anywhere else.

This is not a fight against the idea of cinema as entertainment, but an opening into an underrepresented world of the art form itself. Get inspired, not just by the things you think are the peak of cinema, and start looking for types of cinema you might have never known. Realize what cinema can be, instead of what you think it has to be.

And past the galleries and theaters, for better or worse come the ever pervasive streaming services, which will be Part II of this conversation.

Thanks, and keep searching,

The Films of John Carpenter, by John Kenneth Muir: Page 52