Nicholas Cage. The very mention of the man will cause very different reactions. He is inherently interesting. If you were to decide whether to watch a movie and the only thing you knew about it was that it starred Nicholas Cage, you would probably have one thought: “This is either going to be really good or really bad.” It’s a 50/50 coin flip. Let’s see where you land. I’d like to think I have my ear to the ground as to what’s coming out in theaters or VOD. Yet, going down Cage’s IMDB, I was bewildered. There are movies from his resume that I have never even heard of. And this is true from the beginning of his career to where we are now. The man has had steady employment filled with flops and hits for around forty years now. Recently he’s taken chances and starred in some totally gonzo genre films. There’s his performance in Color Out of Space where you’re not sure at times if he’s acting or just doing a parody of himself. But man, if you want to talk about badass Nicholas Cage films, I have one name for you: Mandy. Nicholas Cage can do a steady stream of crap films for the next five years if he wants. It won’t matter because he will always be able to say, “I was the star of Mandy.”

Willy’s Wonderland is his latest bizarre genre feature. Here he stars as The Janitor. While The Janitor is out driving his car on a desolate road in a desolate town, his tires become spiked. He doesn’t have the cash to fix his car so the locals offer him a choice: spend the night cleaning up Willy’s Wonderland and they’ll have his car fixed by morning. What is Willy’s Wonderland you ask? You ever been to Chuck E. Cheese? Well then you’ve been to Willy’s Wonderland. So, spend the night in the Wonderland and get a free tune-up? That sounds good…that sounds a little too good. And it is! Willy’s is populated by several animatronics who seem to operate on their own. And, wouldn’t you know it, they have a taste for blood. The Janitor seems to be in trouble, right? Well you haven’t met The Janitor, have you? These animatronics are in for a rude awakening. 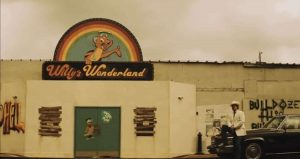 With certain films, you never know which Cage you’re going to get. For Willy’s Wonderland, we get silent tough guy Cage. How silent? The Janitor doesn’t say one word in the entire film. He also has a timer on his watch for whenever he needs to drink his prized soda, Punch. You will not interrupt him while he drinks his Punch. And, after each new attack from Willy and the gang, he just simply puts on a new shirt and continues cleaning. The Janitor answers to no one. Also in the story is Emily Tosta and her group of friends. These are teenagers who know how evil Willy’s is and have a plan to burn it down. First though, Liv decides to help The Janitor escape (even if that’s not on his mind.)

The first bit of good news is that the movie knows what it is. It does not take itself seriously and, frankly, how could it have? It’s Nicholas Cage playing Five Nights at Freddy’s. This ain’t Shakespeare (it’s also thankfully not as boring or annoying as Five Nights at Freddy’s.) However, this is not just “Cage vs evil machines for 88 minutes.” There actually is a plot. First, the machines have a backstory and, for such a ridiculous movie, it’s surprisingly disturbing. Second, the production design and the way the machines look all work well. I don’t know how much was costume work or special effects but the production team pulled it off.  This could’ve been unintentionally hilarious. But, while they’re not all that scary, the machines still feel intimidating. 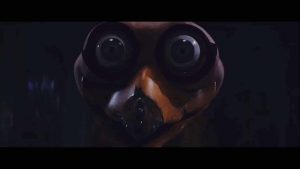 Willy’s Wonderland may be a horror movie but, whenever Cage is onscreen, it’s a comedy. I don’t mean that in an ironic, making-fun-of-it sense. I mean it’s so outlandish it made me laugh with enjoyment. I totally loved Cage in this film. The teenagers I could take or leave. It’s not that I didn’t like these characters but I would have been fine without them. It feels like they’re just here to drop exposition and up the body count. These characters don’t bring anything to the movie except sex appeal and bad decisions. Though who knows? Maybe that’s an intentional tribute to slasher movie past. Furthermore, I think I’d feel more positive if the kills were more creative. Really only one death near the end got a big reaction from me. But credit where credit is due: The Janitor can sure stick it to those machines. Because of that, the non-human kills are pretty enjoyable.

Willy’s Wonderland doesn’t reach the lunacy of the Cage films I mentioned at the beginning but it is still a good deal insane. I’m torn on what to think. I did mostly enjoy this movie but it left me with a question: would the film have worked even better if it was just Cage? It probably wouldn’t be that long of a movie. Plus, it may have gotten old and repetitive if we didn’t cut to different characters. Yet my favorite parts of this movie all involved Cage. With every kill and T-shirt change, I was chuckling at the film’s sheer absurdity. The Janitor even finds a dusty old pinball machine that he continuously plays during his pop breaks. During a big pinball sequence, Cage brings his usual strange charisma. Plus, this sequence even has it’s own 80’s-sounding rock theme. There are few tropes I love more in film than the lone bad-ass character. It’s typically someone older who just wants to be left alone. Sadly (for the bad guys), this person gets pulled into the plot and shows everybody why they shouldn’t have messed with them. Great examples of this trope are action movies like John Wick (2014) and The Equalizer (2014). The Janitor is that mythical of a character and I loved that. As for the movie as a whole, I walked away mostly happy. I don’t usually do ratings but, if I did, I’d probably give this a strong 6/10. Nothing you have to rush out and see but still enjoyable. 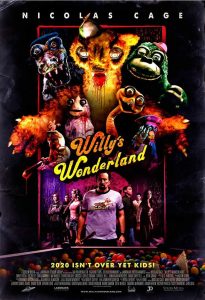