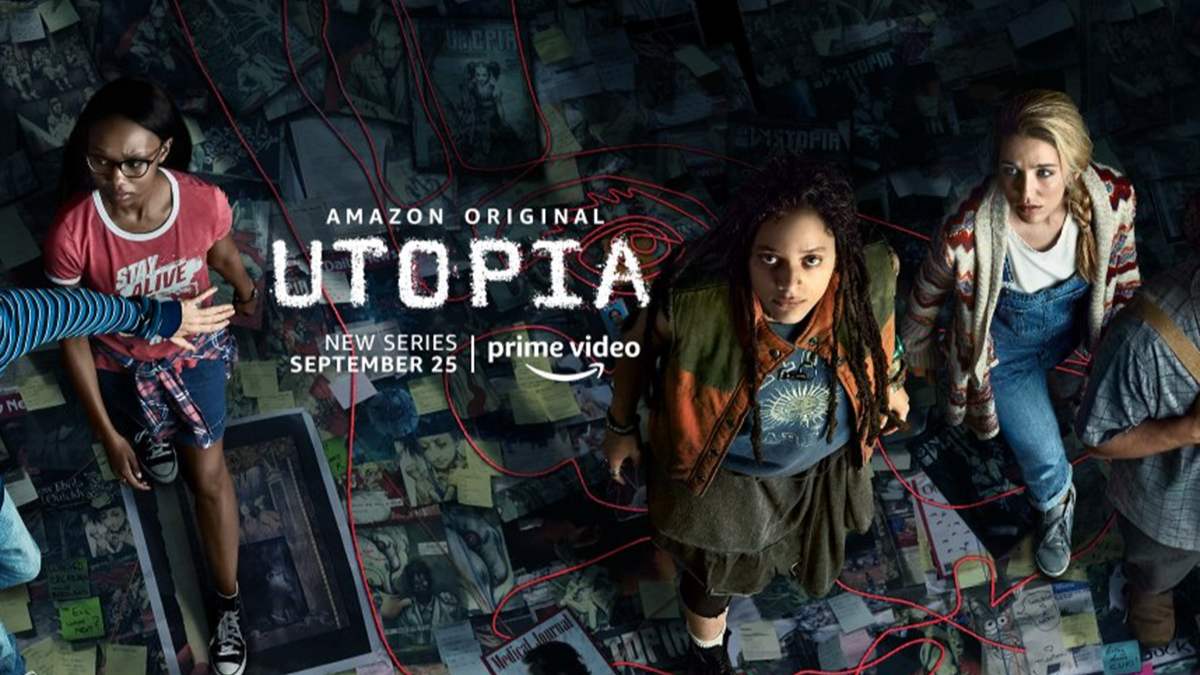 So the other day – aka 9/25/20 is you’re reading this much later – the long-awaited American reboot of Utopia (UK) premiered on Amazon Prime. The original 2 season show, which aired from 2013-2014 on the British network Channel 4, received critical acclaim and has since maintained a dedicated cult following. As such, interest around the American remake – it was first greenlit at HBO in 2014 with David Fincher attached – has always been at the very least simmering in the background. Safe to say, this remake has some big shoes to fill. Not only does it have to stand up on its own, but it has to prove itself as a worthy remake of a beloved original that ended on a cliffhanger.

As a long-time fan of the original – I first watched it shortly after season 2 ended in 2014 – I decided early on I’d like to review the remake when it came out.

Like the original, the story centers around the discovery of a manuscript of an unpublished graphic novel called Utopia, a novel which some believe has predicted every major pandemic of the last decade. Hearing it’s for sale, a group of dedicated fans – Ian, Becky, Wilson Wilson, Sam, and Grant – decide to finally meet and get together at a Chicago comic-con to try and get the manuscript for themselves. What they quickly come to realize is that not only is everything in the comic real but that there’s a very dangerous organization with world-changing ambitions who’ll stop at nothing to get the manuscript. These virtual nobodies are thus thrust into a world of a dangerous conspiracy, forced to work with a person they thought was fictional days ago to try and stop the conspiracy from reshaping the world.

So, after two days and eight episodes, I finally experienced the remake for itself. Now the question is, does Utopia (US) stand up? Honestly, not really. To put it succinctly, I felt that Utopia (US) is a watered-down version of the original.

On a character level, while I never objected to much of the acting performances, I wasn’t crazy about many of the character choices Gillian Flynn – the showrunner and credited screenwriter on all 8 episodes – made. On the one hand, she fixed some complaints I had about the original, in particular about Grant, Alice, and Milner. On the other hand, I thought she made much of the cast blander, taking away much of what made the original cast interesting while making the new cast more generic in the process.

On the protagonist side, the feelings of moral ambiguity and sheer desperation from being out of their depth was missing. The prime example of this to me is Dr. Michael Stearns, the virologist played by Rainn Wilson. In the original, he is forced into the conspiracy through marriage ruining blackmail involving an affair and pregnancy with a prostitute. Everything he does after that is out of sheer self-preservation and desperation. In the remake, outside of feeling marginalized, Michael isn’t forcefully thrust into the deeper conspiracy until later on. Instead, he is more typically heroic, if a bit naive. While that’s not strictly bad, he becomes blander, losing some of his edge in translation.

On the villainous side, I never felt like Harvest and Home were never as threatening as the Network, even with the extra development they received. Sure, the agents of Harvest wracked up quite the on-screen body count, but they never felt like the same implacable balls-to-the-wall threat the Network was. Sure they’d easily kill you, but the way the Harvest would ruin the lives of those in their way – framing people for heinous crimes like child pornography, rape, and mass shootings just to name a few – was at best toned down compared to the Network. For a specific example of this, I thought the hitman Arby (played by Christopher Denham) was not nearly as threatening and unsettling as Neil Maskell’s turn as the character.

As for the story, I didn’t have as many complaints. Mostly this was because Flynn, while deviating a fair amount, sticks to the main plot points of Utopia (UK) S1. That, and she did add in new concepts, characters, and ideas – mostly in regards to Home and the St. Louis hot zone – which is what any good remake should do. This means that at the very least, Utopia (US) is a conspiracy thriller that can keep our attention. That said I still have qualms about the story.

While Flynn did add new stuff and examined unexplored concepts compared to the original, they didn’t strike me as all that interesting. Everything in St. Louis after the hot zone could be reduced to at most a single episode and I wouldn’t mind. Same with the comic convention in the first episode. Conversely, the new stuff I did like was generally tossed to the side, which I found disappointing. That, and I gotta mention that there was a fair amount of story from the original that was cut outright or overly condensed. Story that helped expand the world of Utopia (UK) and add dimension to the characters involved. This, on top of an overall slower pace than the original mixed with the rushing of important developments, creates the odd impression that the story is simultaneously overstuffed yet stripped-down, meandering yet too fast. It’s an odd feeling.

Lastly on the writing side of things, I can’t not mention the fact this was released during the ongoing COVID-19 pandemic. While I can’t blame Amazon for this, watching the St. Louis plot-line, in particular, rings false to me. After seeing how people react to an ongoing flu-like pandemic and the reticence about potential vaccines in the real world, it’s hard to buy the narrative in the show about people demanding an untested vaccine for a disease that hasn’t even spread too far amongst the general population. Again, it’s poor luck for Utopia (US), but it’s a world based pall cast upon this expanded storyline.

With Utopia (US), we don’t get that. Flashes of it sure, but not much. That’s not to say it isn’t a good looking and good-sounding show. The cinematography was good (especially around the Chicago area), the score and the soundtrack were fine, everything was fine. It just didn’t have that style, the soul of the original.

So, on the whole, while Utopia (US)isn’t itself bad – it’s a competently made show that provides enough twists and thrills to keep you interested – it doesn’t justify its existence compared to Utopia (UK). Which is disappointing. I mean, I really wanted to like this. Not only is it more Utopia, but it’s a Chicago production. Hell people in CFS worked on this. In the end though, what I wanted doesn’t change what I think about it. If you’re unable (or unwilling) to seek out the original, Utopia (US) isn’t a bad substitute, but otherwise, I’d stick to Utopia (UK).

If you’re interested in reading more about Utopia (UK), feel free to check out the reviews here on the website.