Yakov Ronen is a man trying to live a new life. He is a former member of the Orthodox Jewish community. He lives in New York City and goes to a group with similar ex-members. One night, a member of his former community asks a last minute favor: someone has died and they need a shomer. This is someone who watches over a dead body during the night to protect it from evil spirits. Yakov declines at first but, as it’s last minute and he needs some cash, he reluctantly agrees. It’s not until he spends time in the house of the deceased that he begins seeing things that aren’t there. Soon it becomes clear: maybe this dead body already has something evil surrounding it.

The Vigil is a horror movie I felt viscerally. The film is scary as hell but also really rather magnificent. Here is a horror that works as a drama as well as a suspense yarn. Yakov is out here by himself. The only semblance of friends he has are his group members and his doctor. He’s a man learning to try and simply exist. That he has one traumatic memory that keeps popping up is just the cherry on top. The spirit, called a Mazzik, knows this and takes advantage of it. Just when you think Yakov has a handle on the situation, the Mazzik is right there. It brings about some pretty effective scares.

There’s something about Yakov’s character that I really felt empathy for. He takes this job out of good faith and a need for money. You can easily picture yourself in his shoes. Nothing he did warranted a malicious haunting. And yet he’s just come across the wrong place at the wrong time. Dave Davis plays Yakov and it’s a breakout performance. Hopefully more work comes his way because, as the heart and soul of this film, he is up to the challenge. Let’s also not forget that this is writer/director Keith Thomas’ feature directorial debut. Here he sets a good spooky mood. This is a film that has real scares. There isn’t a “it was just a cat” moment. There’s no loud noises to simply (and cheaply) startle you. I hate those moments honestly. When I watch a horror movie, I want the scares to matter. I don’t want a fake-out. I want to get my money’s worth. I want something to frighten me. The Vigil does just that.

I can think of at least four specific scares that really worked for me. One involves a TV screen and a secret message. Another involves the classic dilemma of the haunted house genre: Why don’t they just leave? Well they’ve come up with a pretty terrifying reason not to. I’d like to point out Davis’ acting again in this scene because he really made that look painful. The Mazzik itself is supremely creepy. Like all good horror stories, you don’t get to see a lot of it at first. But this is one horror film where, when you do see the monster, its scares still hold up. It’s a spirit that lives to torment you. It’ll make you see visions. It’ll distort your reality. It may never leave you. In terms of dramatic conflict , it really does beg the question, “How is Yakov going to get out of this?”

I should also mention that this is one of the last films of actress Lynn Cohen. She plays Mrs. Litvak, the widow of the deceased. I don’t know if she was ever able to see the finished film since she died a little over a year ago. I hope she would’ve liked the film because I certainly did. I’m impressed that director Thomas was able to slowly ramp up the tension and keep it tight throughout the film. At first it starts with mysterious noises upstairs and lights flickering. Slowly you get unnerving visions and shadows.  It’s in that second act that the Mazzik is fully trying to scare Yakov and the audience. However, it’s in the third act that the film reaches beyond just trying to scare you. Like I said earlier, it’s dramatic elements leave just as big of a mark as it’s horror elements. Without getting into spoilers, the message here is to make you think about your own past.Thomas and Davis succeeded in that aspect. It’s a horror film with a melancholy heart.

I’ve always wondered what acting in a horror movie is like. How does one stay in a frightened headspace? How do you get yourself to that place? Well Dave Davis got there. He not only plays the scared bits convincingly but, when we find out about Yakov’s past, he makes your heart ache. It’s a powerful performance. This film is quite original. Maybe I haven’t been looking but I haven’t seen a lot of horror movies set in this community before. As someone largely unfamiliar with it, it’s what cinema can do best: a look at a world that you know nothing about. If Thomas decides to stay in the horror genre, I’m definitely interested. If he decides to venture outside of it, I’m still interested. This is a strong debut. It is a fine film down to the very last shot. What everyone finds scary is completely subjective. I’ll just say that The Virgil scared me good. 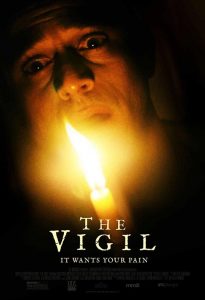