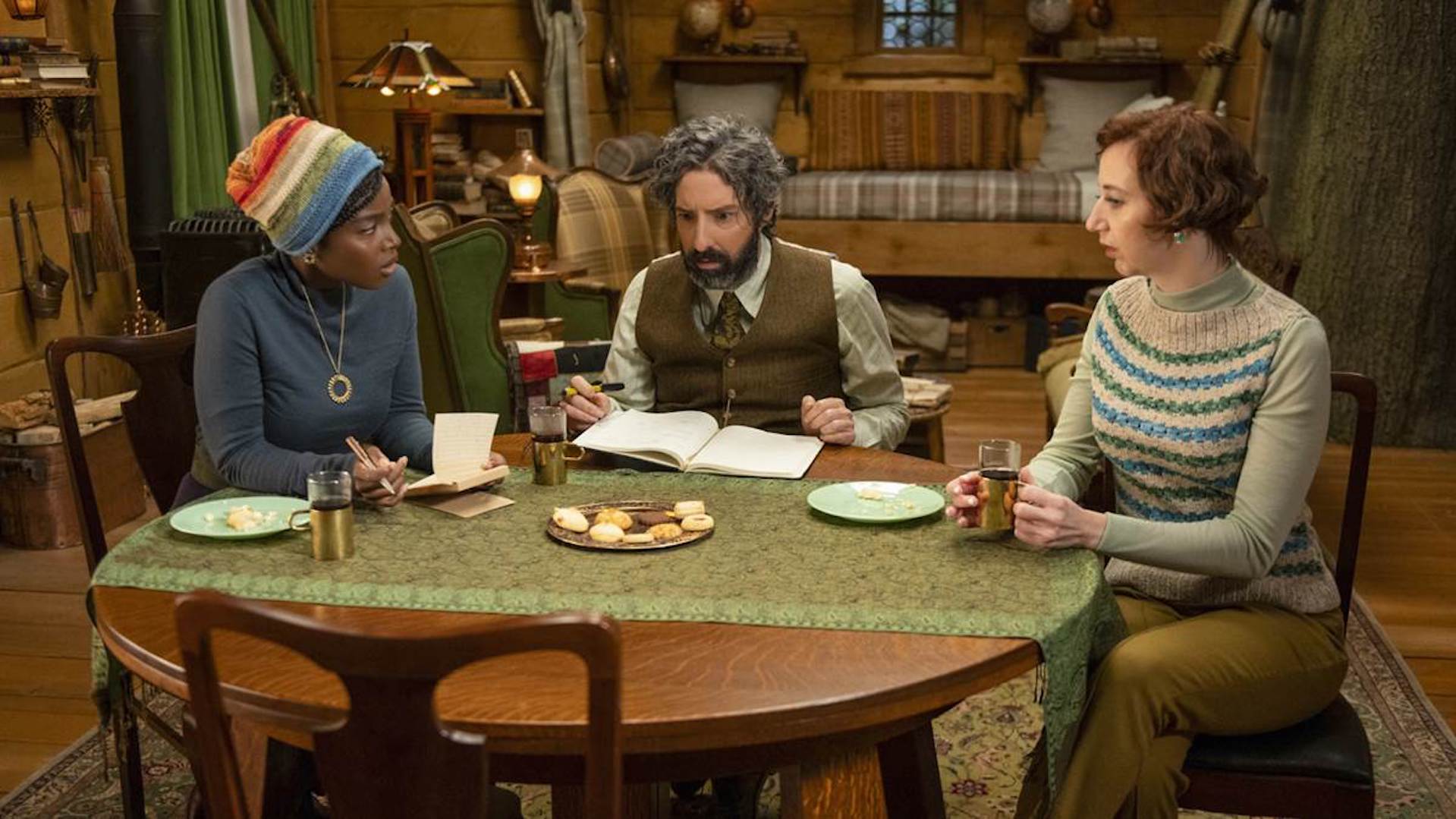 (Although I reviewed Episodes 1 and 2 of “The Mysterious Benedict Society” without giving too much away, that is not the case with this review and all future reviews for this show. Spoilers ahead.)

When Episode 3, “Depends on the Wagon” begins, the children are left reeling from the discovery that the elusive leader of the Institute bears a shocking resemblance to Mr. Benedict. In fact, the Institute’s leader is Mr. Benedict’s long-lost twin, played by Hale in a dual role.

In one of the most significant departures from the book, the show reveals that the two brothers know of each other’s existence. Although they were close as children, Mr. Benedict was adopted when he was twelve by a family that only had room for one child. Despite promising to return for his brother (then named Nathaniel), by the time Mr. Benedict returned, his sibling had already given up on him and fled from the orphanage. Bitter and resentful, Nathaniel changed his name to L.D. Curtain and began to find significant scholarly success.

None of this is Mr. Benedict’s fault, but he nonetheless engages in self-flagellation for failing to stay connected with his brother. For his part, Dr. Curtain is naturally affected by the perceived betrayal of Mr. Benedict; when Rhonda and Number Two research Dr. L.D. Curtain, they discover that he (1) never takes photos and (2) has done everything in his power to scrub “Nathaniel” from the record. It’s an unexpected change to make, but I suppose it could fit with the themes of empathy, trust, and family, so I’m not against it. Besides, Hale’s Curtain is wonderful — capable of being outwardly kind, controlled, and vaguely menacing all at once.

Plus, the revelation that the man behind the Emergency is Mr. Benedict’s brother gives Kristen Schaal and MaameYaa Boafo the chance to flex their comedic chops, deadpan style, as they observe Mr. Benedict spiralling into grief and regret. And while Nicolas Benedict’s character may devolve a bit too much, becoming consumed by neuroses very quickly, Tony Hale the actor does reliably well with the material he’s given.

But enough about the adults, because we’re here for the Society! Back at the Institute, the children are busy dredging their way through tedious, unconventional classes when they come to two unpleasant realizations. The first comes when Reynie spies a familiar face working as a janitor at the Institute: Mr. Bloom, who used to conduct periodic inspections of the Stonetown Orphanage. Mr. Bloom fails to recognize Reynie — in fact, he asserts that he is not Mr. Bloom — and the children realize that the school’s maintenance workers (known at the Institute as “Helpers”) have all been brainswept and put to work by Dr. Curtain.

Surprisingly, the children accept this revelation quite easily. While it’s true that the children do know another person who has lost his memories (Milligan, although in my previous review, I failed to mention his amnesia when discussing him), their sudden acceptance of this disturbing fact is strange — the children’s encounter with Mr. Bloom should have lingered with them longer and established the danger that the Society faces at the Institute.

In fact, by the end of episode, half of the Society is threatened with the loss of their own memories. In a clever update from the book, the Institute regularly posts a student ranking list on a display screen. The upper echelon of students have their names displayed in green, which is where Reynie and Sticky’s names are found. However, less successful students find their names ominously displayed in yellow, and that’s where Kate and Constance find themselves. (Sticky, unsuccessfully trying to comfort the girls: “In China, yellow means good luck?”).

In any normal school, Kate and Constance would simply remain mediocre in their classes, but the Institute is no normal school; if a student repeatedly fails in their studies, their name is displayed in red, and he or she is brainswept and unceremoniously taken via barge off the island. One unlucky student named Charlie Peters finds himself in this category, and away he goes.

The display is an effective way to raise the stakes, and the episode ends on a cliffhanger when Mr. Benedict and company, communicating from the mainland through Morse code, suggest cheating to help Kate and Constance. For truth-loving minds adverse to cheating — and somewhat shaken from Dr. Curtain’s unexpected kinship to Mr. Benedict — the children find themselves experiencing doubt. Reynie finds himself in the most turmoil, as his meteoric academic rise at the Institute has drawn the approval of Dr. Curtain. Overall, the episode ends with promise and some hope for character growth.

EPISODE FOUR: “A Whisper, Not a Shout”

And then, the subsequent episode does little but spin its wheels, squandering most of the potential of Episode 3 and leaving me pretty frustrated.

Let’s start with the adults. In the previous episodes, they’ve been entertaining enough, but here they bog the episode down with exposition-heavy subplots that don’t go anywhere. Schaal and Boafo are usually given some of the show’s better material, but here they’re stuck in a terribly clunky subplot.

The premise: We discover that Rhonda has been painting messages of resistance in Stonetown to give hope to Emergency-afflicted citizens, despite the fact that Dr. Curtain has men looking out for her and the rest of her companions. When Number Two finds out about the risks Rhonda is taking, Number Two chastises Rhonda until Rhonda threatens to leave the group. Writing messages to the Stonetown populace, Rhonda says, is both necessary for the public and herself — in her words, it keeps her sane.

Now, I’d actually be fine with this subplot if it took the time to really let us marinate in the atmosphere of hopelessness that the Emergency has created. If the show devoted time to contrasting the palpable danger that Rhonda is putting the group in with the bleakness of Stonetown, I’d be happy. Unfortunately, the show contents itself with telling, not showing; Schaal and Boafo bicker and trade barbs, which is not as amusing as one might expect given the caliber of these two actresses.

The subplot comes to a poor resolution, too. While Number Two eventually joins Rhonda and helps her spray paint her optimistic messages, what’s one of Number Two’s main reasons for supporting her colleague? Why, Number Two suddenly flashbacks to her younger self playing competitive billiards, of all things! As Young Number Two meticulously uses a pool brush on the felt, her opponent remarks that the brush is unhelpful. Unfazed, Number Two then replies that brushing the table “keeps me sane.”

I guess that having Number Two echo Rhonda’s previous sentiments is supposed to help Number Two empathize with Rhonda, but the flashback is so completely out of left field and horribly forced (not to mention a false equivalency to Rhonda’s risky choices) that it’s almost comical. Almost — ultimately, it’s so lazily told that it leaves a sour taste in the mouth. Hopefully, this is the last we hear of Rhonda and Number Two fighting.

Meanwhile, Mr. Benedict and Milligan stakeout Nomansan Island on a nearby mountain via telescope. It’s not as painful as the stuff with Rhonda and Number Two (in fact, Milligan gets the chance to emote by reflecting on his amnesia), but it’s also not particularly interesting. The eventual payoff — that Dr. Curtain has a secret entrance hidden under a boulder — fails to compensate for the sheer amount of talking that the adults do.

Thank God for the children, because they really do carry this episode. They’re actually starting to feel like a team and it’s great to see these actors interact. There’s a wonderfully executed scene at the beginning where the Society spies on Dr. Curtain’s personal journal that’s particularly fun to see. It would probably enhance the show if we heard just a bit more about the Society’s feelings on family, trust, and how being an orphan has affected them (since Episode 3 put these themes front and center with Benedict/Curtain) but overall, the stuff with the Society is going reasonably well.

Yet, although the Society continues to deepen their bond, their attempts to cheat go poorly. The children brush up on their Morse code in order to relay answers to Kate and Constance in class, but their efforts are ultimately for naught. Surprisingly, Constance ignores Reynie’s attempts to help her and “begins to try” in her classes, using more of her precocious intelligence (and less of her stubbornness) to boost her class rank. At the same time, Sticky tries to tap out answers to Kate during a big test, but is caught by the teacher and sent to see Dr. Curtain.

As Sticky waits for Dr. Curtain, he spends his time in the Waiting Room — an eerie, white room where everything is slightly uneven and the clock on the wall occasionally skips. In the book, students sent to the Waiting Room are forced to stay in a pool of odious, dark mud crawling with various insects, but I suppose that was too much for Disney. At any rate, the show’s Waiting Room still tortures its poor victims, albeit psychologically as opposed to physically. To his credit, a nervous Sticky refuses to sell out Kate when Dr. Curtain interrogates him about his cheating and eventually Sticky is let go. In later episodes, I suspect we’ll return to the subject of Sticky cheating, which is left unresolved as of now.

Just because Sticky doesn’t name Kate as his accomplice doesn’t mean that she’s out of the woods, though. Left to her own devices on the test after Sticky goes to the Waiting Room, Kate struggles and soon finds her name displayed in red. Although I would have preferred for the rest of the Society to be more shocked and dismayed at Kate’s impending demise (Mystic Inscho delivery of “I don’t know what to say” to Kate is awfully bland), Emmy DeOliveira strikes just the right tone of forced stoicism and sadness as she says what she believes is goodbye to her teammates.

Of course, we have four more episodes, so Kate can’t be brainswept and barged off the island. And what explanation is found for keeping Kate at the Institute?

Well, tetherball, of course! In a scene that irritated the hell out of me, the show takes misplaced inspiration from Number Two’s terrible billiards flashback. As Kate is preparing to leave the Institute, she stumbles across the school’s tetherball team and the team’s haughty captain, Martina Crowe, takes notice of Kate’s athletic abilities. Martina then extends her surprising influence over Dr. Curtain to convince him to let Kate stay on a tetherball scholarship.

Aside from the fact that Kate’s tetherball scholarship is somehow more implausible of a reason for her to stay at the Institute than if the show had decided to pull a literal Deus ex machina and have God himself miraculously move Kate’s name from the red to the green, I’m now not sure if the Society’s cheating amounted to much in the end. It’s a disappointing payoff to an intriguing setup.

The fourth episode by no means derails the show, but the episode’s lazy writing worries me. Thus far, “The Mysterious Benedict Society” has touched on some trenchant issues and worthwhile themes. Here’s hoping the next four episodes demonstrate enough faith in the audience to really grapple with them.