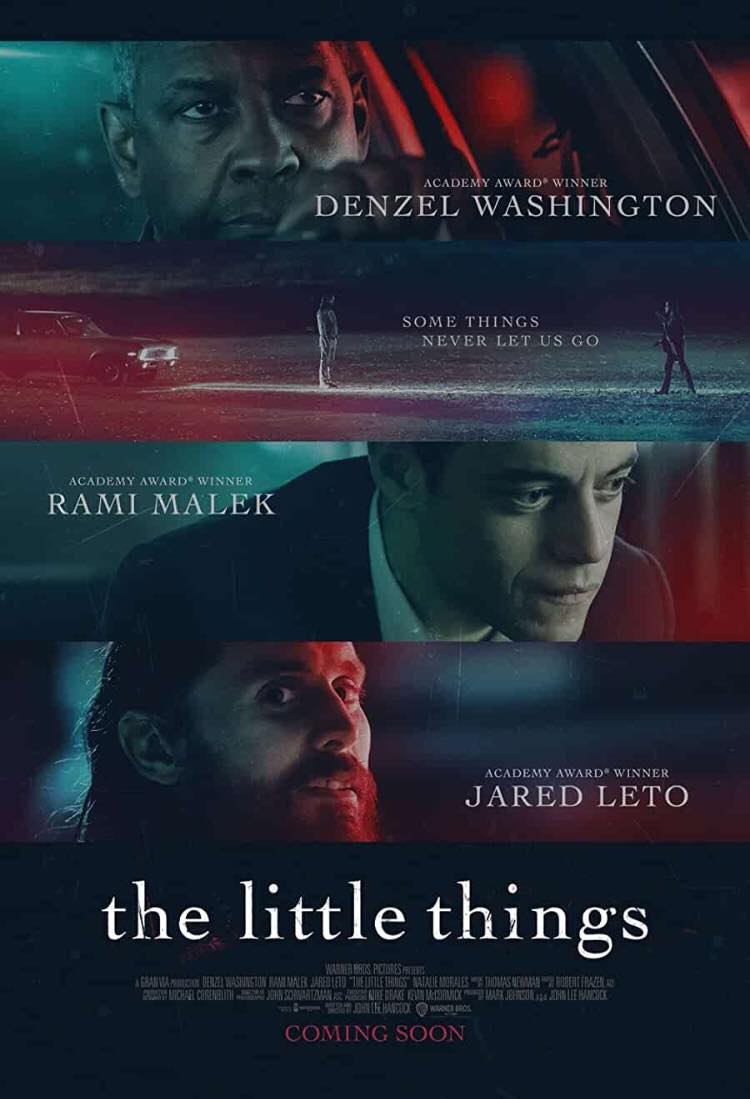 The Little Things is a new cop thriller starring Denzel Washington. For me, that’s all you needed to say. I am perhaps very biased when it comes to Mr. Washington. My friends and family know two things to be true: I love film and I love Denzel Washington. I grew up with Mr. Washington thanks to Remember the Titans and he’s remained my favorite person in film to this day. Any new Denzel Washington movie should be a cause to celebrate. So what’s the story with this latest film? Writer/director John Lee Hancock (The Blind Side, Saving Mr. Banks, The Founder) has crafted a detective mystery with three different Academy-Award-Winning actors. Joining Mr. Washington are Rami Malek and Jared Leto. This script by Hancock managed to get three Oscar-caliber actors? This should be great!

So why is it not? Well let’s go over the plot first. The film, set in 1990, stars Washington as Joe Deacon, a deputy sheriff who lives alone with his dog in Kern County outside of Los Angeles. Called in by his superior, he goes to L.A to handle evidence of a recent murder. You see, Deacon used to be a detective in L.A but he left five years ago under mysterious circumstances. Back at his old stomping ground, Deacon is introduced to Jimmy Baxter (Malek), a lead detective investigating another murder. Funny enough, this murder is reminiscent of one Deacon never solved when he was a detective. He begins to obsess over the case and both Baxter and Deacon team up to look for the culprit. If you’re wondering where Jared Leto fits into all of this, I’ll not say much as his character comes in around an hour into the film. Let’s just say the dude’s weird. He’s either the killer or just a massive troll. Deacon and Baxter soon become convinced that this is their guy and a game of cat-and-mouse thus begins.

First off let’s get this out of the way: I have to bring up the trailer. On the one hand, I think it’s great. It is expertly edited and scored to deliver maximum intrigue. On the other hand, if you’ve seen the trailer, you’ve seen much of the movie. I know it’s a cliché to say that a trailer showed the whole movie in 2 and ½ minutes…but guys this trailer really showed you the whole movie in 2 and ½ minutes. If you watch the trailer and have seen even a few cop/crime mysteries, the last act of this movie isn’t hard to predict. This isn’t the film’s fault though. I can still admire a movie even if I know where it’s going. It’s all about the execution. That’s the problem here. Hancock has said the first draft of this script was registered with the Writer’s Guild in 1993. This may explain why the film feels less than fresh. It’s funny because I see some other reviews saying The Little Things is just a rip-off of the David Fincher classic Se7en even though Se7en came out in 1995. Still there’s something to be said here: Se7en is now 26 years old. Yet I will likely never forget how messed-up and captivating the story in Se7en is. It’s been probably close to ten years since I last saw it but I certainly remember what happens in that movie. I will likely forget I saw The Little Things by next year.

I see what the film is trying to do. It’s trying to show how the awful and morbid things you see as a detective can affect your psyche. Deacon has a troubled past and he sees that Baxter could be headed down that same road. And where the plot ends up going in the third act is something intriguing. I won’t say anything but it really does ask a big question at the end. Literally the last scene of the film in particular is the only surprise the film gave me. And, since we’re talking about things I liked, the opening is memorably tense. Also Hancock films nighttime in L.A. as something really sleazy and unclean (I’m going to guess that this film wasn’t made in partnership with L.A’s tourism office). Hancock also adds nice touches like visualizing Deacon’s trauma. He is so haunted by those he couldn’t save that he imagines their corpses visiting him when he’s alone. It’s these little things in The Little Things that I can point to and compliment. That and there’s a line Washington says in an integration scene that made me laugh out loud.

However, there’s still something about this movie that just feels off. I can’t quite put my finger on it but there’s something that kept me at an arm’s distance. Look, as you may know, I love a good mystery. It’d have to be a pretty bad mystery in a pretty bad movie for me not to want to solve it. Yet most of the film never rises above moderately interesting. Sure there’s the last half hour but that doesn’t save the movie. We’d already gotten 90 minutes of serviceable-but-not-all-that-exciting material. One of the problems I believe is with the way the film handles its characters. I feel like this film doesn’t have a good grip on what makes a memorable character. It doesn’t tell us anything besides this: Deacon has a traumatic past and Baxter is a family man with a growing obsession. Besides that, there’s not much character development left to talk about. This is the same for pretty much all the characters in here. God forbid you’re one of the serial killer’s victims because we get to know nothing about you. With these main characters, I obviously didn’t want them to die but I wasn’t on the edge of my seat if they lived.

So is this movie worth your time? Is it worth getting HBO Max for? Should you go back to the theater to see it? I’m afraid I have to say no to all three. This is a film with big potential yet it doesn’t live up to it. This is such a bland and virtually tasteless thriller. Most of the problem is that it doesn’t stand out from the crowd. When there are so many cop dramas and true crime mysteries out there, you have to be better than just fine. Washington is always going to be charismatic but this is for sure one of his lesser films. I don’t think this is a terrible film. I might not even think it’s bad. But, after spending two hours with this story, there’s not all that much of a good movie there either.

Lifelong Chicagoan and film school graduate. Been passionate about film since I was a wee kid so writing about it feels like home.