Watercooler Reviews | The Haunting of Bly Manor: A Love Story Inside a Ghost Story 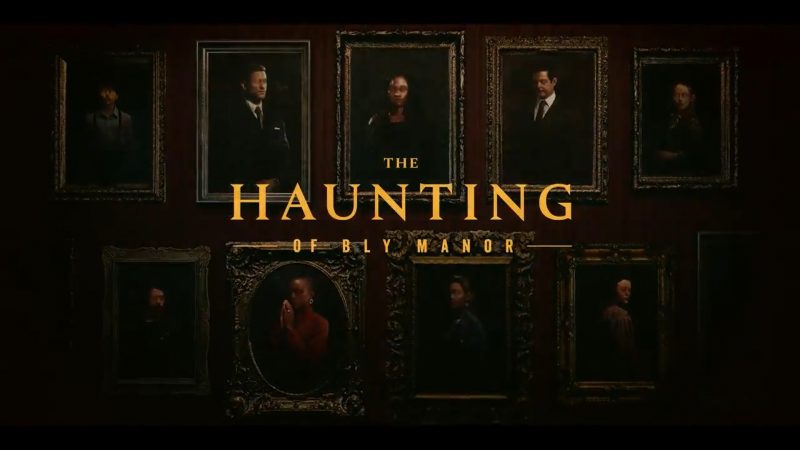 “Silence lay steadily against the wood and stone of Hill House, and whatever walked there, walked…together.” These are the final words that cap the masterpiece Netflix original show, The Haunting of Hill House, which first premiered in the fall of 2018. Since the initial release, Hill House has continued to impact viewers, old and new, with its gorgeous cinematography, fantastic writing, and eerie hidden ghosts. Many fans have reveled in, what most thought, would be the first and final installation of the Netflix Original. Yet, while the Crain family’s story may be over, the scares are just beginning for the Wingrave family and their nanny in Mike Flanagan’s newest creation, The Haunting of Bly Manor.

The Haunting of Bly Manor is loosely based on the 1898 horror novella, The Turn of the Screw by Henry James. It centers around a young American woman, Dani Clayton, played by the enchanting Victoria Pedretti, who many will recognize as Nell Crain from Hill House. Set in 1987, the show follows Dani after she responds to a job listing for a live-in nanny position in the English countryside. The seemingly straightforward job requires taking care of two orphaned children whose previous governess committed suicide the year prior. After an uncomfortable job interview with the children’s alcoholic and pompous uncle, Henry Wingrave (played by Henry Thomas, also known as Young Hugh Crain from Hill House), she is offered the job and makes the long trip out to Bly.

While at the idyllic manor, we meet Flora (Amelie Bea Smith) and Miles (Benjamin Evan Ainsworth), the precocious and mysterious children Dani is tasked with caring for, who insist everything about Bly is “perfectly splendid.” As Dani becomes acquainted with the house, we are also introduced to the various characters that keep Bly up and running. We meet the religious and spacey caregiver, Hannah Grose (T’Nia Miller), the punny and warm cook, Owen Sharma (Rahul Kohli), and the blunt and intriguing gardener, Jamie (Amelia Eve). The various adults of Bly inform Dani of the tragedy that befell the previous au pair, Rebecca Jessel (Tahirah Sharif), who seemingly took her own life after getting her heart broken by the charming and manipulative former valet, Peter Quint (Oliver Jackson-Cohen, who played Luke Crain in Hill House).

As Dani adjusts to life at Bly Manor and the, oftentimes eerie, children who inhabit it, she begins to experience more and more strange happenings around the grounds, particularly at night. Most notable of the hauntings is a reappearing trail of muddy footprints leading out of the house to the lake, made by the “lady” who lives there, as well as Dani’s own personal poltergeist – a shadowy man with white glowing eyes who appears behind Dani anytime she looks in anything reflective. We later learn this shadow man is Dani’s deceased fiancé, Edmund (Roby Attal), who died suddenly and tragically a year ago. Edmund’s ghost is one of the best examples of a recurring theme Bly Manor lovingly toys with: the ways the world can trap us and, furthermore, the ways we can trap ourselves in the world.

Yet, despite all the disquiet at Bly, a beautiful romance emerges through the cracks of this “ghost story.” We learn early on Dani is struggling to accept her own sexuality, her attraction to women being the very thing that broke up her previous relationship with Edmund prior to his death. The chemistry between Dani and Jamie is undeniable, and their moments together are tender and truthful, yet often broken by the appearance of Edmund’s ghost. The apparitions of Dani’s deceased fiancé work as a physical embodiment of Dani’s shame surrounding her sexuality, as well as her guilt around Edmund’s death. The only time Dani ever sees Edmund’s ghost is when she is looking at her own reflection – it is only then, when she is forced to face herself and who she is – that she sees the embodiment of her shame looming behind her shoulder. And no matter how many times she tries to force away the apparition, usually by covering the mirrors in her room, Edmund appears again and again.

There are many aspects of Bly Manor one can applaud. The score is haunting and tender at the same time, the performances by everyone in the cast are award-worthy, and the lilting, poetic monologues peppered throughout the script are theatrical in the absolute best way. Yet, what makes Bly Manor so touching and frightening, are the human stories at its core. At the end of the series, an adult Flora (Christie Burke) makes a profound observation to an older Jamie (the narrator of our tale, played by Carla Gugino, also known as Olivia Crain from Hill House). Flora says Jamie claimed the story she was telling, “was a ghost story,” but felt this description was in fact wrong. “It isn’t [a ghost story],” Flora says to Jamie, “it’s a love story.” To this, Jamie responds with a coy smile and says, “Same thing.” At its center, Bly Manor is a gothic romance masquerading itself as a horror story. It shines a light on something far more terrifying than any ghost or demon: how frightening it is to love someone wholly and completely, all while knowing one day, you will lose them.

Bly Manor explores the many forms love can take, both positive and negative. We see the sacrificial love of Dani, the obsessive love of Peter, the vulnerable love of Jamie, the dedicated love of Owen, the misguided love of Rebecca, and the rotten love of the Lady in the Lake (played by Kate Siegel or, Theo Crain, from Hill House). While Hill House was a testament to familial love, Bly Manor is a testament to romantic love, and how, as  Jamie put it, “sometimes, once in a blue Goddamned moon, someone…just might be worth the effort.” It’s a truly beautiful statement to make, especially during a time in our world that often feels filled to the brim with hatred.

All that being said, there are moments of Bly Manor that felt weaker compared to its predecessor. The writing was not as strong as Hill House, and it often felt like the story lacked the gravity and impact it was hoping to harness.  The ghosts and thrills were far less nail-biting than Hill House, and I often found myself missing the long, drawn-out shots that made Hill House so deliciously tense at times. There was a disappointing lack of twists and turns, and the structure of the series felt more erratic in comparison to Hill House. The “mystery” that unfolded before us didn’t seem to pack quite as strong of a punch and sometimes the writing felt overindulgent, instead of human and raw. On a more positive note, I did love how Bly Manor featured a far more diverse cast, and chose to highlight a lesbian love story at its center – although, the writers do get points off for falling on the “Dead Lesbian Trope” at the end, which I didn’t quite agree with, both because I consider it lazy writing and because it made me cry. A lot.

And yet, despite the fact Bly Manor tore my heart out more times than I could count, I know I’ll rewatch it again next year, and the year after that, same as I do with Hill House every fall. Bly Manor was the perfect mix of scary, heartbreaking, and thought-provoking, and the, albeit brief, love stories throughout the show do make you question: What is love? And what happens to love when we hold onto it longer than the universe allows?

As I completed my first watch of Bly Manor, I found myself asking what draws viewers, like me, to a show which almost guarantees an unhappy ending? Morbidity and tragedy are weaved into every episode, and the show makes it clear from the beginning this is not a story that will end with, “and they lived happily ever after.” So what keeps us coming back to these macabre tales? Maybe it’s something as minute as the music, the casting, the writing, or the scares. Or maybe it’s something a little more than that. Maybe it’s because there’s something cathartic in seeing characters live out their grief clumsily, knowing their pain will end with the season finale. Maybe it gives us a little bit of release from our own personal pain, shame, and guilt by allowing us to see through the eyes of characters who’s failures and shortcomings are difficult to watch, but temporary and intangible. Maybe it’s because even tragedies leave you feeling a little bit hopeful for the future – our own personal hubris convincing us maybe our story will be the exception from the pain. Maybe it’s simply the fact that Bly Manor is an entrancing story of love, denial, grief, life, death, and heartbreak. Maybe it’s all of the above. Maybe it’s none. I suppose I will only ever know what this story means to me.

Overall, The Haunting of Bly Manor is a show that will have a lasting impact on its viewers, long after the screens have gone dark and the lights have gone out. When you’re left with nothing else but yourself and the shadows in the corners of the room that seem to almost move in the stillness of the night, perhaps then you’ll wonder to yourself what hidden ghosts live in the background of your own mind? Bly Manor reminds us that, in the end, none of us are ever truly alone. As many of the characters throughout the series said, “It’s you. It’s me. It’s us.” Together we face the ghosts. Together.