The Forever Purge is the fifth film in the Purge franchise. It’s strange because I’ve seen all five films and they’ve gotten increasingly better with each one. I haven’t seen the first entry since I saw it way back in 2013. Man was I unimpressed. Talk about taking an interesting premise and squandering it. I was not the only one who felt that and it’s as if the creators of this franchise heard those complaints. Soon after the first film, we got 2014’s The Purge: Anarchy. While still a film I felt was pretty underwhelming, it was a slight improvement over the first film. Then came the third and fourth films, 2016’s The Purge: Election Year and 2018’s The First Purge. These two I remember actually having a decent time with. Now, before I get carried away, I think I should explain the basic concept of all the films. If you are unfamiliar with the premise, it’s a simple and frightening concept: There’s a new political party in America. They call themselves the New Founding Fathers of America (NFFA). With this new power, they come up with the purge, an annual day where all crime (including murder) is legal for twelve consecutive hours. No police, medic or firefighter will come help you. For twelve hours, you are on your own.

Now I say I’ve seen all of these films but I most admit…I had to read some of the Wikipedia summaries to remind me what had happened. I have found the last two entries entertaining, yes, but these films don’t leave a huge impact years later. I did however say that these films seem to get better with each installment and that seems to be the case this time around too. In fact, this might be the best installment yet (I say yet even thought this might be the last one). This film as a horror film isn’t that great. But as an action flick? It was pretty effective. This entry is essentially a siege picture. You know movies like Assault on Prescient 13? 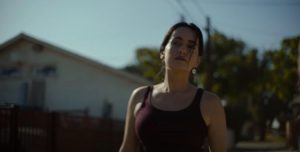 It’s like that. But instead ofone police station, the siege is on the entire state of Texas. Most Purge films each have a new set of characters. In this film, we follow Juan (Tenoch Huerta) and Adela (Ana de la Reguera). They are two migrants entering the US trying escape drug cartels in Mexico. Eventually they carve out a simple life for themselves. Juan works as a farmhand on a raunch belonging to the Tucker family. Caleb Tucker (the always welcome Will Patton) is the patriarch and he works with his son Dylan (Josh Lucas) and daughter Harper (Leven Rambin). Two other characters in the film are Dylan’s pregnant wife Cassidy (Cassidy Freeman) and Juan’s friend and fellow farmhand T.T. (Alejandro Edda).

Now Dylan isn’t necessarily the most welcoming when it comes to other races but Caleb treats Juan and T.T.  respectfully. On this latest purge day, each pair of families go off to seek shelter. This is where, in the other films, most of the action takes place. However, The Forever Purge differs from the other films in that most of the action takes place after the purge. You see there are several crazy zealots wandering around thinking the purge shouldn’t just be for twelve short hours. These people believe the purge should last forever. With this, “forever purge” becomes a thing that citizens rally behind. The worst of them claim to be “purifiers” who want to take (by force) America back from those they consider un-American. Soon the state of Texas turns into chaos and the farmhands and the Tuckers must find a way out. And you know what guys? I actually cared if they made it. We may not know too much about these people but I really did root for them to survive. What makes this film and the last entries so entertaining is that fight for survival. It’s ordinary people in a bad situation trying to fight against pure black-hearted evil. The action in the last third of this film is nothing you haven’t seen before but it works because it filled me with tension. It made me wonder how these characters were going to get out of each new mess. 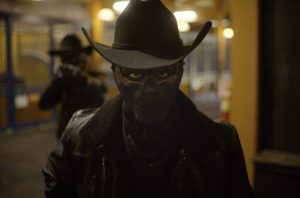 The Purge films have always worked better as action films rather than horror features. In this entry, there are typical jump scares and none of the them are scary. Jump scares can be good if they actually mean something. But here, it’s nothing to be scared of. This is the classic “it was just the cat” scare. It’s usually accompanied by a sudden loud noise to jolt you out of your seat. These jump scares are really cheap. If you want me to be scared, give me something to be scarred of. If you want to know how to do good jump scares, may I turn you toward the films of James Wan. Director Everardo Gout and series creator/screenwriter James DeMonaco aren’t there yet but give them time. With that being said, the Purge films have always been more disturbing than scary. Some purgers are so gleeful in their bloodbath that they even put on costumes and masks. They really make a night out of it. Frankly, I have ask this: do we even need the jump scares? I know they’re sadly typical in studio horror films. But the idea that your fellow man can take you out just because he can is simply scary enough on its’ own.

If you are looking for subtly in these films, may I suggest a different franchise. The main goal is to entertain, sure, but the series has a message on its’ mind too. As pointed out by characters in these films, the purge is okay for the super wealthy. They have special home security systems and enough protection to not worry about such things. However the real victims of the purge are the ones who can’t afford such toys. Are you homeless on purge night? Good luck. Are you a different skin color besides white? You better learn how to fight. Especially in Election Night and The First Purge, the NFFA are found out to be a wealthy elite who just want to get rid of the lower classes. If there’s another hook to this series, it’s that the last couple of movies have focused on non-white characters fighting back. The First Purge had a black man fighting off mercenaries in Staten Island. This is about Mexican immigrants fighting off against bloodthirsty bigots. With those premises, I’ll just say this: it’s very satisfying when our heroes get the upper hand. These villains are so despicable that you might think they are too cartoonish. To that I say, “have you ever been to a Trump rally?”

Going into The Forever Purge, I didn’t know what to expect. But coming out of it, I felt like I got an effective thrill. James DeMonaco has certainly been the lifeblood that has kept this franchise going. Having written all five films and directed the first three, it’s an interesting calling card and I’m curious what he’ll do in the future. This might be the last Purge film but, if it is, they went out with a bang. The best one? It’s a little soon to say but it might just be. The Purge films have evolved from a missed opportunity to an interesting expansion all within eight years. They may not have made that great Purge film but they’ve made a pretty decent one this time around. 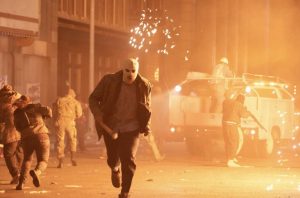