Okay, maybe the whole detour from the main series storyline in Beard After Hours was in actuality just a plot to make me forget how much I now dislike Nate. Wasting no time this week, here’s why:

Nathan started out in series 1 as the underdog, pushed around by Jamie and Isaac and pretty much everyone that managed to notice him in the first place – everyone, that is, except Ted. We watched him gain some confidence when Ted decided to validate him and try out one of his plays, becoming an even more special moment for football fans everywhere when the play worked in Richmond’s favor. And I’ve touched on this before: part of the reason Nate was such an integral character in the first series was what he could, and likely did, come to represent for Premier League fans everywhere. Not that Premier League fans are out here convinced they could waltz into Emirates Stadium (I’m an Arsenal fan, sorry) and nab a job as even a kit man, an opportunity I’m sure is more competitive than the Cup Final itself. But you’d be hard pressed to find fans of anything as obsessive, neurotic, and… diehard as soccer {football} fans. It’s not unrealistic to assume that they’d know the game like the back of their hand, even if that knowledge often manifests in unmannerly blame shown to a coach, manager, opposing team fan, etc. The bottom line is, for the most part, diehard football fans don’t need the offside rule explained to them.

Enter Nate, the living and breathing realization of this, proving a point he never thought he’d get to prove. That’s an important portrayal onscreen. But that was series 1, and in series 2, we’re not looking at the same Nate. I know over the course of the episodes we’ve seen so far – most of them, that is – Nate’s relationship with his father has come into play. But while not necessarily too late, it is too little. Nate’s behavior has been explained in this regard, but the explanation means nothing because it does not double as an excuse. It also strikes me that after Nate’s success taking over for Ted during his mid-game panic attack, he’s been increasingly unrestricted in both his treatment of colleagues he considers beneath him, and his not always well-intentioned ambition. For example: besides the obvious moments (the nasty comments to Will, the rejection of the kindhearted jersey gifted to him, KISSING KEELEY – YIKES), Nate’s confession/comment before the Wembley match stood out. Ted confessed his panic attack, Roy his professional shortcomings, Higgins a mistake he’s been sitting on, Coach Beard that he was on mushrooms for one of the season’s previous matches (not surprising, honestly). Nate, meanwhile, simply gives the equivalent of an insufficient answer to the typical “what are your weaknesses?” interview question, a humble brag; played off by Ted and the rest as a great idea, and we move on. My point being, Nate has been dropping hints, sometimes not so subtly, at his hunger for power via his growing boldness throughout the whole of series 2. His persistent questioning of his peers about whether or not they ever think about being the one in charge? Not a good look. And more people should have noticed by now, frankly, besides Coach Beard. Who for some reason hasn’t brought it up again, maybe because he’s preoccupied by his newly reconfirmed love for Jane.

I dive into this Nathan character analysis to give context for his ultimate betrayal of Ted, which was where the episode left us hanging last week. Breaking Ted’s trust to leak his panic attack to the press in a probable attempt to take over more power in the Richmond coaching staff is a really uncool move. And it gave us another reason to grasp at any glimpse of James Lance’s Trent Crimm (The Independent) we can get, as it’s been too long for me without a decent scene from one of the show’s truest gems. What I find interesting here is not only the parallel between Nate breaking Ted’s trust and Trent breaking Nate’s, but also Trent’s willingness to break his code as a journalist, which implores a decent writer never to give up a source. It’ll be interesting to see what Ted’s next move is. We’ve seen him challenge himself to a slew of emotional states this season, many of which showed us a Ted we weren’t used to. His reaction to Nate could go a few ways, and I’m certain in the end he will be forgiven, but I think there’s room for some unresolved conflict at the end of Friday’s season finale.

Now, on to the non-Nate related content of Midnight Train to Royston, which you probably wouldn’t guess there was a decent chunk of based on this article so far. Rebecca kicks things off by anxiously confessing her relationship with Sam to Ted in his office, a scene ending with a nice reminder of a similar moment last year (season) as she confessed her intention to destroy the club with him at the helm. It would be interesting to be reminded of this moment, and then have Ted react differently and with less forgiveness when he inevitably confronts Nate, but we’ll have to see how his sessions with Sharon may have influenced his response. And poor Sharon – the woman gets a taste of her own medicine from her favorite patient when she tries to leave Richmond without saying goodbye in person. The goodbye letters she has written are apparently not good enough for Ted, though reading it might have changed his opinion slightly. Ted and Sharon’s relationship has grown from antagonistic to friendly without adding in the expected romance, which is always appreciated when done well on television. So, bravo on that one. Whether Ted is ever going to leave this plastic army man metaphor alone is still up in the air, but it was a nice gesture of respect to close out  character arc. How lovely, also, to play on the vulnerability of the only character to serve that purpose for everyone else. We got a brief whiff of that as she was speaking with her own therapist earlier in the series, but it’s a nice callback, and reminder.

Sam, meanwhile, is hot sh*t in the football world. So hot, that he’s caught the attention of Edwin Afuko, a self-proclaimed billionaire who “doesn’t think billionaires should exist.” He presents Sam with the opportunity to leave Richmond and play for what will be an up and coming all-African team, which leaves Sam with a huge choice to make. Continue to play with his current teammates and friends, or leave them all – and any chance at a relationship with Rebecca – behind to return home and keep fighting for causes like the DubaiAir oil spill, which as we know he was very outspoken about earlier in the season. 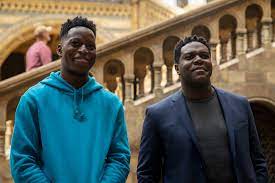 It’s quite the choice for Sam, especially after Afuko rents out an entire museum, restaurant, and introduces him to Banksy in order to help convince him to join the new team of young superstars. And it presents quite the conundrum for Rebecca, who knows only two things: she can’t bear to watch him leave no matter what the state of their relationship, and she has to respect him enough to let him make the decision for himself. I won’t try to predict the decision he’ll make. It’s safe to say though that a decision to leave would drastically change the show we’re used to in a potential series 3. 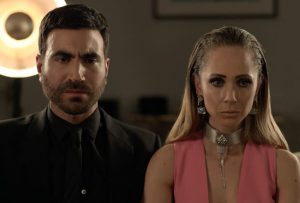 The last big takeaway from this episode is the relationship status between Roy and Keeley, which I could see “ending” or “on a break” in next week’s finale, only to have them reunite next season. I hope the writers don’t go this route; though it would be understandable and realistic, they have dedicated a grand amount of time thus far to exemplifying a healthy relationship, through all its ups and downs, onscreen. Even right down to the moment that had me worried, the pair is handling things maturely and appropriately: Keeley tells Roy about Nate’s awkward attempt to kiss her, Roy tells her about his resistance to admit his relationship status, Keeley tells Roy about Jamie’s confession of love to her at the funeral. That’s where the line is drawn, and they both know it. It hurt to watch. But Roy’s feelings are valid, as is her guilt, which I suppose is another realistic aspect of relationships not to avoid simply because your show has been branded as “feel-good.” It seems the writers can’t catch a break with either too much conflict or not enough. Either way, though, I think Keeley and Roy will ultimately be fine.

All of my theories aside, let’s gear up and get ready for the finale. I was a mess after series 1 ended, and I expect nothing less this time around.