Summertime is the latest project from Carlos Lopez Estrada. Lopez Estrada has already directed two films that I am a big fan of. There’s this year’s Raya and the Last Dragon and 2018’s Blindspotting. First, let’s address something: if you haven’t seen Blindspotting, watch it. Watch it now. I’d be totally fine if you literally stopped reading this review and started watching Blindspotting. That’s how good that film is. Anyways, Lopez Estrada has certainty captured my heart with those two films. His latest project is Summertime. The film was shot in L.A. in the summer of 2019. It’s vital that this film was shot there because of two reasons. One is that, obviously, it’s called Summertime so you probably shouldn’t shoot it in the fall. Second is that this film lives and breathes Los Angeles. You couldn’t have shot this anywhere else simply because this a love letter for the city.

This is normally where I’d tell you about the plot. Summertime isn’t a plot-heavy film though. This is more of a slice-of-life film that takes place all within one day. Not only that, it’s kind of a musical. But where a normal musical would include instruments, Summertime’s characters express themselves with spoken-word poetry. And it’s not just them performing it either. During the opening credits, the film declares that the cast also wrote their own poems. This may be why there are thirty credited writers on Summertime. In any other movie, that would be way too much. But here? Here it makes sense. Each little vignette is like its’ own little movie. How these stories and characters intersect is part of the charm of Summertime. When it comes to spoken word (or any kind of poetry), I am woefully uninformed. If this wasn’t from the director of Blindspotting (a film that also uses some spoken word rhyming), I’m not sure where on my watchlist it would fall. But, having watched it now, I am so glad I went on this ride. There are now three movies that I consider my favorites of the year so far. There’s Jon M. Chu’s In the Heights, Anders Thomas Jensen’s Riders of Justice and now Carlos Lopez Estrada’s Summertime. If you’ve read my reviews before, you know that overhyping a film is a big fear of mine. However, sometimes you just need to tell the truth: this movie is a joy to experience. 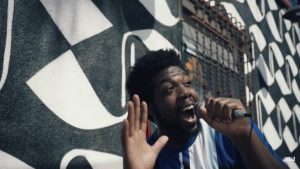 With sequence after sequence of spoken word, I’m happy to say I enjoyed each one to varying degrees. I do, of course, have my favorites. First up is Tyris Winter as Tyris (a lot of the cast use their real names as their character names). Winter has the first big scene of poetry and it hooked me right away. Explaining to a rude waitress how much he can get for fifteen dollars (the price of his over-expensive piece of toast), all Tyris wants is a good cheeseburger. His journey in the film is to find that one cheeseburger that will truly satisfy him. Yet there’s more to Tyris than just that and he has another scene that truly rocked me emotionally. The film is like that. It’s mostly a feel-good film but there are moments of true gut-wrenching emotion. The film made me laugh out loud several times yet it isn’t just some silly comedy. It wants to talk about and give voice to the many different people who inhabit Los Angeles. There’s the babysitter (Mila Cuda) on the bus tired of suppressing her homosexuality. There’s the Latina teen (Paolina Acuña-González) right on the cusp of being an adult. There’s the street tagger (Jason Alvarez) who just wants the city to know his name.  There are many different stories here and they’re all like a puzzle piece trying to explore the big picture that is L.A.

But wait! There are more standouts! Bryce Banks and Austin Antoine as rap duo Anewbyss and Rah have some of the funniest scenes in the film. Gordon Ip makes a name for himself as a fast food worker tired of working minimum wage. Raul Herrera has a beautiful piece called “Clouds” that is just the cherry on top of this wonderful film. But let’s be clear everybody: the biggest standout is definitely Marquesha Babers. Her piece (titled “Shallow” in the end credits) is passionate and powerful and the show-stopper of the whole film. In the last couple years, I can clearly think about performances that, while watching them, I thought, “This is incredible.” In 2019, it was Willem Dafoe and his thunderous monologue in The Lighthouse (a role that should have gotten him an Oscar but he didn’t even get a nomination). In 2020 it was Sidney Flanigan’s subtle hint at deep pain in Never Rarely Sometimes Always. Now, in 2021, it is Marquesha Babers in Summertime. If you don’t dig the rest of the film, that’s fine. I highly disagree with you but that’s okay. However, if you aren’t amazed by this section of the film…I don’t know. You must be a robot. Have fun not feeling any emotions. 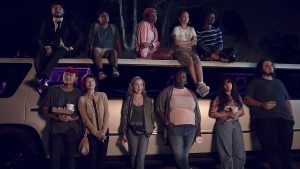 Summertime is a total surprise. I just want to hug this film. With Blindspotting, Raya and the Last Dragon, and now Summertime, Carlos López Estrada has shot up the ranks of new filmmakers to watch. Whatever he is directing next, I’m seeing it. The film is now playing in L.A. but opens at the Landmark Century Centre Cinema in Chicago starting July 16th. I am very lucky to have seen a screener of this film early because of the podcast I am on called We Be Watching Films. However, when it comes to the Landmark, I want to actually pay to see this again. I want to experience it on the big screen. I want tot take friends and support this film because it impacted me that much. Am I overhyping this a bit? Maybe for some people. But really I just don’t see how you can come out of this film and not have a smile on your face. A review should be how you honestly feel about the film and I’m not going to tone down how I feel. Summertime truly engulfed me in its’ world. It’s the kind of film you don’t see a lot of today. It truly is a joyous experience and maybe my favorite movie of the year so far. In closing, I love this movie like Anewbyss and Rah love their mothers.