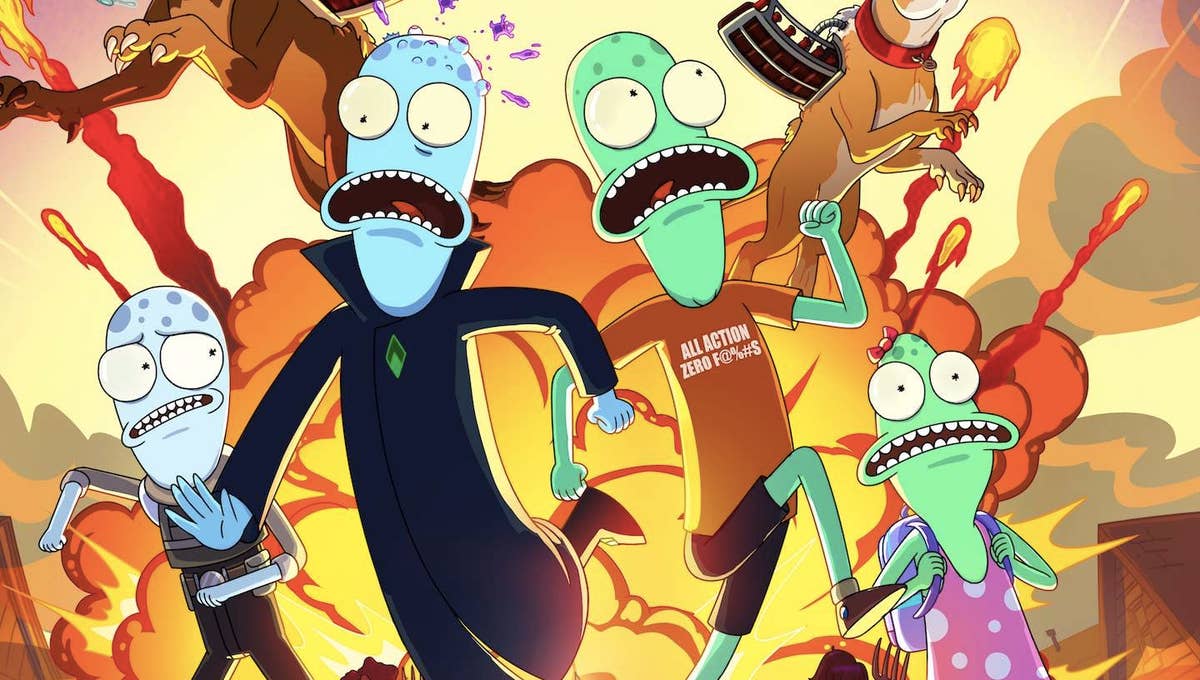 I bet by now most of you have at least heard of Rick and Morty. You know, the animated sci-fi adventure comedy from Dan Harmon and Justin Roiland that follows the adventures of the misanthropic dimensional wanderer Rick Sanchez and his teenage grandson Morty Smith. But why all this talk about Rick and Morty when this review is about Solar Opposites S2? Well, Solar Opposites is Justin Roiland’s newest show, and it is quite similar to Rick and Morty from an animation and humor standpoint.

Well, last April, still struggling with the new quarantine normal, I decided on a whim to watch the first season of Solar Opposites; it was only 8 half-hour episodes and as a Hulu original, they were all available immediately. By the time I was done watching the first season, I was largely ambivalent.

That said, it wasn’t bad enough that I was turned off from watching season 2. Far from it. After all, comedy shows that are more character-based often take a season or two to find their footing, so I was willing to give Solar Opposites the benefit of the doubt.

So, nearly a year later, a new season of Solar Opposites dropped on Hulu. An afternoon later, I had watched all 8 episodes of the new season. If I had to sum up my feelings of season 2, it’s that season 2 is more of the same, which is to say it’s not bad but not great either; it’s the definition of whelming.

The basic premise is that the home planet of an alien species known as Schlorpians was destroyed by a meteor. Before the meteor struck family-esque teams were sent out into the cosmos to find planets to terraform and colonize. This particular team – intelligent scientist Korvo (Justin Roiland), layabout pupa specialist Terry (Thomas Middlemarch), their replicants/children Yumyulack (Sean Giambrone) and Jesse (Mary Mack), and the pupa itself, the biologic engine of terraformation – crash land on Earth in the United States. Before long, they’ve largely become naturalized Earthlings, albeit with access to sci-fi tech for any wacky sitcom situation. Basically, think Rick and Morty dialed down from an 11 to something like a 6 and without the dense continuity, mixed with sitcoms like 3rd Rock From the Sun.

Before we go any further, we need to talk about the humor of Solar Opposites. It goes without saying that as a sitcom, the show lives and dies on whether or not it’s funny. On that front, it’s at least not unfunny. Back during season 1, while I thought the sitcom jokes, both straight and meta, and the sci-fi ultraviolence were amusing enough and the dramatic storyline involving the miniature society in Yumyulack’s and Jesse’s bedroom wall was surprisingly compelling, I couldn’t get past feeling like Solar Opposites was just Rick and Morty with the edges filed down. It didn’t help the animation and sci-fi naming conventions were the same and that Korvo sounded and acted like Rick but with less spine and free of an alcohol addiction.

With season 2, that feeling, along with the quality, is the same, for better and for worse. The jokes are perfectly fine sitcom fodder for a cast of characters as out there as the Schlorpians. The episode plots and gags make solid use of the freedom that animation provides. For instance, what other sitcom would ever involve genetically engineered alien dogs that hunt down and eat dinner party guests before digesting and processing them into bottles of wine?

But if you’re looking for something more dramatic and ongoing, there’s always the wall sub-plot.

In a nutshell, Yumyulack created a terrarium in his and Jesse’s bedroom wall. Instead of ants or hamsters, he fills it with random people he shrunk down to the size of ants for more often than not petty reasons. Before long, there are enough people in the wall that a complex society straight out of Metropolis and Mad Max takes form, with the resource-rich – said resources are mostly junk and the candy Jesse feeds them – living near the top under the dictatorial leadership of the Duke (Alfred Molina) while those stuck in the bottom resort to scavenging to survive.

In the first season, the central wall plot follows an office worker named Tim (Andy Daly) and a Benihana chef named Cherie (Christina Hendricks). They are both added to the terrarium around the same time, and they both find themselves in the bottom levels. As time goes on, they become leaders of the growing bottom-level revolution and a romantic item. During one entirely wall-based episode, Tim and Cherie lead the revolution, which despite heavy losses, including Cherie, is successful. When the dust settles though, the old order isn’t destroyed, but merely under Tim’s new management.

While I’m still not entirely sold on how the season 1 wall plot ended, it was surprisingly one of the most compelling things I watched back in 2020; I just couldn’t help but get invested in the nuanced characters and their struggles. I’d go so far as to say that the wall plot is what brought me back to season 2.

And sure enough, we got more wall stories in season 2. This go-round, I was left wanting. A year after the revolution, the wall, under Tim’s leadership, has become much more utopic, with everyone living peaceful and comfortable lives. The issue is that there is a serial killer on the loose, and it comes down to Bones executive producer Halk (Sterling K Brown) to track him down. In the process, Halk learns the terrible secret about Tim’s ascendance and Cherie’s death.

All that is fine and Halk is an interesting character that I’d like to see more of. It’s just that compared to season 1, season 2’s arc feels like a set-up for some future plot instead of a complete story. Mostly this is because the now requisite wall-centric episode follows Cherie and the Duke, both of whom are actually alive, over the previous year as they settle into an uneasy existence outside in the Schlorpian’s back yard. When the episode ends, there’s no paradigm shift, no resolution, just set-up. It made me think of Castlevania S1, and not in a good way.

So yeah, if you like Solar Opposites S1 and/or Rick and Morty, I think you’ll like season 2. Other than the wall-plot not having any resolution, the season is, on the whole, about as good as the first season, which is to say it’s fine for an afternoon’s entertainment.