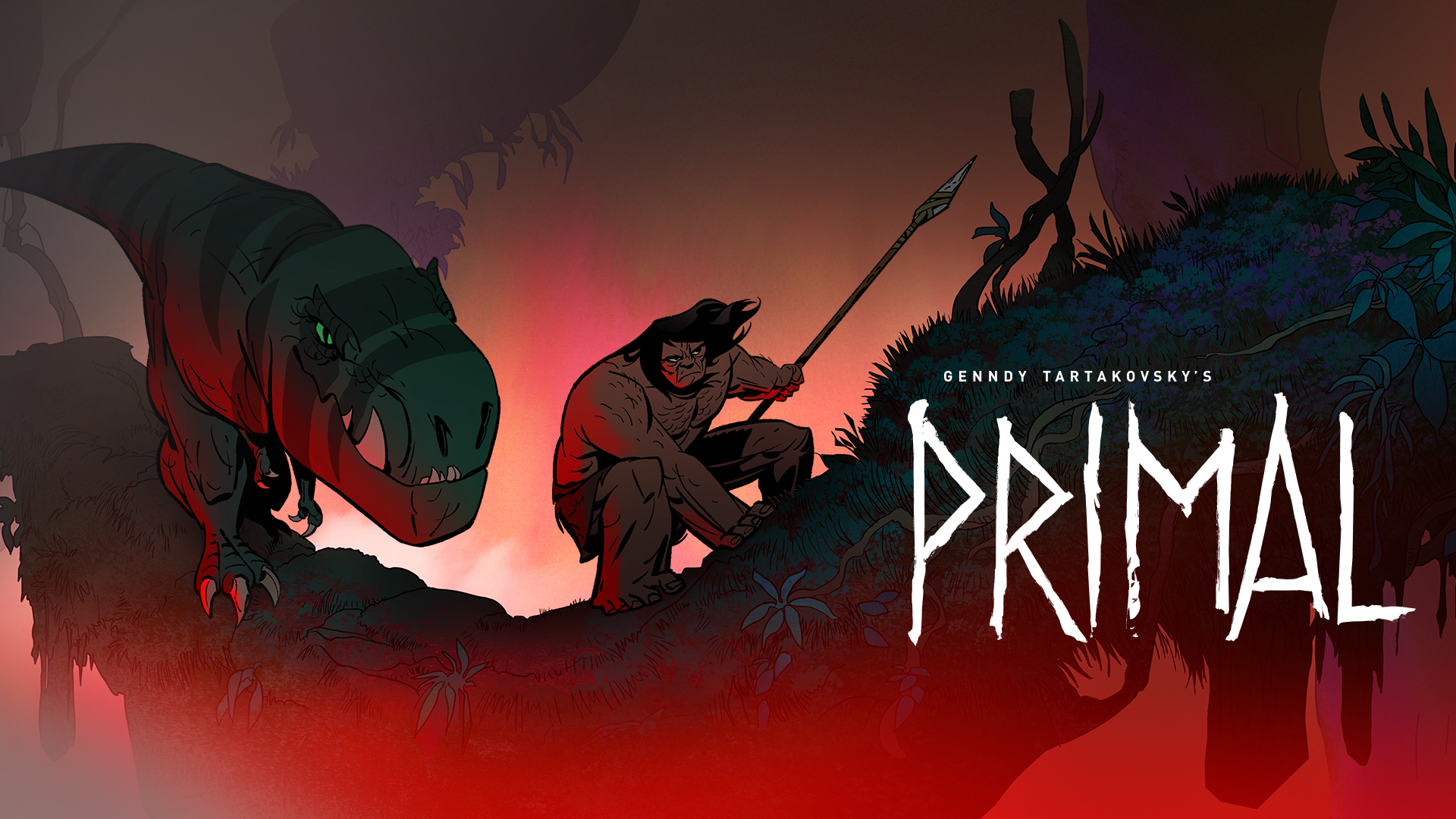 You know, it’s not an exaggeration to say Primal is not only one of the most out-there shows currently on tv, but one of the best. The latest tv project by long-time animator Genndy Tartakovsky, this Adult Swim original is both a risk and a long-time passion project.

While Tartakovsky’s return to tv with the Samurai Jack revival was met with acclaim, following it up with a dialogue-free show about a caveman and a t-rex partnering up to survive a fantastical and brutal prehistoric world isn’t exactly something that screams immediate success story. Sure, Adult Swim is the one network that would produce and air Primal, but the genre isn’t exactly thriving. There’s been a real dearth of quality prehistoric fiction besides Quest for Fire and the Earth’s Children book series. So, you know, a nearly dead genre and no-dialogue to help facilitate the story can be a tough sell.

Now as a huge fan of this criminally neglected genre, when I first heard about Primal, it immediately rocketed to the top of my most anticipated shows of 2019. And then when the first half of season one – Tartakovsky insists the first five episodes are only the first half of season one instead of season one proper – it was like a shot of adrenaline. Not only was it loaded to the brim with some of the best action sequences of 2019, but it was also filled to the brim with emotional depth. Everyone expected adrenaline and a gore-filled thrill ride, but no one – or at least, I didn’t – expect the deep and heartfelt examination of grief we got in the process. And again, all without a shred of dialogue. It’s nothing short of storytelling and animation magic.

Safe to say, after 5 episodes and one of the most brutal endings I’ve ever seen, it’s hard to not only root for more adventures with our duo but that they can find some peace in this primordial hellscape, no matter how brief. So when it was announced the back half of the season would air in October of 2020, I knew what I’d be watching over the next five weeks. Hopefully, you’ll read my thoughts on Primal S1 Part 2 as I go along. If you’d like to watch each episode as they premier, they air on Adult Swim every Sunday at 11:30 p.m. ET starting 10/4/20 and are available to stream afterward on the Adult Swim website and HBO Max. 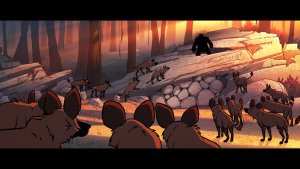 Picking up immediately after the brutal mid-season finale Rage of the Ape-Men, Spear finds himself on the knife’s edge of hope and despair. While Fang survived her brutal beating by the gorilla gladiatorial champion, she is barely clinging to life. Plus, scavengers are already appearing on the scene. Since Spear will be damned if he doesn’t let anyone else he cares for die without a fight, he will drag Spear to safety, fighting exhaustion and growing paranoia to do so.

While this is nominally a breather episode to bring the duo back to the Primal status quo,  Scent of Prey is less a breather and more a masterclass at slowly building tension. From the moment the first vultures begin circling the gore-filled arena, the fear of scavengers and predators attacking the helpless Fang weighs heavily on Spear’s mind. This only grows as wild dogs start following the two as Spear drags the near unconscious Fang into the wilderness on a makeshift travoy, and continues as the pack keeps growing. By the time this explodes into violence at the end, it’s not only a well-earned respite from the tension but a moment of catharsis – not just for Spear but the audience as well – when Fang makes her triumphant return to the action. 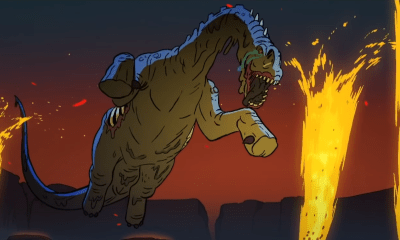 Outside of South Korea, I think it’s safe to say the zombie heyday peaked about 10 years ago. Add in a global pandemic, and you have a recipe to kill a genre that doesn’t see much in the way of innovation. So, right on cue, we get the excellent episode Plague of Madness. After a peaceful argentinosaurus gets bitten by a sick parasaurolophus, it becomes infected with a rabies-like disease that causes the long-neck to become a killing machine. After it wipes out its herd, Spear and Fang stumble across the carnage and get the infected long-neck’s attention. They then spend the rest of the episode fleeing the melting behemoth, which pursues them with an insane zeal across the land as long as it physically can.

If I had to define why I think Plague of Madness is a great zombie story (and episode of Primal), we only need to look at the sick star of the episode. As a threat, the infected argentinosaurus immediately rockets to the top of the list of most horrifying creatures in Primal. Which, you know, is saying something. Besides the body horror of flesh melting away till only bones remain, just imagine how fucked everyone’s zombie apocalypse plans would be if instead of running from a crowd of zombified humans you were running from a lizard that’s taller than a small office building? It’s less a monster and more a calamity incarnate, an implacable mountain of melting flesh. So watching Spear and Fang flee for their lives as this thing tears after them, you know this isn’t the normal chase they often get into. This isn’t a battle they can win, only outrun, which in turn heightens the tension.

But what brings this to the next level is the underlying tragedy of it all. When the beast is burning to death in the lava plain, it’s clear not only to us but to Spear that this isn’t some evil creature. Far from it. Hearing it’s cries of pain as it burns away to ash, you are reminded that this is just a sick creature, a peaceful giant made insane from suffering in a way no living thing should suffer. It’s a surprisingly emotional moment that caps off one hell of a tight and horrifying episode.

Episode 1.8: Coven of the Damned

After watching Coven of the Damned, I can see this episode ruffling some feathers. While Primal has hinted at the existence of the fantastical – the ruins in Terror Under the Blood Moon and the ape-men society in Rage of the Ape-Men in particular – it has never gone full bore fantasy. That is, until now. If the title hasn’t clued you in, Coven of the Damned revolves around a coven of crone-like hominids who are capable of serious pulp flavored magic. On top of their sacrifice and rebirth rituals, these witches are capable of shape-shifting, possession, warging, and non-interactive time travel. And it’s the standard good luck of Spear and Fang when they run into this coven as they’re sacrificing another neanderthal, and are now in need of another.

But you know what? Spear and Fang aren’t the focus here. If anyone is the focus here, it’s one of the witches; the small witch named Lula (according to Tartakovsky). This witch, the one who possesses Fang and prepares Spear for his role as the sacrifice, realizes these two have a nigh unshakable bond. Curious, she uses her time powers to look into their pasts, seeing the familial tragedies they’ve gone through. This is the crux of her story, for seeing the duo’s respective traumas reminds her of her own; a daughter (created through their ritual) who died when Lula looked away at the wrong moment. This recognition of shared pain leads to an act of pure empathy; Lula sacrifices her life so that Spear and Fang can escape the coven.

It’s simultaneously a heartbreaking and heartwarming arc, all told masterfully without an ounce of dialogue. It reminds me of the heights that A Cold Death – the mammoth episode from the first five episodes and my personal favorite – reaches with not only Primal‘s patented prehistoric action but the emotional depths that can be plumbed. That’s the beauty of Primal when it brings the emotional heft. Plus, there’s a shape-shifting witch that rides a giant pterosaur. What’s not to love? 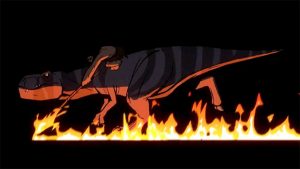 In The Night Feeder, there’s something in the forest. Coming out only at night, this monster is slaughtering anything that crosses its path, whether it’s a lone sabretooth cat or a whole herd of triceratops. And soon its sights are set on Fang and Spear.

If there’s an episode of Primal better suited to air around Halloween than The Night Feeder, I’d be left guessing what more it could do. I mean, how can you get more horror-centric than what’s essentially a prehistoric slasher flick where the monster may as well be a phantom? And when I say slasher, I mean slasher. The Night Feeder brings to mind movies like Halloween, especially when we get multiple sequences where we see the world from the perspective of the monster, including when it’s hunting and killing. Plus, you know, the carnage involved.

I’m not gonna lie though. Out of this batch of Primal episodes, The Night Feeder is my least favorite so far. That’s not to say it’s bad. Far from it. It’s a great slow-build in tension as Fang and Spear cross paths with a bloodthirsty monster that’s also invisible in the darkness. It’s just that after the momentum of Plague of Madness and the emotional heft of Coven of the Damned, The Night Feeder feels too stripped down.

Episode 1.10: Slave of the Scorpion 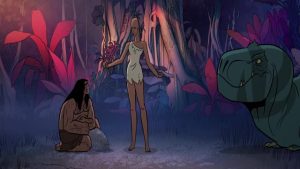 Alright, you remember when I said Coven of the Damned is a Primal game changer. You know, only a couple hundred words ago? Well, guess what. Slave of the Scorpion, the season finale for Primal S1, is a game-changer on a higher magnitude. Why you ask? Oh you know, a human from an iron-age culture washed ashore in front of Spear and Fang. Not only does she join the group, but brings something else we’ve never gotten in Primal; dialogue. Granted, it’s in unsubtitled Arabic and still made heavily visual, but still. Hell, we even get her name – Mira – that Spear says by the end of the episode.

You know, even though we’ve gotten full-on magic already, this feels greater. This blows open the whole world of Primal, especially as we’re getting a second season. With Mira, an escaped slave from a theocratic order that worships the moon and likely scorpions, recaptured and spirited away, I think we got a season 2 arc on our hands. That, or at least a season opener.

And you know what? After thinking this kind of story development would never come up, I’m kinda down for it (I’m still processing this as I type, though I’m cautiously optimistic on the whole). The reason why? Mira is an interesting character. She brings new skills and attributes to our duo; she can cook complex dishes and can create and use a bow and arrow for example. She’s got a rich life history. She inspires creativity in the group.

So, after a largely peaceful first half and with memories of Rage of the Ape Men popping up, I kept waiting for the shoe to drop. Surprisingly, it doesn’t. In fact, the action is light on the whole. Instead, it gives us time to connect and learn about Mira. Sure she’s captured by her people, but we don’t know if she is dead. It’s a surprisingly lighter ending for Primal, but I’m here for it (again, cautiously optimistic).

Is it my favorite episode of the back half of the season? No, that honor still goes to Coven of the Damned, but it’s up there. Is it a good season finale? For sure it is.