Hey everyone. Below are a few bite-sized mini-reviews for three films that came out recently. Here are my brief thoughts on Old, Snake Eyes, and The Last Letter From Your Lover. Please enjoy.

Plot: A vacationing family find out that the beach they’re at accelerates the aging process and must find a way to get out.

Old is the latest offering from M. Night Shyamalan. With this filmmaker, you never know what you’re going to get (kind of like a box of chocolates). This is the man who gave us The Sixth Sense, a movie I will always argue as being a perfect film. He’s given us hits like Unbreakable and Signs. However, he’s also given us abysmally reviewed films like The Last Airbender and The Happening. What M. Night do we get with Old? Well, much like a lot of his offerings, this Shyamalan story certainly has an interesting hook. And, considering I’ve enjoyed his last few films, I want another success story from this man. Sadly, that is not what we have here. Old is strange. I was talking to a friend and he mentioned something about Shyamalan that I kept thinking about. He said he likes Shyamalan because he writes his characters like an alien trying to pass for being human. Every so often there’s a line of dialogue that makes you go, “Hey man, I don’t think people talk like that.” I felt this way throughout the entirety of Old. Its’ concept is a neat and freaky premise. It’s just that the dialogue is so clunky and on-the-nose. It’s as if Shyamalan is trying to spoon-feed you the plot by making sure you don’t miss anything. It just doesn’t feel natural at all. The acting and dialogue make you feel like you are watching a movie as opposed to being immersed in another world. At certain moments, I wanted to pause the film and ask the actors, “You guys sure you don’t want to try another take of that?” As outlandish as the premise is, Shyamalan takes it seriously and wants us to be horrified by this. It’s a scary premise but the execution is a little off. These characters just don’t feel that real. 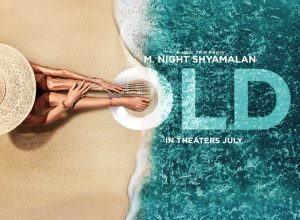 It is so strange to say that about a recent Shyamalan film because, two films ago, he made Split. Split features absolutely incredible performances from James McAvoy and Anya Taylor-Joy. McAvoy should have gotten at least some awards season buzz for that role because damn. I enjoyed Split as well as the film he made before that, 2015’s The Visit. The Visit was such a pleasant surprise. It had its’ scares and heart and a Shyamalan twist that actually worked really well. I really liked The Visit. Unfortunately, that same level of scares, heart, and memorable characters are not found in Old. Old is neither the horror picture it wants to be nor the family drama it has elements of. Characters are picked off like any horror movie but there are only two deaths that really left an impression on me. None of the deaths felt like a real loss since I didn’t feel that deep a connection to these characters. Hell, there’s a character the families meet on the beach that’s a rapper called Mid-Size Sedan (Aaron Pierre). I’m sorry Mr. Shyamalan but how am I not supposed to laugh at that name? Old is far from Shyamalan’s worst but also far from his best.I didn’t at all hate this movie but I walked away unimpressed. Sory M. Night. I love some of your movies. You will always have your first three films as well as the recent ones I mentioned before. I don’t even hate Split’s underwhelming follow-up, Glass. It’s just that these films don’t live up to the potential their premise promises. I’ll be rooting for another Shyamalan hit in the future but Old is not it.

Plot: An origin story for the G.I. Joe character Snake Eyes, the film finds our hero being invited to a secret ninja clan as ex-members and Cobra try to destroy them.

Snake Eyes (no, not the Brian De Palma movie) is an interesting bit of summer entertainment. Here is an action film with an interesting story, fearsome characters and the chance to have a hot new franchise. The only problem? It’s an action film. That’s not a problem in itself. I love me some action movies. But what do the best action movies have? Great action that you can understand, see and comprehend. Snakes Eyes has numerous action sequences but rarely did it give me a thrill. I enjoyed Snake Eyes for the story and set-up for future installments more than the action itself. Maybe I’m holding the film to a standard it never intended to cross. This is a film all about ninjas. All those swords and daggers probably leave a bloody mark right? Wrong. Snake Eyes is a Hasbro film after all and is stuck with being rated PG-13. Look I know I’m not supposed to expect The Raid or anything that graphic. But it is super strange to have a ninja film be so safe. Hell, even Ninja Assassin was rated R and the action in that was the only good part of that film. Director Robert Schwentke has done action before (2010’s Red) but I don’t think he was the right guy for this property. This needed someone who knows how to showcase action. They needed someone like Justin Lin. In my review for F9, I referred to him as “action movie Viagra” because he is. He can come in, work within the lines of PG-13 action and still produce a fun ride. Sadly, Snake Eye’s action sequences aren’t presented as well. 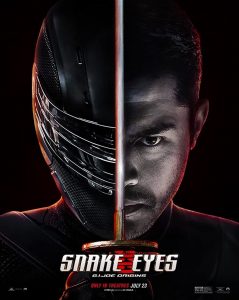 Let’s talk about what does work here. Henry Golding is an engaging lead as Snake Eyes. The man has shown he has charisma to spare thanks to Crazy Rich Asians and A Simple Favor. Andrew Koji is a stand-out as Tommy, Snake Eye’s new friend and eye into the ninja world. I am always happy to see Iko Uwais and Samara Weaving in anything. Even if they’re in bad films, they’re usually some of the best parts of them. We also have Haruka Abe and Peter Mensah showing up as other members of the ninja clan. I know you are not seeing this film for the acting. Still, the story here is taken seriously and all these actors do a decent job at selling this world to you. Script-wise, you’re probably going to see where most of this is going. It’s a very predictable plot yet, I have to admit, I was interested in these characters. I liked the intrigue of the ninja clan and the training Snake Eyes has to go through. I liked the themes of loyalty that are brought up between Snake Eyes and Tommy. I liked the way the films sequel-baits near the end because I see promise here. I want this next movie to kick ass and I think that could happen if they hire a new director. I enjoyed myself watching Snake Eyes but it’s hard not to think of how this could’ve been improved upon. Somewhere there’s a Snake Eyes film that is proper fun. I’m looking forward to seeing that film. This might not be it but I still had an alright time.

The Last Letter From Your Lover

Plot: In modern times, a writer finds a letter detailing a secret affair back in the 1960s. Unlocking a mystery from the past, she searches for more letters and the answer to where they came from. The film also shows us the past romance that started it all.

Augustine Frizzell is a name I’ve remembered for a couple years now. See, she directed an A24 film called Never Goin’ Back. You may not have heard of it but I love it. Never Goin’ Back is half coming-of-age slice-of-life and half gross-out stoner comedy. It’s a blast. Ever since then I’ve awaited her follow-up. I did not know she would be teaming up with an actress that I absolutely love. I have seen Felicity Jones in five other films before this and I liked them all. I’d say your film has a 40% greater chance of me seeing it if it has Felicity Jones in it. Plus, you’ve got Shailene Woodley who I’ve loved in The Descendants and The Spectacular Now. This is a recipe for a quality film right? For the most part, yes. Based on the novel by Jojo Moyes,  The Last Letter From Your Lover is a comfort film. This is by no means going to reinvent the romance genre. In fact, it’s fairly predictable at points. Yet it won me over. It’s a nice film. It’s like a mug of hot coco. I doubt this will end up on anybody’s year-end lists but it does go down sweet. 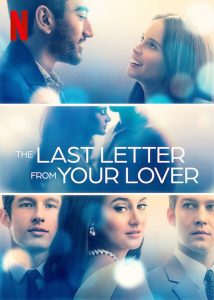 What do you need in any romance film? You need your viewer to care about the romance at hand. You need to care about the relationship. I have seen a number of romantic films where I really felt something for the couple at hand. Think Silver Linings Playbook or Carol or Disobedience. However, it’s always unfortunate when you see a romance story where you could care less if anybody got together (I’m looking at you, Winter’s Tale). Here, we have two possible love stories for the price of one and both held my interest. Sure, the 1960s storyline with Shailene Woodley and Callum Turner has the more dramatic plot. But I also thought the modern-day mystery with Felicity Jones and Nabhaan Rizwan was enjoyable mostly because I liked these actors playing off each other. Like I said, this is a fairly predictable film. Yet, even if you know the destination, the journey getting there can still be fun. By the end, I had to admit: Frizzell, Moyes and Netflix had told a pretty decent story. I did genuinely like this film. You don’t need to get a Netflix subscription just to watch this. But if you already have Netflix and want some love in your life, I’d say this does the job well.