I made a list back in January all about the 21 movies I’m most excited to see in 2021. Little Fish was on that list. Why is that? Well I was interested in the intriguing story, yes, but mostly I was excited because of Jack O’Connell and Olivia Cooke. These are two actors that I just love. I’ve been slipping on my O’Connell films since I haven’t seen his more recent work. But I’ve become a big fan of his from British dramas like ’71 (2014) and Starred Up (2013). Starred Up is a film that especially captivated me. I believe when I first saw it, I said, “If it were any grittier, it would be the cinematic equivalent of sandpaper.” Or, in other words, it is not an easy watch but so worthwhile. In that film, it is O’Connell unleashed. As 19-year-old prison inmate Eric Love, he is an animalistic force to be reckoned with. Ever since Starred Up, I’ve kept my eye on this actor.

Now let’s talk Olivia Cooke. Here is an actress still fairly new to the game. Yet, she has already worked on some exceptional films. I first saw Cooke in the 2015 indie drama Me and Earl and the Dying Girl. Not that long after that, I went to see the 2017 dark comedy/thriller/I-really-don’t-even-know-what-genre-it-is Thoroughbreds. In these two films she is playing two completely different characters. In Thoroughbreds, she is portraying a girl without any emotions. In Dying Girl, she plays the titular role feeling all the emotions. She nails both. The one-two punch of these films made me take notice. I walked away from each film going, “Okay who is this Olivia Cooke?” I’ve been a big fan ever since.

Now they’re in a film together? Really? One ticket for Little Fish please (well virtual ticket because, you know, pandemic.) In Little Fish, Cooke plays Emma, a Brit living in Seattle and working as a veterinarian. O’Connell is Jude, a photographer and former addict who has been sober for five years now. Together they are a happily married couple. It would be all well and good except for all that NIA taking over the world. NIA stands for neuro-inflammatory affliction and it’s a virus that drastically affects your memory. One day you could going through your normal routine and then you will forget how to drive….or what apartment building you live in…or who you live with. For some, it can hit all at once. For others, it’s a slow fade away. We don’t know where it came from or how one contracts it. Government officials are working on a possible cure for it but, even if they find one, there won’t be enough to go around for everyone. All Emma and Jude can do is try and survive. It’s a story about a global event told through the eyes of an aching romance.

It’s a bleak world Emma and Jude live in. Imagine living through this time and not knowing who will get NIA next…or maybe we don’t have to imagine. The fact that this film is being released during an actual pandemic is completely coincidental. The film’s production began way back in 2019. It was to be screened at the Tribecca Film Festival in 2020 but, well, the world had different plans. The film I feel would have worked even if things were normal. Yet things are not normal and that gives Little Fish a haunting sense of familiarity. It’s watching your loved ones become affected by a virus. It’s waiting for whatever cure there could possibly be. It’s adjusting your life to a new normal. The score by Keegan DeWitt really elevates the emotion you may feel as well. There are many moments of DeWitt’s score and Cooke’s voice-over going hand-in-hand. I actually watched all of the end credits just to hear more of DeWitt’s music.

But was I right to be excited? How were O’Connell and Cooke? I have to say it’s another victory for both of them. I find it interesting that Cooke was last seen in the brilliant Amazon film, Sound of Metal (one of my favorite films from 2020.) There, her co-star was going through a loss of hearing. Here, it’s a loss of memory. However, in both films, she is not just the typical girlfriend/wife character. She’s an active part of the story (Hell, in Little Fish, we meet her first.) Cooke and O’Connell go together just as well as Riz Amend and Cooke in Sound of Metal. I’m not saying that this is as good as Sound of Metal but I was still really affected by this film. I’d also like to acknowledge French artist Soko and actor Raul Castillo who play another couple Emma and Jude are close with. It’s wild seeing Castillo in this role as it is very different from the role I most associate him with (L.A.’s Mexican Batman in the Joe Carnahan-written El Chicano. I don’t know how good that movie is artistically but I dig the hell out of it).

A romantic drama will live or die by how much you feel or care for the relationship in the film. For me, the relationship and the world around it felt real. I believed that these characters were in love and I wanted them to have a happy ending. The film’s tone is romantic but also desolate. It could have drifted into melodramatic territory yet I don’t feel like it did. In fact, I was pretty riveted for the 100 minutes the it was on for. This is because Cooke and O’Connell bring a lot of feeling to these parts. There are certain scenes they share that really got me in the heart and I felt all the love and pain that the film threw at me. I called the romance here aching for a reason. It’s a tribute to the ones we love the most. Even through dire circumstances, it’s about those we hold onto. Director Chad Hartigan and screenwriter Mattson Tomlinhas have crafted a strong vision here. You don’t need me to tell you that times are tough right now so this may not be the happiest film to watch currently. But you know what? Because of that, it might also be the perfect film to watch currently. 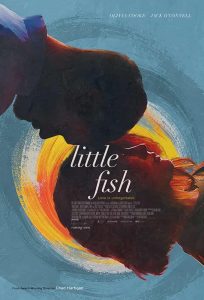