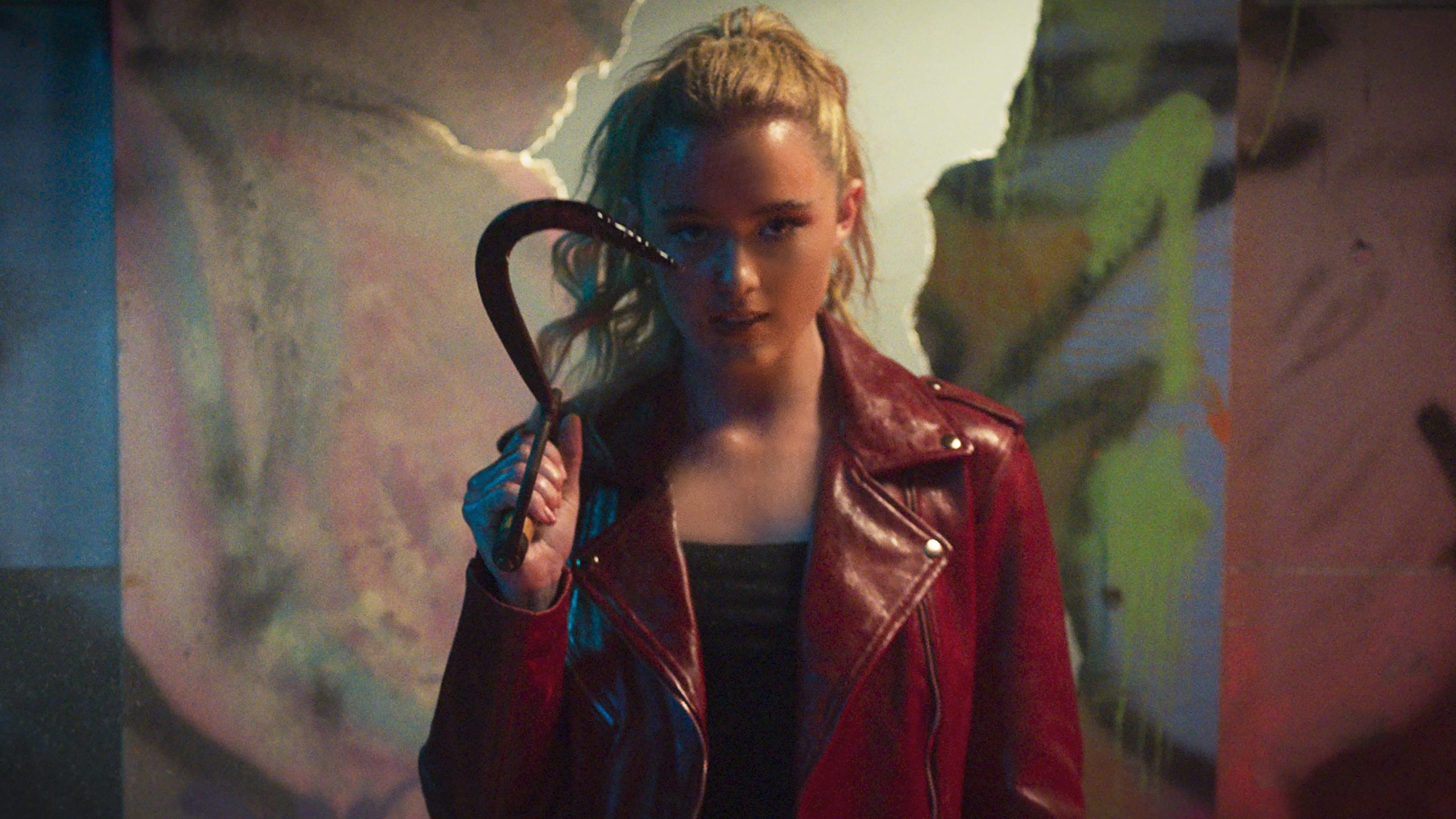 Freaky is the new horror-comedy from director Christopher Landon. Landon has cut out himself a nice little niche of these kinds of movies. Most notably, he has directed the two Happy Death Day films as well as Scout’s Guide to the Zombie Apocalypse. I haven’t seen Scout’s Guide but maybe I should change that considering how I feel about his other movies. Happy Death Day was one of my big surprises of 2017. I just recently rewatched it and it’s sequel, Happy Death Day 2U. These two are genuinely fun comedic takes on the slasher horror genre. And Landon continues his track record with Freaky.

Freaky stars Kathryn Newton as Millie, a high school student who really only hangs out with her two friends Josh (Misha Osherovich) and Nyla (Celeste O’Connor). None of the guys look at her and the popular girls condescend her. Even her woodshop teacher (Alan Ruck) doesn’t like her. She lives in the town of Blissfield, which seems to have a serial killer on the loose suitably called the Blissfield Butcher. Vince Vaughn plays the Butcher here and, I got to say, he pulls off playing a scary killer. This is like when Kevin James played a murderous Nazi in another film from earlier this year, Becky (very much recommended by the way). These men mostly known for comedies show that they can seem threatening very well. Where’s the petition to get Adam Sandler one of these roles?

Millie, sadly, crosses paths with the butcher early on in the film. But the strange thing is that she doesn’t die. No, she just swaps bodies with the killer. Now Millie is in the Butcher’s body and the Butcher is in Millie’s body. Millie must now convince her friends that she isn’t the killer and try to get her back into her regular body. This also means the Butcher can roam free amongst the town and high school dispatching anyone he wants.

Freaky is yet another example of Landon taking the slasher genre and crossing it with another comedy. In Happy Death Day, it was Groundhog’s Day. Here it’s Freaky Friday. Call it by Freaky Friday the 13th (the film was actually released in theaters this past November on Friday the 13th). Happy Death Day was fun and had a winning lead performance from star Jessica Rothe. Landon has done it again with Freaky. Both Vaughn and Newton play their characters very convincingly. Vaughn playing a teenage girl is as silly and funny as it sounds. Meanwhile Newton, as the psychotic killer, has that whole creepy silent killer thing down.

Here’s where I confess something: I’m not a big fan of slashers. I like Scream (particularly Scream 2) and I actually dig the recent 2018 slasher, Hell Fest. But mostly, I’m not a fan. If your slasher doesn’t have creative kills (ala Final Destination) or a kickass character fighting back (ala You’re Next), then count me out. Thankfully, Freaky has both. The kills here are memorably creative and over-the-top. Where as Happy Death Day was PG-13, this fully goes for the R rating. The opening scene in particular is particularly visceral. It’s the kind of movie where the kills (like the aforementioned Becky) will make you audibly yell out.

Yet how is the comedy in this horror-comedy? It’s pretty funny actually. Despite being a slasher, the film is fun throughout most of its runtime. And like I said, Vaughn really commits to this role. He’s playing a teenage girl who has little confidence besides with her friends. To see Vaughn play Millie as she becomes more self-assured is endearing. Plus, Osherovich and O’Connor as Josh and Nyla deliver a lot of the film’s laughs (Josh in particular has some memorable lines).

Much like Happy Death Day, I wasn’t really convinced to see this when watching the trailer. However, the positive word-of-mouth got me interested and I’m glad it did. I’ve seen Newton and Vaughn in many roles before this and both effectively play different parts than what came before. Is there anything here that didn’t work? Sure but nothing to take away from the experience. For one, I find it absolutely hilarious that Kathryn Newton is supposed to be playing this social outcast that no boys would want. It reminds me of Easy A and that universe that somehow thinks Emma Stone is homely. And I will say a particular death involving a chainsaw could have gone further. I’m sure there were jokes that didn’t work but I can’t remember them right now. All in all, if you’re a horror fan who liked Happy Death Day, I’m pretty sure you’ll enjoy Freaky. Hell, if you’re into movie marathons like I am, I recommend watching both Happy Death Day movies and then this. Call it a Landon-athon. That’ll put a smile on your face.

Lifelong Chicagoan and film school graduate. Been passionate about film since I was a wee kid so writing about it feels like home.