F9: The Fast Saga is the ninth film in the main Fast and Furious storyline. Technically it’s the tenth film with the name Fast and Furious since 2019 had the spin-off Hobbs and Shaw. That is a lot of tank tops and gear sifts. And before we get into where I fall on this series, let’s quickly lay out the plot (yes there actually is a plot). It’s been four years since we last saw them but the family is back. As always, there’s the patriarch, Dominic Toretto (Vin Diesel). We also see the return of Dom’s other half, Letty (Michelle Rodriguez). There’s the two bickering knuckleheads Roman Pearce (Tyrese Gibson) and Tej Parker (Chris “Ludacris” Bridges). Jordana Brewster returns as Dom’s sister, Mia. And rounding out the family is British hacker, Ramsey (Nathalie Emmanuel). F9 introduces a new villain to the mix: Dom’s younger brother, Jakob (played by none other than John Cena). Jakob is after a weapon known as Project Aries. Once in possession of Project Aries, Jakob will be able to take control of every weapon system in the world (why anybody would invent something so dangerous is never explained). Plus, Jakob’s got a whole private army backing him up. As you can imagine, it’s up to our gang to stop him. Rev your engines now. 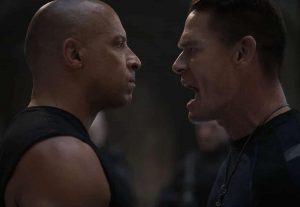 Now I tried to keep the plot description pretty light here. The storylines in these films are there but they’re not the main focus. The focus is instead on the action and camaraderie of its characters. F&F is like any successful action franchise. Think James Bond or Mission: Impossible or Die Hard. A nice story is an added bonus but that’s not why you pay full price to see it on opening night. You pay for the action and boy has F&F got it. Personally, I am a big fan of these films. I’ve seen every one except the third film, 2006’s The Fast and The Furious: Tokyo Drift. I’ve always heard that that one is the weakest entry but even Tokyo Drift now has a cult fan base. It was also the first film in the franchise to be directed by Justin Lin. Lin has directed films three, four, five, six and now nine. Lin also directed the third film in the recent Star Trek  series, Star Trek Beyond. I mention that because let me tell you something: if you are a producer and you want to give your action franchise a shot of adrenaline, hire Justin Lin. The man is action movie Viagra. His F&F films kicked off what I see as the golden age of this series.The fourth, fifth, sixth and seventh films are definitely the high points of the series. Hell, Furious Seven (directed by another great director, James Wan) might be my favorite. Sadly, the next film after that was 2017’s The Fate of the Furious. This is definitely my least favorite film in the franchise. It takes itself way too seriously and, up until the climax, is frankly kind of boring. It put a wet towel over the flame that was the F&F franchise.

Now we have F9: The Fast Saga. Justin Lin returns as director and you know what? I’ll start off by saying this: Welcome back, Mr. Lin. Welcome back. The F&F films during that aforementioned golden age straddled the line of so-dumb-but-so-fun entertainment very well. This film straddles that line even more than usual. F9 can get so so dumb but oh man is it so so fun. At one point, Tej literally says the words, “if we obey the laws of physics…” as if the series hasn’t already obliterated those laws in this and the previous films. Early on in the film, Letty is ejected from her motorcycle and lands onto Dom’s car hood and doesn’t have a scratch on her. This is not the first time this series has done that. These films have gotten so insane that Roman starts to seriously question if they are invincible. I secretly hoped that the answer was yes but maybe they’ll explore that in the next film. There are a few meta moments like that that signal to the audience, “we’re in on the joke too.” And yet, they still lean in on how (no pun intended) ludicrous the action gets. The first big set piece is a chase through a landmine field and it has got to be divine intervention how the team escapes that one. Another chase is Dom and Jakob in Edinburgh hopping from passing vehicle to passing vehicle. I’m not even going to mention the climax. I’ll just say, “wow. They really went there.”

This may sound like I’m complaining but I’m not. This is what I came here for. I came for set pieces that are absurd with characters I’ve grown to care for. Hell, this may be the most absurd entry yet. There were times I giggled with sheer wonderment at what was happening on screen (so many cars are destroyed in this film). In short, F9 gets the series back on track. I may need some time to figure out where this one ranks in the franchise but I’m thinking it’s at least as fun as Fast and Furious 6. One aspect I do genuinely not like about the film is Cipher (the villain from the eighth film they bring back for this one). Charlize Theron is, of course, incredible at her job. I love that she has gotten badass action roles like Mad Max: Fury Road and Atomic Blonde. However, she is wasted in this character of Cipher. Cipher is one of the weaker villains in the franchise and it doesn’t give an actor of Theron’s caliber enough to do. I’m not intimated by this villain and Theron is frankly too good for this role.

So what have we learned boys and girls? Well I’ve learned that, with enough skill, balls and charm, a film can crank up the stupid and still be a good time. It may not be my favorite F&F film but I still thought it kicked ass. If you’ve never been a fan of this franchise, this is not going to change your mind. Yet, these films are summer popcorn entertainment writ large. It’s the kind of film you see with your best friends and laugh about after the film. You will bring up how preposterous things get but you will say it with love. F9 wastes no time in strapping your helmet on and going for a ride. It entertained me for its entire 145 minute running time. Lin is attached to direct the next entry in the franchise and I eagerly await what they can give us next. It’s been a rough fifteen months y’all. Why not distract yourself with big cars and bigger muscles? After all, it’s all about family.