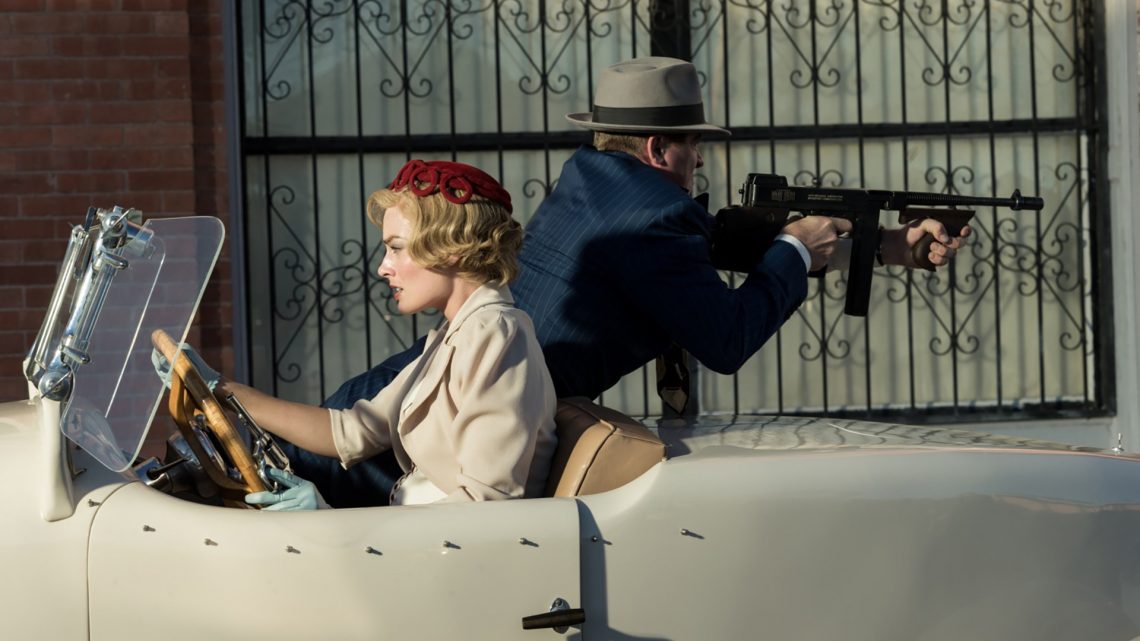 You know, the train ride from Chicago to Flint takes a long time. Five hours in fact. Safe to say, I needed something to do other than watching the Midwestern countryside zip by. Side note: while I am admittedly traveling for a small Thanksgiving dinner with my immediate family in Alpena MI, I plan on staying there socially distanced for the rest of 2020 after getting tested, so I’m trying to be safe about it. But, back to my train ride. Seeing as I was bored and the edible was kicking in, I decided why not watch period thriller Dreamland for a good ol’ Watercooler Review.

For once, I decided to go in totally blind with Dreamland; normally I read a logline or watch a trailer at minimum beforehand. So when I saw that Dreamland starred Margot Robbie as a Depression-era bank robber, I was intrigued. Earlier this year I had read Jeff Guin’s book on Bonnie and Clyde – if you’re interested, the book is called Go Down Together, it’s a fantastic read – and since then I’ve rewatched the classic 1967 movie and the similar crime masterpiece Badlands. All that to say the prospect of Margot Robbie playing the Bonnie character intrigued me.

So what did I think of Dreamland? It wasn’t a bad movie. It just wasn’t the movie I was expecting and it left me wanting.

Let me paint you a picture. It’s 1935 in the town of Bismark Texas. The Dust Bowl is in full swing, and the farming community is struggling. 17-year-old Eugene Evans (Finn Cole) is flirting with the criminal lifestyle, dabbling in petty theft while idolizing the romanticized portraits of bank robbers in the true-crime magazines. All of a sudden, the infamous outlaw Allison Wells (Margot Robbie) is spotted in the area after a blood-filled bank robbery. Later that night, Eugene finds Allison in his family barn, trying to tend to a bullet wound.

From there, where do you imagine the story goes? Personally, I thought the impressionable teen would help Allison, attracted by her beauty (she is Margot Robbie after all) and her criminal lifestyle. Once they find out they both want to go to Mexico – Eugene has a dream about finding his lost father who he believes is living on the Mexican Gulf Coast while Allison wants to escape the authorities – they’d go on a road trip filled with bank robberies, stick-up jobs, and problematic romance. Like young kid Barrow gang member W.D. Jones, Eugene would learn he isn’t into the criminal lifestyle and eventually split after a job gone horrendously wrong. You know, something exciting.

What did we get instead? That same kind of character arc just told much more slowly and without much of the excitement. Allison is stuck in a barn and on the Evans homestead for 60% percent of the movie. Most of the thriller aspects were of Eugene trying to sneak around his strict sheriff stepfather George Evans (Travis Fimmel) and his inquisitive younger sister Phoebe (Darby Camp). They only get into one robbery in the last 10ish minutes at which point Eugene realizes the outlaw life isn’t for him and that his dreams to find his birth father is pointless. Plus a problematic romance did emerge; at first, Allison is clearly manipulating Eugene but by the end, she’s fallen for the kid enough to save his life so he could resume his old one.

So my original prediction was correct, it just felt like the movie we got was all preamble to the movie in my head.

The big highlight for me was the cinematography (Lyle Vincent). In particular, the use of shifting aspect ratios and color grade to highlight the difference between reality and dream. Reality was shot in an aspect ratio that evokes new cinema (I admit, I’m not great when it comes to determining a specific ratio on sight alone). Dreams, on the other hand, were shot to look like home movies on super 8. It was an interesting mix, especially once how Eugene’s dreams take on nightmarish tones after his first bank robbery.

Otherwise, the movie was largely fine. The period was recreated. Margot’s acting was unsurprisingly the highlight on the acting front. Honestly, a big part of my disappointment in the movie is that she doesn’t get more to do. Fimmel also deserves an acting shout-out, as he was definitely channeling the same sort of energy he had in Raised by Wolves S1, which in this case works well. The directing (Miles Joris-Peyraffite) was fine, nothing groundbreaking or extraordinary. The shot-blocking and editing were fine. The framing narration was there. It created the feeling of plenty of other movies I’ve seen set in the Depression-era south.

So to put everything together, Dreamland is a largely unremarkable-looking movie with some splashes of inventive cinematography and good acting that’s more about a slow coming-of-age story instead of a coming-of-age heist saga. I wouldn’t not recommend it, just know you aren’t getting an exciting flick akin to Bonnie & Clyde despite what you’d think based on the premise.