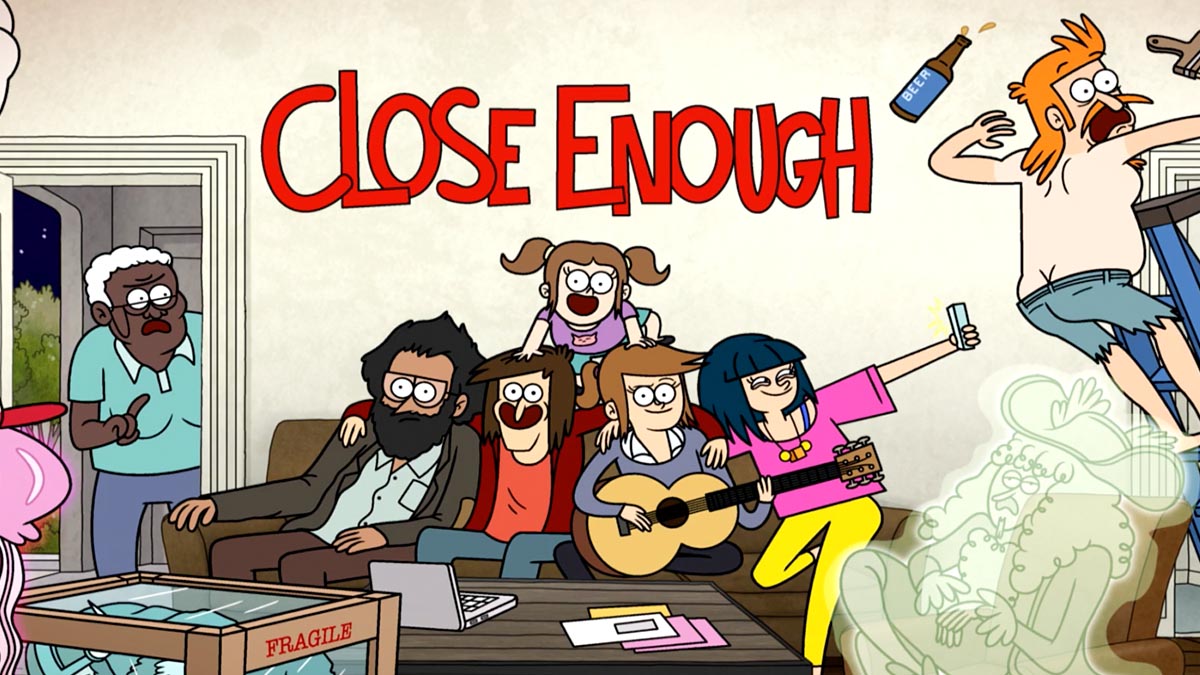 Back in January, I checked out HBO Max once I was finally able to download the app on my Roku and after my older sister and brother-in-law gave me their login credentials – thank you Rachel and John by the way. Once I was online, I ended up watching two Max originals in quick succession; The Flight Attendant S1 and Close Enough S1. While I really liked watching Kaley Cuoco drunkenly solve and stumble her way through a globe-spanning murder conspiracy, Close Enough was my favorite of the two.

For those who don’t know, Close Enough is the latest animation project of J.G. Quintel, the creator of the acclaimed Cartoon Network show Regular Show. Like Regular Show, it’s a comedic show based around mundane and relatable adventures that become incredibly surreal; in Close Enough, the stories deal with the challenges of parenthood and growing older. Think Man Seeking Woman if it were animated and followed a cast primarily in their 30’s instead of their 20’s with a sprinkle of Bob’s Burgers wholesomeness and Regular Show’s animation style.

Safe to say, I was pleasantly surprised when I heard season 2 was coming out less than 2 months after watching the first season. After watching season 2, I can’t help but think it’s both better and worse than season 1. Yeah, I get that sounds confusing, here’s why.

In essence, this confusion stems from the focus on the ancillary cast in season 2. In season 1, the focus is based around the family unit of Josh Singleton (J.G. Quintel), his wife Emily Ramirez (Gabrielle Walsh), and their 5-year-old daughter Candice (Jessica DiCicco). In season 2, this scope broadens out to include the whole of the main cast. Between 16 segments across 8 episodes, every one of the main cast gets at least one segment where they are the star and focus.

On the positive side of things, this is a great way to flesh out the world of Close Enough, opening up new avenues of stories to tell. Normally I wouldn’t complain about this, but Close Enough S2 has 7 main characters and only 16 segments. This means that while we get a greater focus on the whole cast, the family unit we followed in season 1 are more in the background. So in practice, this means if someone gets a segment that isn’t great, they likely don’t get another one. That, and some of the characters who are given segments (sometimes more than one) just aren’t as interesting as the rest of the cast (looking at handyman Randy and Candice’s teacher Mr. Campbell).

All that said, all of the highpoints of the first season were present in the second. If there’s one thing that endeared the show to me was both how relatable it was and how wholesome it is. While the show revels in surreal humor, it’s all based on highly relatable situations. Josh’s first segment, where he gets hooked on bodybuilding, is based around him getting too old to play games with Candice involving carrying her. In her first segment Bridgette, Emily’s best friend and one of her roommates, gets into a relationship with a ghost after she’s been ghosted by her latest and best romantic prospect in a while. Pearl, the duplex landlord and retired LAPD officer, accidentally joins an old-lady bank-robbing crew when she goes to the WYMCA because her insurance won’t cover hip treatments. More than that though, these aren’t perfect people. They have dreams of success (Josh wants to be a videogame designer and while Emily wants to be a famous musical comedian for example) that are at odds with the reality of student loans and juggling parenthood with full-time jobs. Everyone makes a ton of mistakes, even if the idea behind them was well-meaning. But in the end, everyone tries their best to help and/or understand each other.

If anything, the increased scope of the stories heightens this relatability. On top of that, the sheer wholesomeness is still present. Stories about the primary three often deal with their love for each other. As I mentioned earlier, Josh gets super into bodybuilding so he could carry Candice around. When Josh and Emily throw a concurrent party for the parents during Candice’s birthday party, the day is saved when they sus out from the birthday wizard holding the children captive in Birthday Land that all Candice wants is to spend her birthday with her parents (it makes sense in context). Honestly, I have a hard time thinking of a more wholesome animated show besides Bob’s Burgers.

So in the end, if you like animated shows about tight-knit family units with relatable issues and a dose of surrealism, Close Enough is a great show. If you’re already a fan, season 2 is a solid follow-up. It keeps and expands on everything that makes season 1 good. Now all that’s left is to wait for season 3 and hope they keep the scope but increase the episode count to offset segments that just aren’t as interesting.