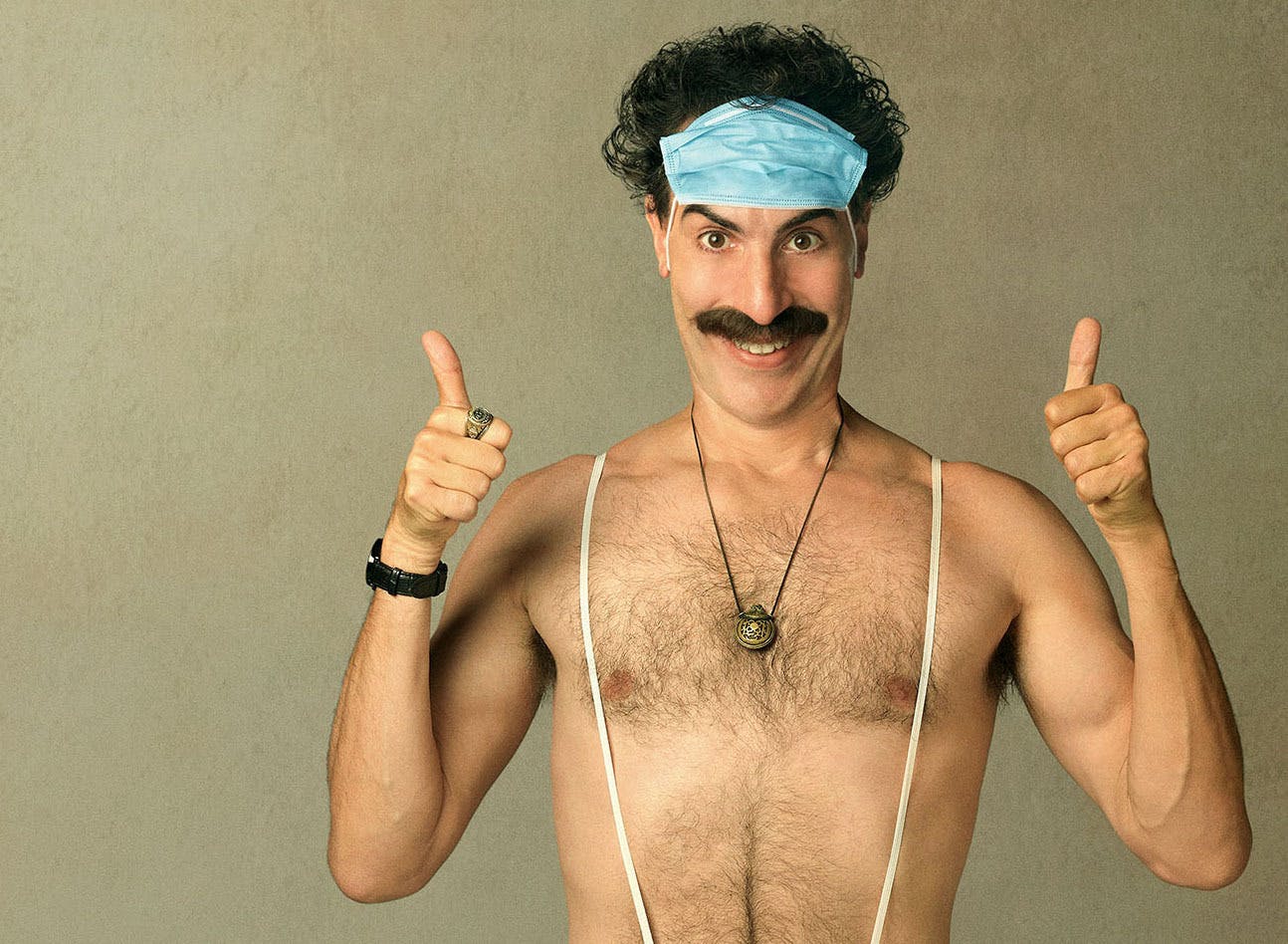 I’m not gonna lie. When it was announced back in September that there was going to be a sequel to Borat, I was highly skeptical. Based on the trend of sequels to mid-2000s comedies being at best flaccid retreads, I wasn’t expecting a whole lot from Borat Subsequent Moviefilm. If anything, I expected an unnecessary and misguided retread trying to recreate the magic of Borat and Da Ali G Show.

Fast forward to a few days ago. Word is spreading about how Borat Subsequent Moviefilm caught none other than Rudy Guiliani, personal attorney to the president/malfunctioning reptilian ghoul, acting like a massive creep on camera. The more I read about it the more I became intrigued about the movie. One thing that made the original Borat so good was how it managed to mercilessly skewer those who allowed themselves to indulge their worst impulses at the behest of an outlandish caricature. So the fact that Borat Subsequent Moviefilm was able to embarrass one of the (sadly) most influential men in the U.S. so thoroughly made me rethink my attitudes going in.

Fast forward to Friday afternoon. Free from work and feeling the effects of my 1:1 CBD-THC vape, I took the plunge and watched the movie.

My initial reactions were one of three things. I was either laughing hysterically at the antics Borat and his 15-year-old daughter Tutar found themselves in, yelling “Jesus Christ” to no one in particular about the nightmarish insanity Cohen prods out of people, or both. Which, in itself, is a victory. It’s the Borat we all know and love.

But here’s the thing. While Borat Subsequent Moviefilm may not be expressly necessary, but goddamn does it justify its existence by brutally satirizing this crazy-ass political culture we find ourselves mired in. It may be the best cinematic snap-shot of the insane world of 2020 we’ve gotten and will get in fact. The Guiliani scene may be the satirical and emotional apex of the movie, but he’s not the only one in the crosshairs. If anything, Borat Subsequent Moviefilm is Sacha Baron Cohen’s ruthless take-down of the Trump administration and the personality Qult around him.

From the very beginning, Cohen ties his nightmarishly-backward Kazakhstan to Trump by just how much they love him. The craziest bit is it isn’t all that much of a stretch compared to what we say in Borat. All Cohen had to do was point out how this former Soviet state with a penchant for anti-semitism and institutional misogyny aligned incredibly well to the attitudes of Trump aka a wannabe post-Soviet flavored oligarch. It’s quite surreal how well it worked.

Once Borat arrives in Galveston to carry out his government-mandated mission the surreality continues to grow. While his initial mission – to try and win the Trump administration’s favor for Kazakhstan by bringing the Kazakh Minister of Culture and top pornstar Johnny the Monkey (an actual chimp mind you) as a gift – fails when Tutar eats Johnny during transit, the pair make a go of the mission with Tutar as the gift for “notorious ladies man” Mike Pence. With the election ratcheting up and the COVID-19 pandemic sweeping the nation, the pair get into situations that highlight just how insane the culture of the far-right has gotten.

Don’t believe me? Just watch the song he performs for the “March for Our Rights Rally”. The fact he can get this crowd of Qultists and neo-confederates chanting the choruses “inject them with the Wuhan Flu” and “chop them up like the Saudis do” with gusto is simultaneously an act of masterful trolling and bone-chilling horror. And we have yet to get to Guiliani, plus there’s crashing CPAC, quarantining with some peak Qultists, and all sorts of other revealing side adventures. And again, this is happening while the COVID-19 pandemic is beginning its rampage around the world. It’s a look into an alternate reality that is anything but, and it’s soul crushing.

If there’s anything that keeps this from getting too dark are the moments of genuine humanity Cohen manages to find or add. Scenes like Tutar finding independence and a sense of self after talking with her babysitter or pair of Jewish women (one of whom is a Holocaust survivor) sharing some kind words and soup with a suicidal Borat. Side note, while the Jewish women were in on the joke, the babysitter wasn’t, which makes her comforting and supporting Tutar all the more heartwarming.

Speaking of Tutar, Borat Subsequent Moviefilm would not nearly be as good if it weren’t for Tutar, played by newcomer Maria Bakalova. She really is the perfect partner in crime for Cohen. The way these two can effortlessly bounce off each other while playing the people they’re skewering for suckers is awe-inspiring. It feels like one generation passing on the torch to the next, both in-character and in real life. Plus, watching the development of their relationship, while fucked up from beginning to end, is more satisfying to me than Borat’s arc in Borat. Also, it helps that Tutar’s arc is both loaded with humor and a surprising amount of emotion.

All that said, Borat Subsequent Moviefilm is by no means perfect. After this first watch (I’m betting there will be more), I have two big issues, both on the writing side. The first is the story. While it’s more satisfying than Borat’s search for love in Borat, it is structurally the same. I bet if you were to watch the two movies back-to-back, you’d find the story beats come at the same time. So, you know, points off there. The second is the ending. Once Borat and Tutar return to Kazakhstan, the final twist loses me. I won’t spoil the details, but it strikes me as clumsily done and in poor taste. Maybe I’m missing something or I just don’t get it and I need to watch it again to understand. Who knows. Either way that twist knocked the movie down a peg for me.

In the end though, even with those flaws, Borat Subsequent Moviefilm is a surprisingly good sequel to a comedy classic, the cinematic snapshot of a 2020 held hostage by the far-right that we didn’t know we needed until we saw it for ourselves.