Watercooler Reviews | Army of the Dead

Let me take you back to a time that was many moons ago. It’s 2004. The grandaddy of all zombie movies is George A. Romero’s 1978 classic Dawn of thew Dead. To what I assume was the dismay of many fans, Hollywood decided to remake it. They got a hot new director named Zack Snyder to direct his first film. Ok so a first-time director trying to remake the greatest zombie movie ever made and not do a disservice to it? Good luck, Zack. But would you believe that something incredible happened? Upon release, the 2004 Dawn of the Dead kicked major butt. This is a remake of a classic that could also be described as a new classic in and of itself. There have been so many horror movie remakes in the past twenty years. Zack Snyder’s Dawn of the Dead is by far one of the best (it’s this, 2002’s The Ring, and 2011’s Fright Night in my humble opinion). Surprisingly though, I am not overly familiar with the rest of Snyder’s other films. I never saw Watchmen or 300. The only other film of his I had seen was the Superman film Man of Steel. And this where my affection for Snyder ended.

Man of Steel is a film that I remember thinking was cool when I saw it in theaters but, over time, have grown to really dislike. Look, I’m not a Superman expert by any stretch of the imagination. Yet even I can realize that there’s a difference between a bold new take and simply not understanding the character. The Man of Steel sequel, Batman V Superman: Dawn of Justice, sounded like more of the same. The thing is is that that universe has been Snyder’s world for the past several years. Army of the Dead is his first directorial outing in almost a decade that isn’t in the superhero genre. Plus, Army of the Dead is his return to the zombie sub-genre. Would he be able to pull off magic a second time all these years later? Well, to put it simply…

Damn it, Zack! You have delighted me once again! 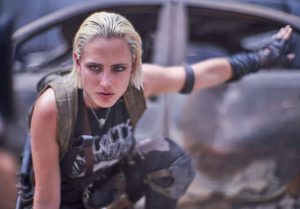 I’m not saying this is a new classic like his Dawn of the Dead remake. I am however saying that this film is a big enjoyable bundle of undead entertainment. Dave Bautista plays Scott Ward, a mercenary working in Las Vegas after a zombie outbreak takes place. Vegas has been blocked off from the rest of country and the zombies rule the ruins of the city. Scott has mercenary friends he works with like Omari Hardwick’s Vanderohe and Ana de la Reguera’s Maria Cruz. As you can imagine, this team kills a lot of zombies. But once Vegas is quarantined, their job is done and they don’t have much to go back to. Ward personally is estranged from his daughter, Kate (Ella Purnell),  who volunteers in the refuge camp outside Vegas. As the team fades away to civilian life, a casino owner by the name of Bly Tanaka (Hiroyuki Sanada) comes into the picture.

Mr. Tanaka has a crazy plan and he needs Ward for it. In the basement of his casino, there is $200 million dollars. The insurance company has already reimbursed Tanaka the money. Plus, the government plans to nuke what’s left of Vegas in the next coming days. No one is going to come for that money. Well…not yet that is. If Ward assembles a team and gets the money out, $50 million dollars of it is his. So not only is this a zombie flick but also a heist film. That’s good news for me because I personally love both those genres. Ward assembles his team including Vanderohe and Cruz. Other additions are German safe-cracker Dieter (Matthias Schweighöfer) and viral zombie-killer Mikey Guzman (Raúl Castillo). There’s also Tanaka’s head of security, Martin (Garret Dillahunt), helicopter pilot Marianne Peters (Tig Notaro), and Lilly (Nora Arnezeder), a zombie expert nicknamed The Coyote. 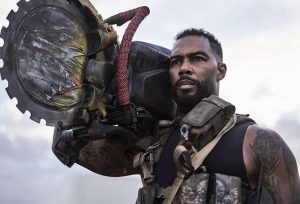 Like I said, I love a good zombie film and I love a good heist. Plus you got Dave Bautista as the lead. I never watched him as a wrestler but I’ve grown to really love him as an actor (if you need proof of why, please watch Guardians of the Galaxy and Blade Runner 2049). Here, his character is not the typical action badass. I mean, yes, pretty much every bullet he fires is a headshot. And, yes, he looks like Dave Bautista. But underneath that exterior is a man who does have a soul. Ward has made mistakes in his life but he himself is not a mistake. And, after everything he did, he’s stuck flipping burgers. This payday is the chance to make something more of himself (maybe open a food truck). Most of the characters feel the same way. This is the opportunity to do one last hurrah and get the reward they always deserved.

There are points where the film is silly but there are also points where the film is smart. The opening credits are a surprisingly effective way to get us into this world. The film’s long enough as it is. The opening credits give us what we need to know all within a tight six minutes. For a film with so many characters, I actually pretty much liked all of them. Dieter is a nice comic relief character and his relationship with Vanderohe is charming. Arnezeder as The Coyote was mysterious and intriguing. Bautista and Purnell are a tough father/daughter pairing. At first, these are characters that you might think are just cannon-fodder for the zombies. It’s when they actually go into Vegas where I found myself really caring if they made it out or not. These actors have enough charisma to make their characters distinctive. It’s a team-up film and I actually did like being with this team.

This film was first released in theaters but is now currently playing on Netflix as well. I’ve seen the film twice now (once in theaters and once on Netflix). You may think watching it a second time so soon after the first would drag (after all the film is 148 minutes). I’ve even seen people who like this film say it may be too long. I actually never felt the runtime. I was always entertained by the characters, story, and action. In fact, I’ll probably be the only person to say this: Mr. Snyder, if you want to release an extended cut like you did with your version of Justice League, I would definitely watch. The film is not one that Netflix gave the cheap end of the stick to. It looks great. The production design and effects really make Vegas seem deserted and desolate. It looks like Netflix spent some cash on this to give it an epic feel. That’s why, if you’re okay and safe to do so (i.e. vaccinated), I’d say enjoy this at a theater.

Both times I came out feeling pretty positive about the film. It’s not perfect. Far from it actually. Certain decisions made me scratch my head. Why does the ending cut off when it does? Why do we see Vanderohe operate his signature weapon only once during the credits? Why do prisoners of the zombies not try to escape? They’re not chained up or anything. Guys, just make a break for it! I have a couple more questions but, you know, no spoilers. I don’t want to ruin the fun of this movie. I had a really good time watching and rewatching this. There are certain films that go to streaming that make you say, “yeah streaming is where you belong” (See Netflix’s recent Amy Adams thriller The Woman in the Window). This is one that feels like it belongs on the big screen. It’s a big and bold vision of a genre he started out with. Mr. Snyder, welcome back.