So two days ago, I decided to watch something with some dramatic heft and intensity. Since I watched The Flight Attendant S1 a few weeks ago, most of my tv watching, beyond the new weekly episodes of The Stand (2020) and WandaVision, has involved rewatching Broad City, plodding through Golan the Insatiable, and making my way through Kim’s Convenience. You know, lighter and softer fare. So, looking through my Netflix queue, I decided on Alice in Borderland S1 for a change of pace.

For those who aren’t aware, it’s a Japanese live-action adaptation of the manga released back in December. We follow three friends – gaming enthusiast Ryohei Arisu, bartender Daikichi Karube, and IT tech Chota Segawa – who find themselves transported to an empty Tokyo. Once there, they are forced to play sadistic games of life and death daily to keep living. Soon they encounter other trapped people, and thus the quest for answers begins. Think Battle Royal meets Cube on steroids. 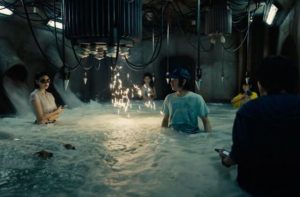 Two days and eight episodes later, I only have seven words to describe what I saw; good fucking lord this show is nuts. This show is an intense thrill-ride that refuses to let you go once it’s got you in its clutches. I was almost shell-shocked by the end, immediately putting on Kim’s Convenience to cool down and regain some equilibrium. And you know what? That’s an experience I wouldn’t trade for anything.

A big reason for this is the pacing. Alice in Borderland is relentless, constantly changing and shifting the status quo in emotionally fraught and viscerally tangible ways. The closest show in terms of pacing that comes to mind is The Good Place S2. If you haven’t watched it, the plot in The Good Place S2 moves so fast it’s like each episode contains enough story that a normal show would have spent an entire season covering the same ground.

While I wouldn’t go as saying Alice in Borderland S1 has the same pace – the show slows down in the final two episodes – it’s just a step below. Each episode features a game that threatens the lives of everyone involved (and there’s a lot of spilled blood) and a resultant seismic shift to the narrative. It not only keeps you on your toes, but it yanks you around with twists and turns every time you think you’ve found your footing. Yet, it’s also not tiring. If anything, it keeps you on the hook, wondering with bated breath just what horrors and carnage are in store for our intrepid squad of characters. And that’s not even getting into the interesting mystery – just who or what is controlling the games – that’s constantly nudging us along. 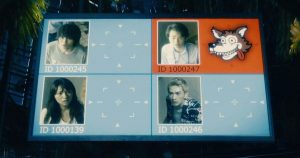 Speaking of which, this show wouldn’t hit as hard if it weren’t for the cast of characters. Even when we get to the more wantonly psychopathic characters in the back half of the season, the main cast gets fleshed out enough that you genuinely care what happens, whether it’s that they survive to fight another day or if they die a painful death.

As I was watching Alice in Borderland, my mind kept going to The Stand (2020). Namely, just how much The Stand (2020) bungled their cast of characters; the novel is remembered not for the plot, but because of how compelling the cast is, which should tell you how much they’ve dropped the ball. It’s almost criminal, but if you want a better understanding of those flaws, check out my ongoing reviews of The Stand (2020). All I’m saying is that Alice in Borderland, which features a revolving door of cast members, does more to make their characters memorable and worth rooting for/against than The Stand (2020) has gotten close to achieving. Like, at this point I could honestly care less about what happens to Stu, Glenn, Larry, and Ray as they march into Vegas. Conversely, for those that survive till the end of Alice in Borderland S1, I’m highly interested in seeing how their stories go in season 2. 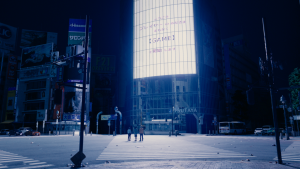 Lastly, I just want to talk briefly about the production design. I’m not sure how much was shot on location, but man they do a great job at making Tokyo looks empty. It reminded me of the opening scenes in 28 Days Later when Jim is wandering around a dead London. It’s a highly powerful moment, and it’s replicated, if not improved upon here in Alice in Borderland.

Now, all this isn’t to say Alice in Borderland S1 is perfect. There are some negatives I’d like to at least mention.

In terms of a bonafide flaw, there were a lot of monologues. Like a lot, enough to slow down the action. It’s not uncommon, but especially more so near the tail end of the season that a game goes down to the wire (they’re all timed) almost solely due to the sheer amount of times a character gives a grandstanding speech or engages in an exposition heavy back-and-forth discussion.

Granted, I think this is a hold-over from Alice in Borderland being adapted from a manga series. From the manga that I’ve read and the anime I’ve seen – full disclosure, I could also be talking out of my ass since my knowledge of anime and manga is still pretty limited, so feel free to comment if I’m off base – this is how a sizeable amount of the story is presented, especially shonen-based content. While I’ve grown slightly inured to this, it’s still a trope I’m not overly a fan of; it leans into “tell, don’t show” territory, which is opposite to what it should be. That said, I can see this bias being based in western-storytelling traditions, so when it comes to this kind of media I’ve learned to go along as long as it isn’t too blatant (no anime series hundreds of episodes long for me).

Moreover, I think it’s more that the content of Alice in Borderland could turn people off rather than outright flaws. Of particular note is the death. This show is soaked in blood. People die in pain and in fear, sometimes by the dozens if not hundreds. The only show that I’ve seen recently that comes close is Onyx Equinox, and that is based around systematic blood sacrifices (side note: if only Onyx Equinox focused on characters and story elements like those in Alice in Borderland, it might have done better). Main cast members aren’t immune to this; part of why I’m trying to avoid so many specifics is because no one is safe from death, which can come at any time. Plus, I’m betting quite a few of the more straightforwardly brutal games can be triggering for some people. That, along with the sheer emotional volatility at play means Alice in Borderland could very easily be too much for someone, and I wouldn’t blame them.

So, all that said, I just have to repeat myself from earlier. God this show is fucking nuts, and I love it for it. If any of this sounds remotely appealing to you, check out Alice in Borderland S1. I doubt you’ll be disappointed.