The Queens Gambit, released on Netflix in October of 2020, is appearing on quite a few of the “End of the Year in Television” lists that seem to pop up all over socials this time of year. The show soon found an ever-increasing fan base after its fall release, and may even be getting another wave of attention during this end of year wrap-up season. If you haven’t seen the show, odds are you’ve heard of it or seen an intriguing chess-related meme pop up on your social media feed.

Let’s start with the good news…

You don’t need to love chess in order to enjoy this show. While our main set of characters pursues chess with a hyper fixation, the game of chess easily serves as a conduit for you to relate to the passion of our main character Beth, played by Anya Taylor-Joy. Anya Taylor-Joy’s ability to portray Beth is one of the best parts of this show. From Split to The Witch to Emma, Taylor-Joy is a delight to watch on screen. The Queen’s Gambit is no exception.

In fact, Anya Taylor-Joy’s performance might be one of the best parts of this show. In a similar vein to troubled leading ladies in shows like Fleabag and Killing Eve, there is a beautiful balancing act in The Queen’s Gambit. With every moment of depravity, we are met with a moment of elegance. Anya Taylor-Joy brings a human element to her role as a female lead that is becoming more and more desirable for audiences to see in both television and film. People are complicated, but people are also beautiful. Audiences are demanding to be reminded of that more and more every season of television and film.

Those who revel in a good camera shot will also enjoy the level of attention to symmetry and aesthetics throughout the show. Once you notice that most of the shots in The Queen’s Gambit are framed to be symmetrical, it’s hard to not notice. With a set and costume design that channels a “dark academia meets Marvelous Mrs. Masel vibe,” the show finds fun and a somewhat dreary aesthetic. Costume design throughout the show also demands to recognized. Like a chessboard, a black and white color scheme permeates Beth’s wardrobe. No doubt a chess whiz watching the show would notice layers of symbolism between the storyline and the chess-like nature of our character’s wardrobe. 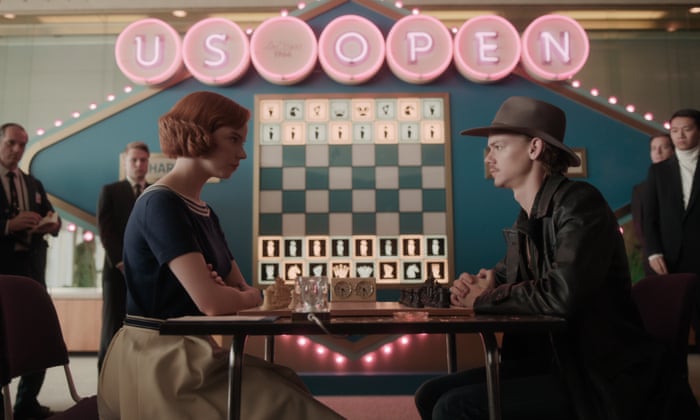 And now the bad news.

The Queen’s Gambit has a strong start but towards the end of the series, the audience can get lost in the intricacies of chess politics. There is an overwhelming amount of chess competitions featured in the show. While in the first half of the miniseries the competitions are exciting and high stakes, the sting of a competition win/loss is a little less potent towards the end. The audience is asked to keep up and treat every competition like it is the grandest of games when in reality there is a hierarchy to the chess competitions that the average fan of the show wouldn’t understand. While some might call this a creative choice to showcase how Beth treats the competitions, the choice isn’t strong enough to adequately convey that sentiment.

What makes the number of chess competitions even more difficult to bear is the stagnancy seen in Beth’s character development towards the latter half of the series. While the beginning of the show is engaging and easily binge-worthy, the audience can become a little less attached to Beth’s story. In the last couple of episodes, you want to see Beth healed from her traumas, but the way in which she does or does not feels more rushed than the rest of the show. In what should be a great crescendo of Beth’s story, audiences are left with more of a soft finish.

While discussing the more negative elements of The Queen’s Gambit, it is necessary to point out the lack of diversity and how the stories of POC characters are used in the show. Early in the story, we are introduced to Beth’s childhood friend, Jolene. Jolene is a Black orphaned girl living in the 1960s and is introduced as Beth’s first real friend and confidant. Jolene is in the show for the first couple of episodes, disappears for a majority of the series, and then comes back in the last episode to be a part of the finale. As one of the only Black characters on the show, Jolene’s story was used solely to assist our main white protagonist’s mission to be the greatest chess champion in the world. The show is set in America in the 1960s, a decade largely known for the Civil Rights Movement, and yet we maybe see one or two comments made about it in the entirety of the show (yet, we do hear a lot about Communism and Russia). We were offered very little insight into what could have been a very compelling character. Many different blogs, reviews, and opinion pieces have raised their eyebrows to this as well.

Should you watch it?

From my viewing, I think that the show captures a broad enough audience that there is a good chance you will like it. If you are a fan of shows such as The Marvelous Mrs. Masel and The Crown, for sure give it a chance. Anya Taylor-Joy’s performance, as well as other notable performances from Thomas Brodie-Sangster and Chloe Pirrie, make it a delight to watch even taking into consideration the slow finish. Overall, I recommend The Queen’s Gambit, especially if you are looking for a weekend binge-watching show.