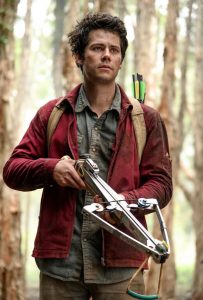 Love and Monsters. From the title alone, you can probably guess what this movie is about. Spoiler: It’s about love. And it’s about monsters. While initially set for a widespread theatrical release in February of 2021, the studio opted to instead release the film digitally this past October on account of Covid-19. Subsequently, Love and Monsters became the number one most rented film on FandangoNow and Apple TV in its debut weekend, critics praising it’s sweet, but ultimately forgettable, plot. The film was directed by Michael Matthews, who’s breakout movie, Five Fingers for Marseilles, won best film at the Africa Movie Academy Awards, and also stars the charming Dylan O’Brien, known most notably for his stand-out performances in Teen Wolf and The Maze Runner series.

Love and Monsters follows O’Brien as Joel, the clumsy and romantic protagonist of the film, who has been surviving in an underground bunker in a post-apocalyptic world for the past seven years. The cause of the apocalypse? All cold-blooded creatures on Earth have mutated into large, carnivorous monsters after being exposed to chemical fallout from rockets. These monstrous mutations has made the above-ground uninhabitable for humans, who have suddenly and drastically fallen from the top of the food chain. 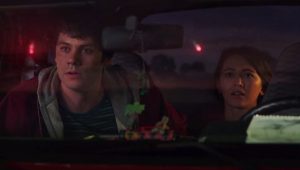 We get a glimpse into Joel’s life and learn quickly (via some very corny voiceover exposition) that everyone in his colony has romantically coupled up over the years. Everyone, that is, except for Joel. Instead, Joel has remained infatuated with his pre-apocalypse girlfriend, Aimee (Jessica Henwick), who he has recently discovered to be alive and living in a colony twenty-five miles away. After an attack on his own colony, Joel impulsively decides to go on a quest above ground to find Aimee and reunite with his long lost love, despite his habit of freezing in the face of danger and complete lack of survival skills. 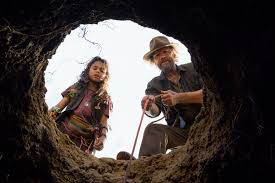 While above ground, Joel discovers a stray dog named Boy, who helps protect him from various dangers, ranging from a mutant toad to poisonous berries. After falling into a nest of worm monsters, known as “sand-gobblers,” Joel is saved by the grumpy and pessimistic Clyde Dutton (Michael Rooker), and the spunky and wise-for-her-age Minnow (Ariana Greenblatt). The pair claim to be survival experts, and allow Joel to journey with them, teaching him valuable skills about the monsters who inhabit the outside world. After parting ways, Joel encounters a Queen Sand-gobbler, which nearly kills both him and Boy, until he destroys it with a grenade. His victory is short-lived though, and the venom of the leeches attached to him cause him to hallucinate and then pass out. 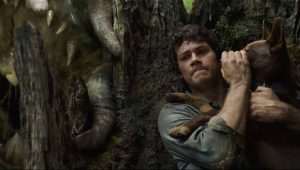 When Joel wakes up, he realizes he has been miraculously discovered and saved by Aimee and the colony of elderly survivors she cares for and leads. Their reunion is less than ideal, and Joel realizes they are vastly different people from who they were seven years ago. The movie then takes a turn for the bizarre, and the last act follows Joel and Aimee as they realize the new nautical survivors at the colony are not there to help, but instead there to steal supplies and load them onto their boat powered by a mutant crab. No, I did not make that up.

The final battle proceeds how you would expect it to. Joel finds his courage, saves the day, saves the girl, and gets that final kiss. He completes his hero’s journey by saying goodbye to Aimee, who promises to find him again one day. He then travels back to his colony alone to lead them to a rumored haven in the mountains. He encourages others to do the same, inspiring people to leave their safe bunkers and reclaim the outside world. The end. 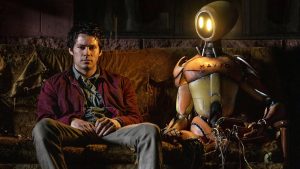 Now. This movie was…interesting, to say the least. While I didn’t necessarily go into it with high expectations, I also didn’t expect to leave feeling as frustrated as I did. The plot holes were numerous, and the script would continuously contradict itself over and over again. My roommate, who was kind enough to suffer through this movie with me, pointed out the confusing logic of creating a world where complex Artificial Intelligence exists, yet the character’s only way to communicate is via an old and unreliable radio with a tendency to cut out at opportune moments. This becomes even more confusing when we learn the Artificial Intelligence system – a robot named Mav1s – has access to a database of information that would certainly require an internet connection of some kind to function. If this is the case, then why rely on radios that seem to work only half of the time? Is it simply because the writers wanted a quick way out of conversations? Why include an AI system in the first place if you’re not going to utilize it except for one, quick throwaway scene? The logic is confounding, to say the least. 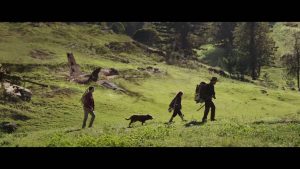 I know I’m probably getting too caught up in the small details here, but the movie is littered with inconsistencies like that. My favorite example of this can be seen in the confusing underground bunkers humans now inhabit. While the narrative exposition makes a point of emphasizing this is the apocalypse and resources are scarce, the set-decorators were not on the same page when dressing the bunker Joel and his colony resides in. Their bunker is fit with a complex system of tunnels, plants that are miraculously growing without sunlight, piles and piles of canned goods and supplies, a stove with running electricity, and a literal cow that lives in the bunker with them and provides milk upon request. I understand I should suspend my disbelief and accept these frustrating rules of the world the screenwriters created, but I draw the line at lazy storytelling and miracle cows. 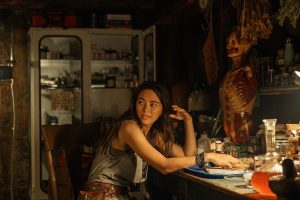 Not only are the rules of the world baffling, but Joel’s character journey leaves you feeling unsatisfied and disappointed after the finale. The entire script sets up his journey to end with discovering a newfound appreciation for his strengths, as well as the realization the grass isn’t always greener on the other side. But instead of coming to this conclusion, the entire movie turns on a dime at the very last minute and ends with Joel and Aimee reuniting for a passionate kiss and a promise to find each other again. Just when it seems like Joel is moving on and coming to the understand it was unrealistic to place all his happiness on the idea of one person, he instead completely misses the point of his hero’s journey and vows his love to Aimee once again. Meanwhile, Aimee, who previously emphasized to Joel that she was grieving the death of a past lover, changes her mind after seeing Joel save one mutant crab and kisses him back, going so far as implying she will wait for him and find him again one day. All that character progression…for nothing. 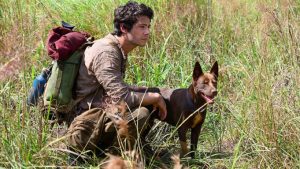 Now don’t get me wrong, while the film certainly disappointed in several regards, there were some strong aspects of the film I’d like to praise. Dylan O’Brien is the most notable strength, his performance as Joel giving the film moments of emotional depth and charming comedy. O’Brien has a talent for taking any character he’s given and imbuing it with a palpable charisma that makes watching him perform both relatable and charming, no matter what he’s doing. While Joel is not necessarily a well-written character, O’Brien manages to create chemistry with every co-star he interacts with, including a dog and a literal robot. That, to me, is talent.

Furthermore, the CGI in the film is something to behold. The film was greatly enhanced by cinematographer Lachlan Milne’s work, which has previously been seen on Stranger Things – his touch for creepy and disturbing creatures becoming apparent in any scene a monster is featured. The visual effects were brought to life via the combined efforts of Millfilm Adelaide, alongside MPC Bangalore and MPC LA. I’m not normally one to care about visual effects, but I was thoroughly impressed by the frightening and disturbing look of some of the mutated monsters, which managed to keep one foot in reality, and one foot in science fiction in their designs. For a film that fell short in a multitude of areas, the gore and guts satisfied in every regard. 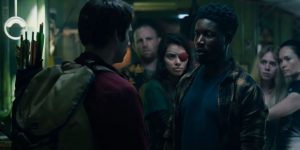 At its core, Love and Monsters could have been a wonderful allegory for found family, and that love can come in all shapes and forms. This, mixed with Joel’s struggle to accept his past trauma, could have worked together to remind viewers that it doesn’t always have to be romantic love that gets us through the unimaginable. After all, it wasn’t Aimee who was picking Joel up from the ground after watching his parents die. It was his colony family who carried him away from that pain and brought him to safety. The potential for something really beautiful was there, but the writers discredited all of this the second Joel and Aimee kissed and vowed to find each other again. He didn’t move on and he didn’t learn a lesson, which, for a movie about a man going on a perilous journey of self-discovery, is severely disappointing. 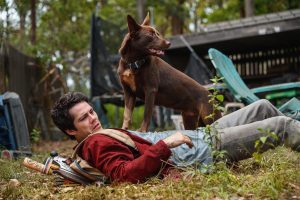 Overall, I can see what Love and Monsters was trying to do. The voiceovers, rules of survival, and post-apocalyptic setting made it feel like a poor attempt at replicating what Zombieland did in 2009. It tried to use a John Hughes inspired love story to set it apart from other monster movies, but the concept’s impact was lessened by the poor writing. If you are a longtime fan of Dylan O’Brien and enjoy supporting his work as I do, it’s certainly an entertaining movie. But in the end, it’s not going to provide much more than a few jump scares, a laugh here and there, and a forgettable ending that will leave you disappointed.