Barb and Star Go To Vista Del Mar is one of the most joy-filled comedies to come out in a long time. Back in 2019, before the world shut down, the trailers for this movie filled moviegoers with hope and excitement to see what Bridesmaids writers Kristin Wigg and Annie Mumolo would be bringing to the table with Barb and Star. With its delayed release, fans eagerly waited for this movie to hit streaming platforms. What we got exceeded expectations and transported us to a colorful and vibrant world that truly felt like we were also on vacation with our good friends, Barb and Star. 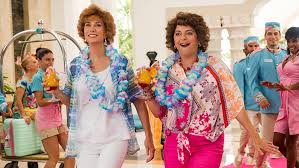 The movie follows two lifelong friends, Barb and Star, when they decide to go on vacation and leave their Midwestern town when their lives no longer look how they planned them. When they arrive in Florida, they are met with the adventure of a lifetime as they navigate rediscovering themselves while maintaining their friendship.

If you follow improv or have been involved in some improv scenes yourself, Barb and Star felt like a beautiful example of the “yes, and” principle. You give your scene partner a suggestion and your scene partner’s responsibility is taking the suggestion you gave and saying “yes, and…” in order to elevate the scene. Wigg and Mumolo are improv stars and Barb and Star is a testament to their ability to take the absurd and create a believable world around it. The world of Barb and Star feels limitless, everything seems possible.

As a follower of Wigg and Mumolo, I thought that I had a good grasp of what to expect from Barb and Star. Wigg and Mumolo’s performances were spotless pieces of comedic genius, but I found myself continually being surprised by 50 Shades of Gray star Jaime Dornan. Dornan gives a showstopping comedic performance, including musical numbers. Dornan stepped into an intimidating role when he signed on to play the handsome stranger, Edgar Pagét, alongside comedic legends Wigg and Mumolo. Dornan plays Edgar Pagét with what can only be described as a genuine innocence that yields such great, natural comedic timing. 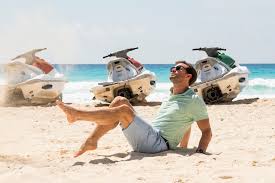 Barb and Star feels like a Disney Channel movie musical, but for adults. The music featured in Barb and Star is just as reflective of the limitless world Wigg and Mumolo created. Bold and theatrical, the music serves as an original and whacky conduit for humor and story progression. Even the general soundtrack for the film is intentional and FUN. Barb and Star gave us the techno remix of My Heart Will Go On that we never knew we needed. My one criticism of the musical numbers in Barb and Star Go To Vista Del Mar is that there wasn’t more of them. 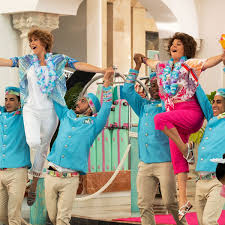 There is a childlike joy that fills every frame of this movie. The color palette is bold, bright, and outrageous. The same can be said for every performance in the movie. Wigg and Mumolo tag team as the two principal characters and transform themselves into the odd and eccentric middle-aged midwestern women, Barb and Star. As the writers and stars, it is evident in every line they say that they are having the time of their lives. This feels like a movie that was really fun to make, which makes it a ton of fun to watch. While not heavily featured, appearances from Vanessa Bayer (SNL)  and Phyllis Smith (The Office, Inside Out)  as Barb and Star’s hometown friends create such a great contract between the vacation experience of Barb and Star and the dreariness of the Midwestern Town from which they came. The audience is left wanting more from each of them as every line they have is precise and gloriously hilarious. Cameos from various other sketch and improv comedians allow the ensemble to shine bright and bold.

While not the intention for the movie, as it was created and originally slated for release before the COVID-19 pandemic, Barb and Star does serve as a sort of cinematic therapy for audiences. Watching Barb and Star Go To Vista Del Mar is nostalgic for a world without COVID. A world with crowds of people laughing and singing along to songs they know and a world where this movie could have been experienced in a packed movie theater. It is creative, sweet, bold, and outrageous and it transports an audience in a way that I haven’t experienced from a movie in a long time. The world feels dark and heavy, even as we are headed towards warmer weather and Spring. It can be easy to seek out movies that match the world around us, but if I can make a small suggestion, it is to remember the medicinal power of comedy. If you are looking for a film to add to your list, I highly recommend Barb and Star Go To Vista Del Mar.