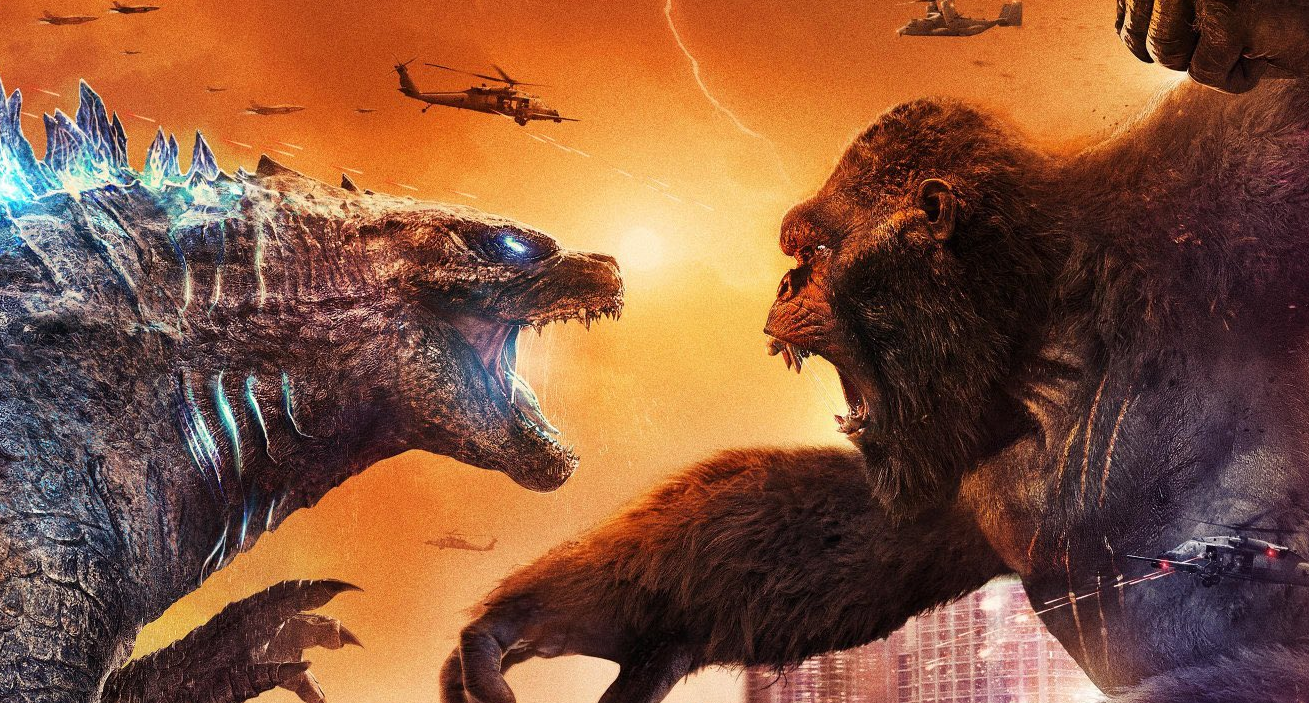 I haven’t seen any Godzilla movies besides the first (the 1954 first, not the 2014 first) and I haven’t seen any King Kong movies besides the first and the Peter Jackson remake. So I came to Godzilla vs. Kong with no expectations built on the previous “monsterverse” movies, and really just showed up to see two giant animals beat the shit out of each other. And my god did I get what I came for.

From the opening, in which Kong wakes up, yawns, scratches his butt, and takes a bit of a shower in a waterfall all set to the sweet doo wop sounds of Bobby Vinton’s “Over the Mountain, Across the Sea,” it’s clear that Godzilla vs. Kong knows that we’re all here to have a good time. This isn’t a self-serious movie that’s going to attempt to make us feel for human characters or only hint at its monsters as looming threats that symbolize things. This is a movie that starts with a giant monkey scratching his butt and ends with a wildly destructive oversized creature feature brawl.

But it’s also clearly made with a lot of care and love for these characters (the monsters, not the humans). It’s absolutely stunning to look at, the colors are so crisp and bright that they clearly don’t at all reflect our real world, and the gorgeous lighting, that even further emphasizes these colors, reminded me of Blade Runner 2049. The plot is a bit dense but it’s overwhelmingly just there to get us to monster fights and moves along rather quickly with just enough exposition to get us to the next scene. There is a side plot that could, and should, have been cut, but in an epic monster fight movie that still comes in under 2 hours, a superfluous side plot is forgivable.

The cast is also stacked. Rebecca Hall, Brian Tyree Henry, Alexander Skarsgård, and Millie Bobby Brown all star and (mostly) lend the human proceedings some legitimacy. Though this is the first thing I’ve seen Brown in that isn’t Stranger Things and I’m not entirely sure if she can act or is just really good at being Eleven. Even with a widely recognizable cast, the best actors in the film are new face Kaylee Hottle and the computer generated Kong. The great ape’s face is shockingly expressive and the conversations that he has with the young Jia (Hottle) via sign language are the only thing in the film that made me feel anything, but they really made me feel something, which was not something that I expected from a monster fight movie. The fact that these scenes work so well, highlight that Godzilla and Madison (Brown), the other girl-and-monster-with-a-bond duo (from what I gathered), never share the screen and thus aren’t afforded the same emotional beats.

But affecting emotional beats are just a bonus for a film that so thoroughly delivers on the promise of its title. The first of two fights between the titular titans takes place at sea on a fleet of aircraft carriers allowing Godzilla and Kong to blow things up and dive underwater, often taking humans with them lending their fight a sense of scale and stakes. It literally got my pulse pounding. Director Adam Wingard’s horror background is well suited to this fight where much of the tension is built from not knowing where Godzilla is or when he’ll pop back up out of the water and attack. I was thrilled by the fight and the beautiful interplay between the water, explosions from the aircraft carrier’s guns, and the always brilliantly orange sky made it impossible for me not to smile.

The penultimate battle of the film takes place in Hong Kong among multi-colored neon lit buildings and watching it feels like the visual equivalent of stuffing your face with a bag full of candy from the candy store, to be clear this is a very good thing. It’s a bit disappointing then that the finale that takes place in the morning isn’t quite as colorful. But it is nice to see Kong and Godzilla team up against a new monster that is of course a product of man and capitalism. It’s not subtle, nor original, but hey it works every time.

I was shocked by how much I enjoyed Godzilla vs. Kong. I had no expectations and the fact that it not only delivered on the titular fight, but also managed to be one of the most visually striking movies I’ve seen in months and made me tear up because a big monkey was sad speaks to just how much love went into this thing. I cannot recommend this enough (if you’re interested in seeing giant monsters fight).

Watercooler Reviews | “The Falcon and the Winter Soldier” Round Table: Episode 4, “The Whole World Is Watching”

This is cinema. Support the theatrical experience.

“I got exactly what I expected, but for some rea

Has anyone been watching 'Them'? What do you think

The McNeil Minute | The 2021 BAFTA Winners By Rob

Double Tap if you saw the newest Dick Wolf show, '

“All that said, The Whole World Is Watching was

The McNeil Minute | The 2021 BAFTA Winners