Watercooler Review | I Care A Lot

I Care A Lot, when given a synopsis or movie trailer, presents itself as a fairly normative heist movie. Marla Graystone, the movie’s principal character, convinces a series of corrupt medical and judicial professionals that members of the local elderly community are unable to take care of themselves. Marla Graystone appeals to the courts as the perfect legal guardian, able to escort them into assisted living facilities and then rob them blind of all of their assets and independence.

What is not obvious in the initial previews and synopsis of the movie is the level of camp and humor that threads itself through this malicious storyline. When Marla Graystone crosses the line in the lives of one of her geriatric victims, Roman Lunyov, played by Peter Dinklage, comes in and challenges Marla for the role of the antagonist in this story. There is a turning point where the audience is wonderfully confused as to who we should be rooting for. This shift in power dynamics sets up Rosamund Pike, who plays Marla Graystone, to give an absolute slam-dunk performance that has already earned her a Golden Globes win.

Marla Graystone is the focal point of the movie. Pike has mastered the art of playing the lovable and ever so twisted female villain. With poise, class, and grace that has traditionally been reserved for Disney Princesses and members of the royal family, Rosamund Pike continues to challenge the image of a villain. If Pike terrified and mesmerized you in Gone Girl, I Care A Lot is a movie to add to your watchlist simply to see Pike once again channel similar energy. Another notable performance is that of Dianne Weist. Weist impresses with her ability to subtly work darkness into a normally unassuming character. Wiest’s character enters into a complex and fun to watch power struggle with Marla Graystone. 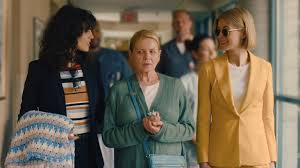 A performance that I wish had been nurtured more is that of Peter Dinklage in his role as Roman Lunyov. While Dinklage created a fun and vibrant villain within the confines of the script and direction that he was given, I walked away from I Care A Lot wishing that Dinklage had had the opportunity to darken his take on his character. The plot and script of this movie allow for humor, some of the directional choices given to Dinklage took the audience out of the world that was being created in an attempt to fit the bill of a dark comedy. If I Care A Lot had leaned more in the darkness that organically presents itself in its plot, I wonder what layers of character development could have been discovered in Dinklage’s character? What would this movie look like if the camp and humor were turned down? 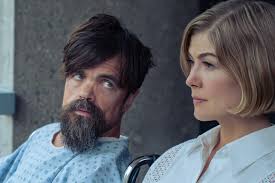 J Blakeson, the writer and director, did not want to turn the volume down on irony, however. One subtle choice that illustrates this is the massive vape that Rosamund Pike uses throughout the film. Pike’s character is elegant and tasteful in every scene and every costume is detailed with clean lines and simple silhouettes. Everyone has their vice, but there is a slight disturbance that occurs for audiences whenever Pike takes out this vape pen- one might expect an elegant cigarette or really anything other that than the vape pen to demonstrate her vices, but this specific choice backs up some of the campier choices made by Blakeson’s jarring world of I Care A Lot.

While I Care A Lot was an entertaining watch, Rosamund Pike’s performance is what makes it stand out as a suggested addition to your watch list. At times, it feels like a summer blockbuster movie made for people who would rather watch Gone Girl than The Avengers. In the grand scope of the movies likely to remain present for the duration of Awards Season, I Care A Lot is a fun and easy watch- it doesn’t leave audiences shaken or compelled to think about it for days on end. In your Awards Season watchlist, I would watch it between the Trial of the Chicago 7 and Minari as a mental and emotional reset.