Hello all! Welcome to something I’d like to call “Vudu Child.”  Over the past copy of years, I’ve gathered together a sizable collection of digital film releases mostly through Fandango-owned website Vudu. And rather than let them sit there and collect digital dust, I’d like to go through my collection and write about them. It’s a good way for me to gush about some films I really love and for me to recommend them to you. Hell, maybe some of these films don’t hold up as well as I remember (I certainly hope they do). Anyways, I hope you enjoy my ramblings about what I’ve been watching: 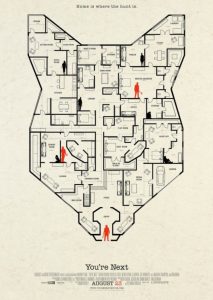 Oh happy day! It’s that time of year again. Yes, it’s time for pumpkins and leaves and screaming bloody murder. It’s October and that means spooky season. I’d like to start off spooky season on the right foot and discuss the duo of Adam Wingard and Simon Barrett. You see Simon writes the scripts and Adam directs them. They’ve made two films called You’re Next and The Guest and both are incredibly entertaining rides. If you haven’t seen either one and are looking to kickstart your Halloween, I’d like to share my thoughts.

Let’s talk about You’re Next first. You’re Next is the story of the Davison family, a large clan reuniting in an old rural manor for the wedding anniversary of mom and dad. If you’ve seen a low-budget horror film in the past decade, you’ll probably recognize some of the family members. Horror icon Barbara Crampton is here as the matriarch. There’s Amy Seimetz (The Sacrament) and Ti West (The House of the Devil) as a couple. A.J. Bowen (The Sacrament and The House of the Devil) and Joe Swanberg are also here as brothers. Simon Barrett himself even plays one of the masked villains. And, for a brief cameo at the beginning, we also have Larry Fessenden. Once again, if you havemade an indie horror film in the past decade and you do not have Larry Fessenden somewhere in your cast, you did something wrong. Of the family members we follow, we start off with A.J. Bowen’s Crispian. En route to meet the parents for the first time, Crispian has brought along his current girlfriend, Erin, played by Sharni Vinson. You’re going to want to remember that name because the family soon comes under attack. Outside laying siege are three psychopaths with animals masks and crossbows and they don’t take prisoners. For this section of the film, You’re Next becomes a typical slasher film. Characters are soon picked off in various ways and you may be thinking, “okay, i’ve seen this before.” This is where you’d be wrong. Vinson’s Erin is the real surprise here. Growing up on a survivalist camp, Erin knows how to defend herself and fight back. Can she manage to put an end to the siege and walk away still breathing? 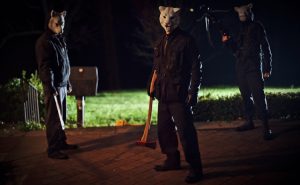 You’re Next is the horror movie version of one of my favorite sub-genres. This type of film has been best used in action films. Basically, the set-up is this: a group of villains decide to wreak havoc. They come across a seemingly ordinary protagonist and do wrong by them. This cannot stand. It is then we find out that the protagonist is a one-man-army with skills capable of anything. The villains have done messed up now. It’s time to kick ass and take names. Modern examples of this include John Wick, The Equalizer, Taken and even The Raid. Now imagine that basic concept but set in a slasher movie. This family isn’t the most tight-knit group but it’s still upsetting seeing them picked off so savagely. This is why it’s so entertaining when Erin starts fighting back. Generally speaking, I’m not a huge fan of slashers. I like Scream and A Nightmare on Elm Street and I even dig the recent throwback known as Hell Fest. But unless it’s like Final Destination and the deaths are memorably creative or I care about the characters, I don’t get too much out of them. However, having the victims fight back certainly makes things interesting. It’s what made the 2018 Halloween reboot engaging and it works even better here. To this day, You’re Next still has one of the best and most creative deaths scenes I’ve seen in any horror film. Believe me, you’ll know it when you see it. It is a thing of true gruesome beauty.

Looking at Sharni Vinson’s IMDB, there aren’t a ton of credits since You’re Next. The film was shown at festivals in fall of 2011 but didn’t get a theatrical release until summer of 2013. Vinson is originally from Australia and doesn’t have any credits as an actress past 2018. I don’t know if this was a conscious decision on her part or if there just weren’t many scripts coming her way but I demand an explanation. Vinson is so good as Erin and cements her as one of the best “final girls” to come along in forever. There are the usual suspects when we talk about female protagonists in horror films. You’ve got your Sidneys, your Sallys, your Nancys, Ripleys and Lauries. They are all classic examples for a reason. Erin more than deserves to be named alongside them. You’re Next still holds up today as a clever slasher/survival mash-up. Besides writing and starring, Simon Barrett also produced the film. Director Wingard edited the film and is credited with doing some of its’ music. This is a project that they clearly believed in and I’m glad it came out the way it did. The score in particular (also credited to Jasper Justice Lee, Mads Heldtberg and Kyle McKinnon) just has to be an homage to horror films from the 1980s. Hey, speaking of homages to the 1980s… 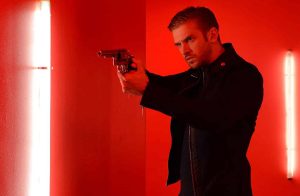 I’ve seen The Guest at least four times now. Twice in theaters, once at a friend’s house and now within the past week. It kicks ass every time. It is frankly beyond me how this only has a 6.7 rating on IMDB. The film introduced me to two breakout stars who have had solid careers since. Maika Monroe has gone on to do great work on the indie circuit but she’s probably most famous for the 2015 instant-classic It Follows. And then there’s the guest himself, Mr. Dan Stevens. Look I know that there’s very little chance a small genre film like this gets award consideration but, oh man, is Dan Stevens just that good here. This is what people mean when they talk about a star-making performance.  It speaks to the talents of Wingard, Barrett, Vinson and Stevens that both You’re Next and The Guest have such unforgettable characters. I had never heard of Dan Stevens before this film and maybe you haven’t either. But have you watched the FX series Legion? Did you see the Emma Watson Beauty and the Beast? Ever turn on Downton Abbey? Stevens is in all three. You can only imagine how shocked I was when I heard his real British accent since he has a perfect American one in The Guest. Oh those British actors and their flawless American accents. Especially with Christian Bale and Aaron Taylor-Johnson, you just can never tell.

The Guest is a perfect introduction to Halloween because, well, it’s set around Halloween. It’s also not really a horror movie up until it definitely turns into one. I’m just going to say right now that it’s best to watch this film knowing very little. There’s a minute-long teaser trailer you can find on Youtube and I recommend you watch that to get a feel for the film.  For now though, I’ll tell you just a little bit of the plot. Stevens plays David, a soldier of the U.S. Army who was present when his fellow soldier, Caleb Peterson, died.  Now recently out of the service, David arrives at the Peterson residence to check on Caleb’s family. There’s dad Spencer (Leland Orser), mom Laura (Sheila Kelley), brother Luke (Brendan Meyer), and daughter Anna (Monroe). Soon David is staying with them for a few days and even picking up Luke from high school. Things are going surprisingly well. This first half of the film is excellent because it puts down your defenses. It successfully convinces you David is the coolest mother to walk this great Earth. He’s good in a fight, can hold his liquor, and can basically charm anyone he comes into contact with. But, of course, David has secrets and you just know they’re going to come out. This is where the film shifts into high gear. The film is kind of like the 2011 movie Drive if it were directed by John Carpenter. Both films have protagonists that are effortlessly cool but also might be psychopaths. It’s just that this one is also a loving tribute to Carpenter-esque genre movies.

One thing that drives home that homage is the pulsating soundtrack. The soundtrack is a mix of actual songs from the ‘80s and songs clearly inspired by the ‘80s. Do you have a Halloween party coming up? Why not put on The Guest’s soundtrack? The soundtrack and the film in general pay tribute to what came before but aren’t just using it as a gimmick. You don’t have to have been alive in the ‘80s to enjoy this (hell, I wasn’t). This is the film that really raised the roof on Wingard and Barrett’s career. I’ll say it like this: I like You’re Next but I love The Guest. It’s a special film and one I doubt I’ll get tired of. Wingard and Barrett went on to bring some horror history back with their reboot of The Blair Witch Project. While their reboot, simply titled Blair Witch, wasn’t as successful as You’re Next or The Guest, even that had some moments of good fright. Barrett has gone on to become a director now with films such as Seance and V/H/S 94. Wingard most recently directed this year’s Godzilla vs. Kong, a film I personally had a ton of fun with. Whether the duo will return for another project is frankly up to them. The one-two punch of You’re Next in 2013 and The Guest in 2014 definitely made me remember their names. They have a knack for intense and fun horror-based action that consistently surprises. It’s a pleasure to start my spooky season off with them and their work. 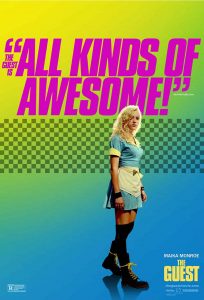