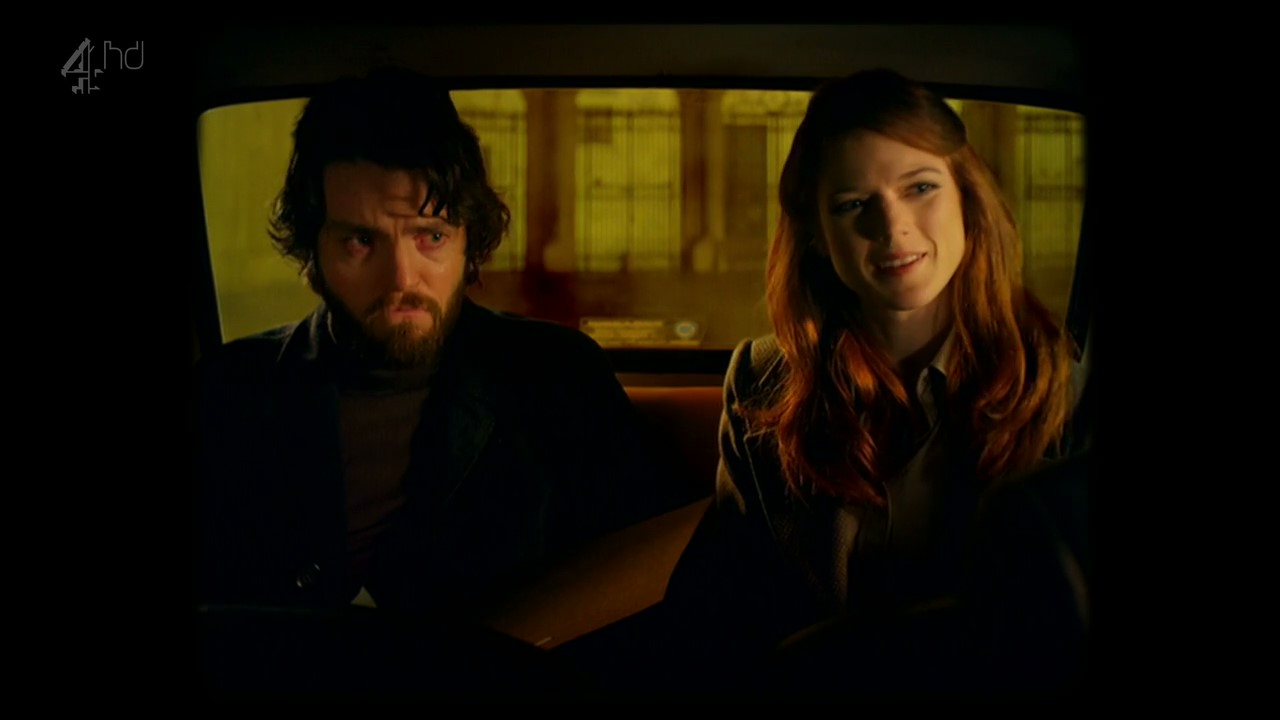 Good lord is Episode 2.1 an interesting hour of television. I mean, I knew this was going to be the case, but when I rewatched this episode on my train ride home on Christmas Eve, I was enraptured. Dennis Kelly could have just written an episode that takes place immediately after Episode 1.6, and honestly, that would be fine. Instead, we get a look at how all this started.

There’s the fateful first meeting of Carvel and Milner, the origins of Pietre and Jessica, the creation and loss of Janus, and more. In the process, we get the most distinctive episode of Utopia (UK) yet. In a way, it feels like Episode 2.1 is from a different show altogether, or at least a prequel spinoff (I’d be so down if that were the case), but is still Utopia (UK) through and through. So, while Episode 2.1 may be distinct, that doesn’t mean it’s good. Granted, it’s good. Quite good in fact. I’d go as far as to say it’s one of the best episodes of Utopia (UK), but it’s not perfect, and I’ll tell you why.

As I said in the intro, Episode 2.1 is an entirely different beast of a story compared to the whole of Utopia season one. It’s a flashback that spans a little over five years, spans multiple countries, but most importantly follows a character we’ve only ever heard about; a young Philip Carvel. Due to how the episode jumps around in time, I’ll describe the episode in chronological order.

A young Carvel (played by Tom Burke), looking to make an imprint on the world, meets a young MI5 agent named Milner (played by Rose Leslie) at a society party in 1974. After a long night of discussion about the world’s ills, namely the burgeoning issues related to overpopulation, they decide to do something about it. Milner, using her government influence, gets Carvel a job with a burgeoning, multinational bio-weapons group informally known as the Network.

After a grace period where they have success after success, the relationship between the two gets complicated. Carvel begins to have second thoughts as time goes on, worrying about playing God and becoming scared by Milner’s increasing ruthlessness on both a microscopic scale and a macroscopic scale, all on top of their respective home lives falling apart. This leads to Carvel destroying all his research notes and forced to abandon what family he has left while Milner sets the stage for the eventual rollout of Janus.

So, what does Episode 2.1 do right, and what does it do wrong? My big question with the good stuff is where to start. There’s the cinematography and the score, providing the context of Janus and the Network, I could go on. If there’s one thing I loved most of all about Episode 2.1, it was the relationship between Carvel and Milner.

Sure Carvel is the clear protagonist of the episode and the nominal premise is to provide the context of the origins of Janus and the Network’s plans. That said, what really elevates the episode is his interactions with Milner, which envelops everything from a narrative standpoint. From the moment they meet at that party, their chemistry is palpable. Hell, at one point Carvel is told that he and Milner share a “higher form of love”, something beyond mere romantic interest. So who told Carvel this? None other than Tom, Milner’s at the time romantic partner. And you know what, he’s right. They’ll only show up in this episode, but man kudos to Burke and Leslie for their performances. It says a lot that the episode becomes less interesting when the two aren’t interacting.

This chemistry isn’t the only thing about their relationship though. From the beginning they are simply the Nietzschean ideal of true companions; namely, they drive each other to greater heights. In particular, Milner gives Carvel the chance to change the world with his intellect, while Carvel gives Milner the chance to organize and carry out the ultimate mission. Going further with the Nietzschean philosophy, they view themselves as fulfilling a purpose comparable to the idea of the ubermensch. Hell, Milner repeatedly refers to their goal and Carvel’s intellect as god-like.

All that said, that’s only how their relationship starts. We get a whole arc between the two of them. Namely, how their flaws slowly drove them apart despite (or because of) their obvious mutual attraction. Carvel, for all his godly intellect, is sure as hell flawed like any mortal man. He experimented on baby Pietre, and after the experiments turned the baby into a murder machine – man that poor rabbit, and that poor kid too for that matter – Carvel just abandons him. This reckless experimentation, along with the death of his wife during Jessica’s childbirth and how ruthless Milner has become even to her allies, caused Carvel to have second thoughts about Janus and playing god. In the end, he makes a mysterious alteration to Janus, destroys his notes, and after his rescue from Milner goes into hiding at an asylum under an assumed named.

Milner conversely grew into her godly aspirations. This caused her to become much more ruthless, killing anyone who gets in the way of what she considered “the greater good”. This ranged from key members of the Labour party to establish a regime that she could easily manipulate, to Tom when he overheard the wrong conversation. This reached a peak when Milner had Carvel himself tortured for information about his changes to Janus – prediction: this will be the driving force of the season 2 narrative. What’s more, she threatened the same torture on Jessica – who’s at most 5 years old – if Carvel refused to talk. It’s quite a change, but one that’s nothing less than enthralling.

Well, what about the other good things in the episode? I mean there’s got to be more than just the drama of the evolving relationship between Carvel and Milner. Well, I did say that they changed the cinematography and score earlier, and honestly, that’s an understatement. Both are changed to reflect the change in settings. Namely, it goes from a post 9/11 world defined by increasing globalization and technologically fueled interconnectivity to a world defined by Cold War paranoia. Sure, when looking at the cinematography the camera angles and how scenes were shot weren’t appreciably different (to me at least). What stood out to me were the changes to the visual aesthetics that have defined Utopia.

On a normal episode of Utopia, the show normally pops with colorful and vivacious vitality. Episode 2.1 is different, to say the least. It’s darker. It’s grainier. Even the aspect ratios are different. The best way I can describe the changes is that Episode 2.1 is made to look like a TV program from the 70’s displayed on an old TV. When mixed with old newsreels of true British events, it’s astounding.

The score itself is also different. Like the grainier and darker visual aspects, the normally bouncy and whimsical score is traded in for something more subdued. There’s only one bit of music from past episodes I recognized, and that was the Jessica theme, which is already fairly somber. While this is more subtle than the changes to the cinematography, the episode wouldn’t work without the change in the score, since the livelier score of the present day wouldn’t mesh with the atmosphere the cinematography and settings helped create.

Now that I’ve covered the things I liked most about Episode 2.1, I’ll briefly go over the things I didn’t like. As is becoming par for the course of my Utopia (UK) reviews, my biggest complaints revolve around Milner. While she is dynamite on-screen when she’s with Carvel, her singular plot beats don’t make too much sense to me. This is mostly contained in the plotline where she, with the help of Letts’ assistant, works with members of the Conservative party in Parliament to end the control of the Labour party to help establish a regime whose policies would be friendlier to the Network’s ongoing operations.

I get that those scenes are there to show the burgeoning influence the Network has on world politics and showcasing Milner’s growing ruthlessness. That said I don’t see why they’re all that necessary. I mean, we get a good look at Milner’s ruthlessness when she has all the Network scientists working on Janus with Carvel killed, along with her threats to torture a preschool-age Jessica. Everything else just feels like padding. Also, while Episode 2.1 puts a lot of future plot points and characterization in context, this doesn’t extend to Milner’s plans in season 1. Like, we learn how Milner knows Jessica carries Janus in her blood, but it doesn’t make Milner’s whole scheme any clearer.

My other complaint is about the experiments on Pietre. Carvel does give an explanation for the experiment after it’s done. He claims the experiment was an attempt to isolate and remove aggressive tendencies aka the same thing Dr. Jekyll attempts in The Strange Case of Dr. Jekyll and Mr. Hyde. My issue with this is that feels like it comes out of nowhere, even after the explanation. If they had given Carvel a single line of dialogue beforehand explaining his interest in this subject matter, it would have saved the whole thing. For an episode that’s meant to give context to past events, it just feels like a lazy afterthought. It’s almost like Dennis Kelly needed an excuse at the last minute for Pietre to be abandoned and groomed by the Network into becoming the killing machine we know he will become. That said, this complaint, along with the Milner complaints, weren’t enough to mar my enjoyment of Episode 2.1.

In the end, Episode 2.1 is one of the best episodes of Utopia (UK). Dennis Kelly and company took a risk, essentially reinventing Utopia in a different era so we can follow Carvel, the man responsible for the whole sordid affair. We follow Carvel, from the inception of Janus to his confinement in an asylum under an assumed identity, along with all the tragedy that follows in his wake. I know we won’t see this specific era again, but man is it enjoyable while it lasted. The last 5 episodes of Utopia (UK) have their work cut out for them if they want to reach the heights of Episode 2.1.