A sequel to The Christmas Chronicles, offering more adventure and another destination holiday, this second installment stars Kurt Russell reprising his role as Santa.  Goldie Hawn, Darby Camp, Judah Lewis, and Kimberly Williams-Paisley also star in Christmas Chronicles: Part Two.  Kate Pierce (Darby Camp) is now a teen who is unhappy over her mom’s new relationship. Kate’s bitter that her mom Claire (Kimberly Williams-Paisley) has been cozying up to an old pal named Bob (Tyrese Gibson) whom Kate worries will make everyone forget her deceased dad Doug Pierce (Sunny Suljic). Kate runs away and is reunited with Santa when a naughty and troublemaker elf tries to cancel Christmas. Transported back to the North Pole, viewers learn that Kate’s become quite a legend for her bravery with Santa’s elves in the first movie.

The first time I watched this sequel, I knew that The Christmas Chronicles franchise was on solid ground by how happy I was to see the main stars again.  This time around Teddy and Kate are two years older, with Kate a bratty teenager and Teddy a calm wiser older brother, and we quickly see that the siblings from the first Christmas Chronicles swapped attitudes.  During my second time watching of Christmas Chronicles: Part Two, I enjoyed Goldie Hawn even more. Her enduring innocence pulses at the age of 75. (Happiest belated to this actress, whose birthday was on 21 November.) 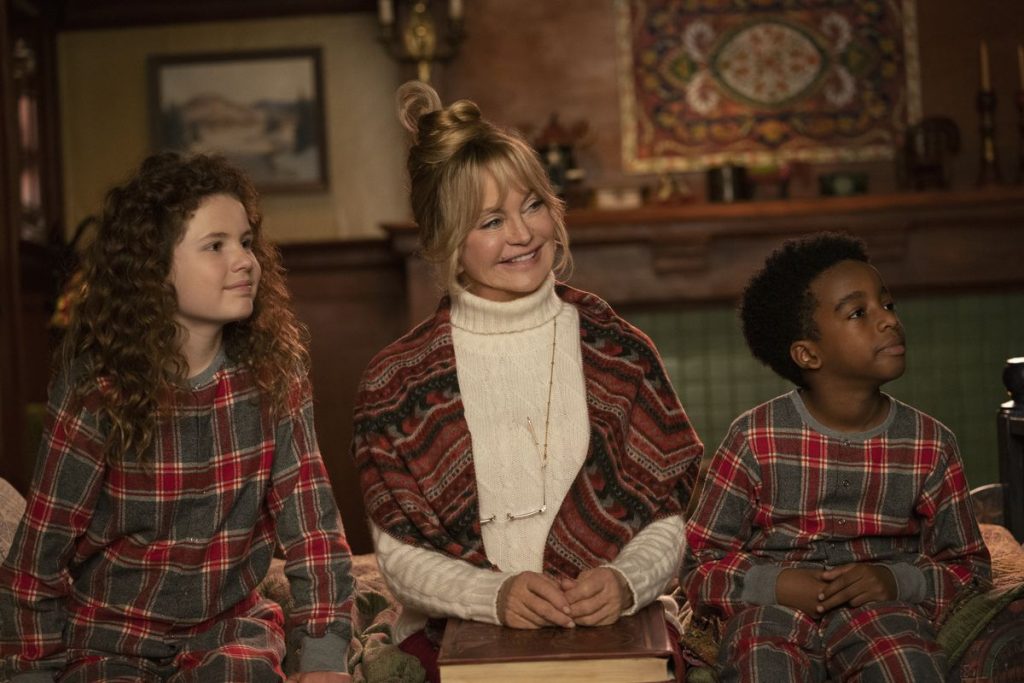 The Christmas Chronicles: Part Two was directed and co-produced by Chris Columbus who makes comedies that star young actors.  Chris Columbus’ filmography as a director includes Adventures in Babysitting and Mrs Doubtfire, and he wrote Gremlins and The Goonies.  I’d be remiss if I didn’t mention that any child five to ten years old will be captivated by Columbus’ latest adventure comedy.  In this sequel, the fan base of The Christmas Chronicles’ elves succeeded in getting the festive faires much more screen time.  There is also a flash mob musical in Boston’s Logan Airport  which is a technically challenging scene that Kurt Russell pulled off with rhythm, soul, and panache opposite legendary Darlene Love.  All that creates a film which will impress itself onto the memories of the children of the 2020s, in the same way I as a kid of the 80s remember and rewatch Adventures in Babysitting and The Goonies, two significant movies from my youth.  So Columbus has done it again, partly because he recycles some successful tropes from earlier films. There are scenes in Christmas Chronicles: Part Two when Santa’s elves become maniacal and mutinous, like Gremlins gone wild.

The first Christmas Chronicle left me cringing because it was obvious the franchise hadn’t found its feet – the ensemble cast had not bonded yet, so characters’ connections felt too fluffy and contrived, and Claire and Doug’s romance was portrayed with too much schmaltz.  However, in Part 2 Kurt Russell and Goldie Hawn become my favorite Mr. and Mrs. Claus couple.  And Tyrese Gibson as Bob, the boyfriend of Kate and Teddy’s mom, is a fantastic addition to the Pierce family.  The carol at the end of the film, sung by the expanded Pierce family ‒ then by the town of North Pole ‒ is lovely.  Christmas Chronicles: Part Two is the more substantial and heartwarming of the two movies, largely because Kurt and Goldie are a cinematic couple on the level of Katharine and Spencer.  So I am officially a fan of this Christmas franchise, partly because of the perfect cast, which I expect will become even better in The Christmas Chronicles: Part Three.