What some may consider a fluff-piece, others consider a masterpiece. And so be The Umbrellas of Cherbourg (dir. Demy, 1964). Reviewed as both “banal” and “brilliant,” this film went on to win the Palm d’Or in 1964 and secured five nominations at the Academy Awards.

In the opening sequence, the film draws upon an aesthetic trope common in musicals: an aerial view of a rainy street, with people waltzing through with an array of colorful umbrellas. The audience can only assume the next scene will cater to a Singin’ in the Rain –esque performance, the formulaic introduction familiar in these films. But truly, this film is an anti-musical. Past this sequence, it lacks all the fantastical elements common of such. The dialogue is sung melodically, but there are no songs— no chorus to reference or tracks to download. There are no choreographed dance numbers or grandiose backdrops. In its place, there lies a somber energy and a mundane plot. 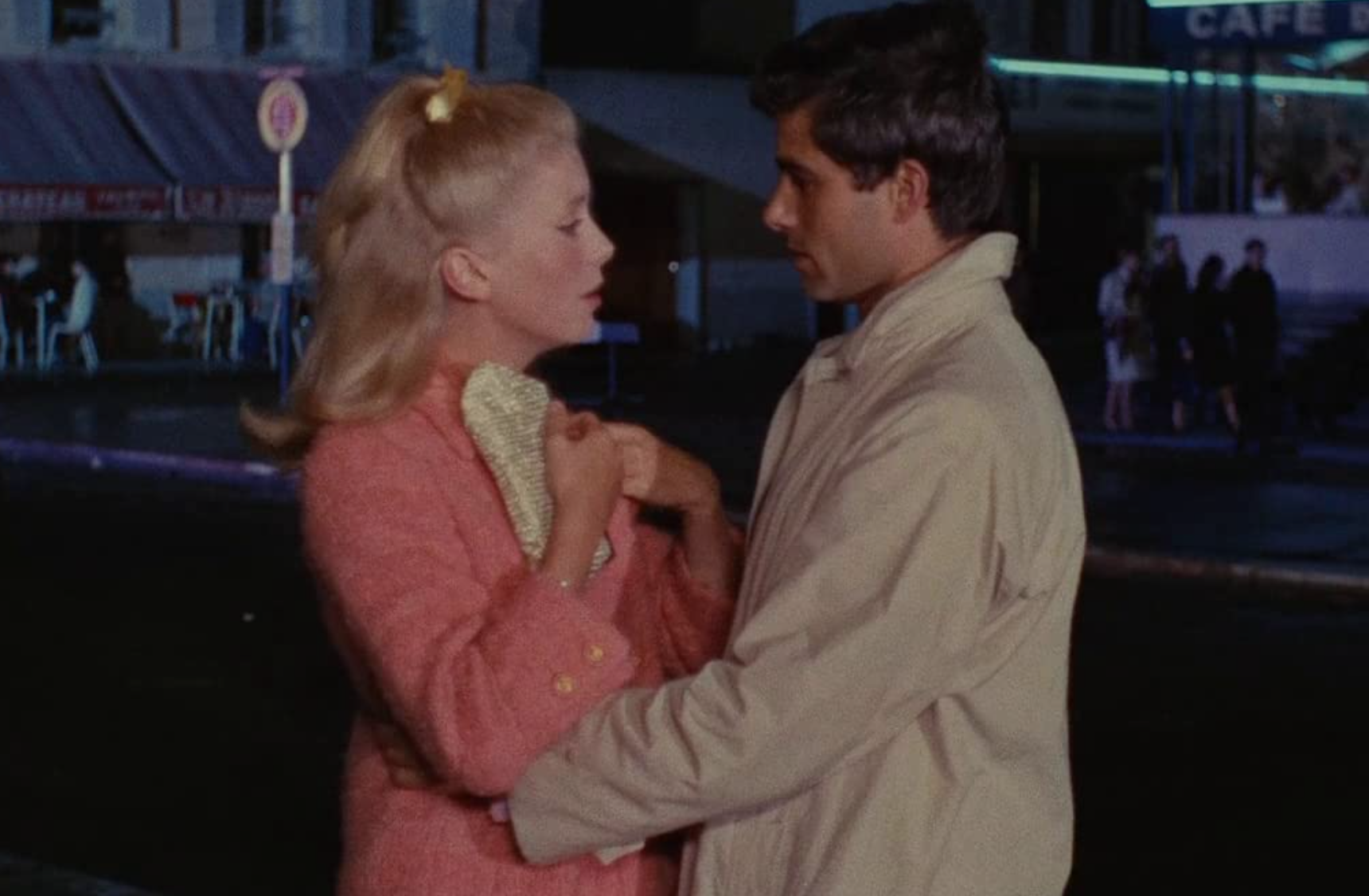 The Umbrellas of Cherbourg is a story told in three acts. The Departure, the Absence, and the Return: all centered around the male love interest Guy’s connection to the Algerian War. What begins as a picturesque love story, with the stunning Catherine Deneuve acting as seventeen year old Geneviève floating down the streets of Cherbourg in haze of young love, soon transforms into bittersweet reality. The story itself is far from revolutionary—a young couple fall in love despite a mother’s disapproval, only for the male protagonist to be sent off to war; A plot that precedes and succeeds this 60s film. But created in the midst of the French New Wave by auteur Jacques Demy, there lies something under the surface that is undeniably unique. Unlike most musicals, there is no sense of whimsicality; no ‘love conquers all’ or ‘all dreams come true’ proverb to take home. Instead, the film consists of pragmatic decisions and a subdued tone. 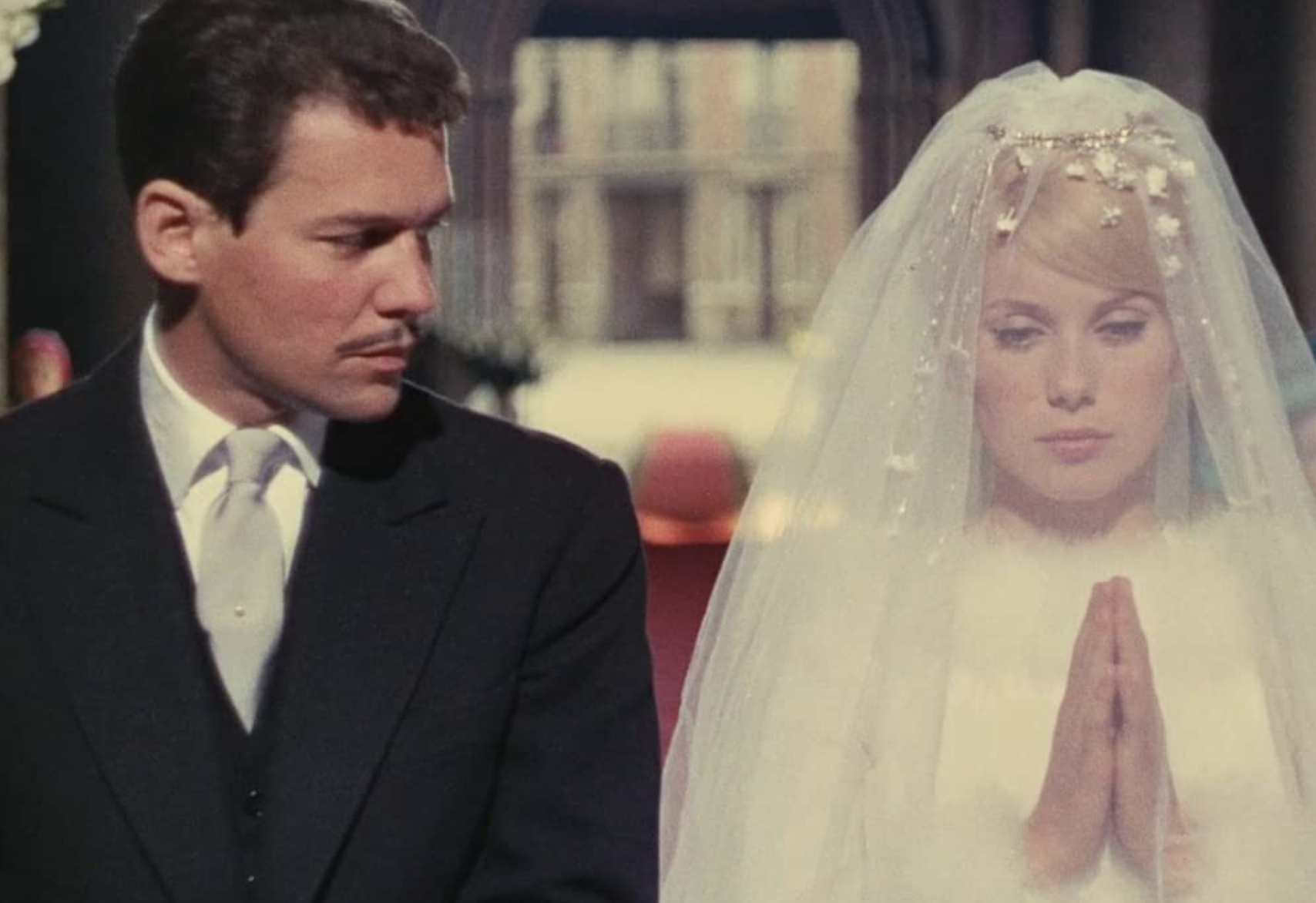 What I found so hypnotic about this film was the lack of dialogical depth. Frankly, there are no remarkable lines. The young couple is in love but we know this solely through their “I love you”s. There is no sense of connection beyond their gentle touches. When Guy is drafted, Geneviève is distraught and, as we soon find out, pregnant. But as her mother assures her, “People only die of love in the movies.” It will only be a few months before Geneviève accepts an engagement from the established Roland to help her raise her child. She does this with a quiet acceptance of her fate— there is no drama beyond her stoic features. When Guy returns from war, he spirals into self-destruction at this news, before finding happiness a short time later with his Godmother’s nurse, Madeleine. Again, the drama lies in the in-between. Guy acts out for a short time, an outburst at a bar, sleeping with a prostitute, but soon he marries Madeleine and they have a child of their own. In the film’s final scene, Geneviève and Guy reunite years later “…as fate would have it.” They are both older and their once passionate feelings are replaced with a quiet maturity. Geneviève asks Guy if he’s doing well, to which he replies, “Yes, very well.” And there it ends. So why did I cry? Maybe it’s because there’s something beautiful in the unsaid— Demy allows us to fill in the blanks, to learn or mourn between the lines and spaces. The tragedy of reality or possibly, the beauty in it.