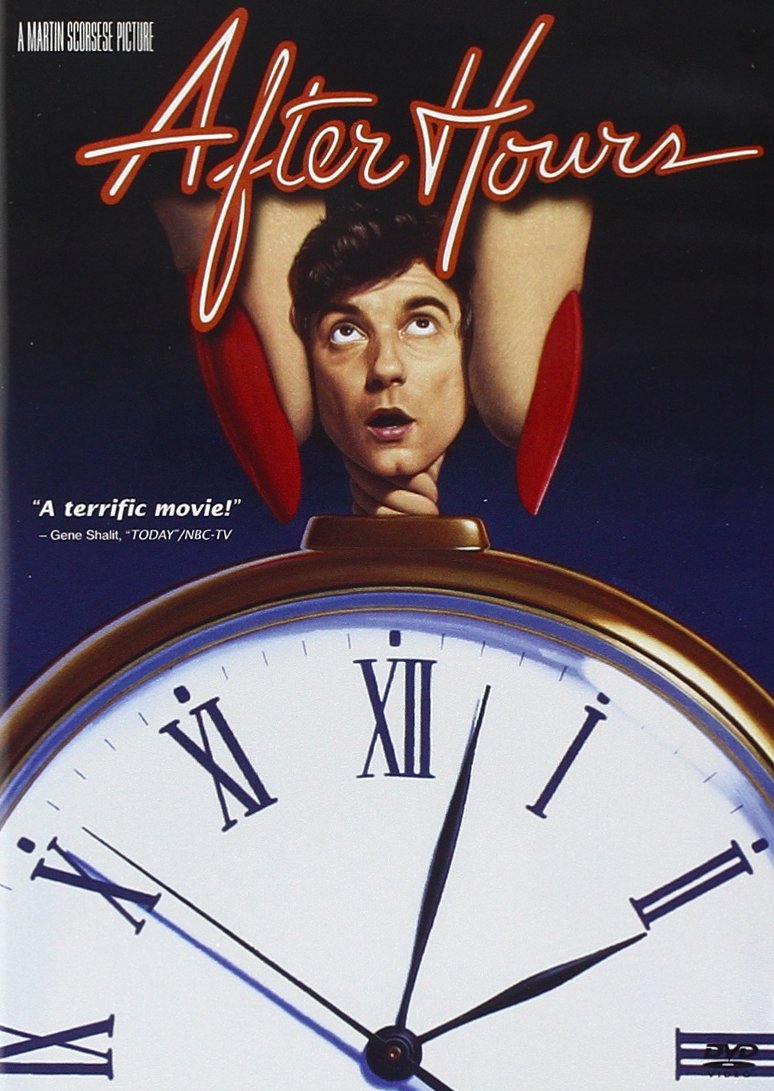 Who knew Martin Scorsese had such a comedic sensibility! I sure didn’t. After seeing this movie’s DVD case for years on the shelf at my hometown Family Video, I finally decided to watch it.

After Hours, a 1985 film directed by Martin Scorsese, is many things but not predictable. I have a strict preconceived notion about Scorsese and his movies, so this was a lovely gem I stumbled upon. This film proves he should do more comedies. In After Hours, we’re following our protagonist Paul Hackett (Griffin Dunne) on an evening that turns into quite a bit of a nightmare, especially since all he wants to do is go home and the whole city of New York is against him. With a different score, this movie could easily turn into a horror film.

This movie is purposefully confusing in the way that these characters are in familiar settings, but through the way they talk and form relationships, they’re everything but. They defy all of our expectations. Each character comfortably fits a list of traits that they uphold throughout the movie. Each person qualifies a role and propels the movie forward by bringing in a new wrench or layered problem. This movie doesn’t exist for character arcs, instead, it’s there to be a chain connecting all of these characters together. It’s the playground for Paul and all of the people he meets in the time frame of a night in New York. It feels like a dream in the way that things are recognizable, but conversations and events aren’t complete.

Paul is a cathartic protagonist in the way that he says yes to certain situations but you as the viewer doesn’t have to face any of the repercussions. He follows this charming yet strange woman, Marcy (Rosanna Arquette), and then ends up working on some paper mâché with her roommate. There are weird hints and easter eggs being planted with every word. Soon Paul is the main suspect in a murder and has an angry mob chasing him. He finds himself in dive bars, a punk club, diners, a phonebooth, art workspaces, taxis, and subway stations. In the end, he finds himself right where the movie started: at work where he has an uninteresting desk job, although now he’s covered in paper mâché.

He’s the perfect person to follow because he’s kind of bland and slightly dumb and doesn’t think many steps in the future. He acts instantly and without remorse but mostly has his heart in the right place.

One movie that came to mind when I first watched this was Napoleon Dynamite. After Hours, doesn’t feel like a modern comedy. Some of its absurdity feels close to Airplane! or Naked Gun, but with this Scorsese flick, they aren’t directed to the audience. The actors aren’t looking for the joke, they’re living it. With Napoleon Dynamite, the characters fulfill certain archetypes and communicate in a foreign way that creates a new world for both them and the viewer. In Napoleon Dynamite, there is a lack of awareness that they’re funny and this is just who they are unabashed. It isn’t slapstick, they’re just people. The things they say are blunt, without small talk. All of that is taken out, so we just see the things that drive the train forward, except it’s a train that’s upside down and on roller skates. Napoleon Dynamite was a really important movie for me growing up because it showed me a new way on how to be funny and what is funny. With Paul, there seems like moments that he might be aware of the absurdity, but others where he too exists in this limbo.

This movie woke me up and caught me by surprise. The intricate writing of having all of these characters satisfyingly intermingle and weave into one another is very difficult! This whole movie relies on crazy coincidences, and how one person just so happens to know another even though they live in a city with over 7 million people. But this movie feels easy to watch and jump on the trolly. There’s no way to know what’s going to happen next. Usually, uncertainty is something that gives me hives, but with this, there was a weird joy to it. I love being surprised and when a movie genuinely does that, it speaks to my soul. I haven’t been able to stop thinking about this movie since I saw it because it was so startling.

This film still has the crisp Scorsese sensibilities too. This movie is about people and relationships with emotions and feelings. This movie is all about connections at the very least, with some incredibly heavy moments amongst the humor. We get a lot of closeups of people’s faces and we feel the paranoia and tension along with Paul. And of course, it takes place in New York. And we get to see the non-touristy and typical areas of the city, many of its different subcultures are on display. We go where the locals go.

Marcy mentions The Wizard of Oz in the diner in relation to her ex-boyfriend’s love of the movie. Even though this just feels like another weird aside and tangent she creates, this movie does feel rather Wizard-of-Ozian. With all of the strange characters we meet, and time simultaneously feels very present but also non-existent. Specifically, with how the bar keeps opening and closing. And most of all, both Paul and Dorothy just want to get home, they’re desperate to and will do just about anything to escape this weird (although at times alluring and interesting world) to get there. Also, with his night being shepherded by three blonde women, it’s almost like they act as his twisted and less helpful versions of the Cowardly Lion, The Tin Man, and The Scarecrow. Or maybe more like the three ghosts in A Christmas Carol. Either way, they all introduce a variety of problems and complications for him, but nonetheless continue his night, making it longer and longer.

The casting is also incredible. With Cheech and Chong being the perfect criminals with an affinity for art, and Catherine O’Hara is perfect as Gail, a woman who drives an ice cream truck and turns on Paul quickly, organizing a mob of people after him. If this movie was made in 2020, David Tennant would mostly be cast as Paul (maybe I just think this because of their physical similarities). Also, I don’t know if it’s just because I just finished The Sopranos and I’m going through serious withdrawals, but I couldn’t help but think of Christopher Moltisanti whenever Paul was on the screen. So, maybe this is also why I loved this movie so much…that and I’m now obsessed with those Plaster of Paris bagel and cream cheese paperweights.

Even though this movie is odd and had me utterly confused, and anxious it still feels like a night on the town. Living in Chicago, I’ve had nights where they unfold in front of you. Sometimes a journey presents itself and it requires you to bop around the city, meeting people and hearing their stories. Or you find yourself randomly running into a good friend at the same tiny bar. Or your waiter just so happened to go to elementary school with your best friend. And because things are closer in an urban landscape, there’s just more space and chances for things to happen. There’s also an innate connection with the others around you. It’s just about whether or not you follow the opportunities, sometimes you do and sometimes you don’t. This movie made me miss these sprawling nights; those evenings where Chicago becomes a small town.