The Only Thing More Disappointing than Men… 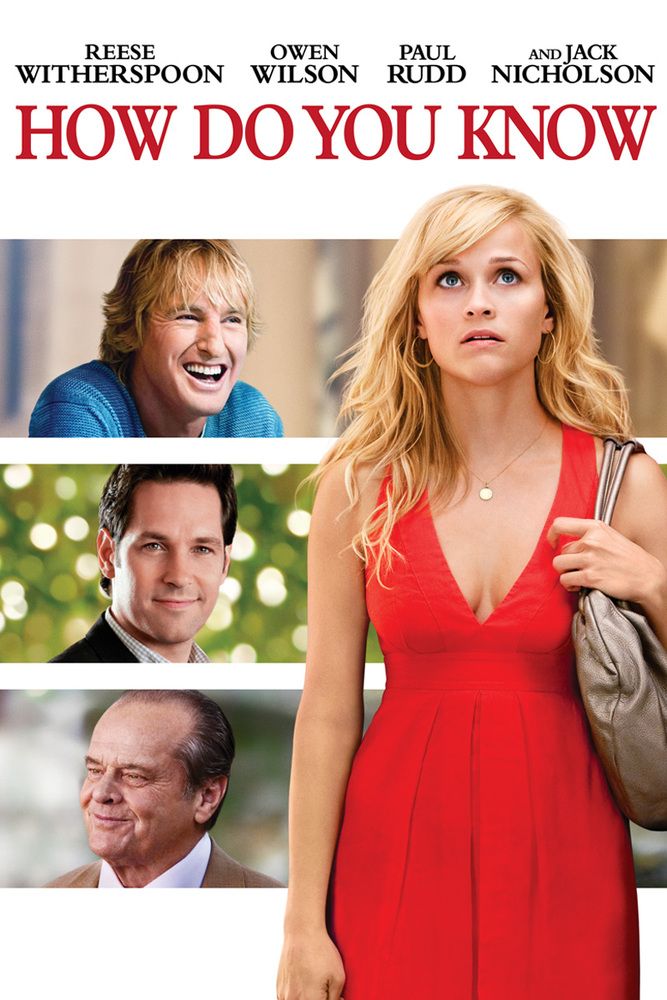 …Is how they portray women in movies.

With all this time to watch movies I’ve been catching up on my Rom-Coms. Unfortunately, I decided to watch 2010s How Do You Know. Let me just say: How Do You Know  is the most anti-feminist piece of blockbuster entertainment in the most recent decade.

Okay, fine, there are probably a lot of anti-feminist pieces of work, you got me there, but you can add this one to the list. The sad truth is rom-com media our mothers fed us is written largely by men. And How Do You Know is a PAINFUL representation of female through male gaze.

Let’s start with our leading lady, Lisa, played by Reese Witherspoon. The movie opens on young Lisa performing better at softball than her male teammate. Her teammate of course pushes her down. Reminiscent to the opening of He’s Just Not That Into You, it foreshadows a story about a strong womxn who’s not gonna take any shit from any man. Well think again. This movie is ACTUALLY about how men walk all over Lisa everyday of her life.

Flashforward to Lisa, the pro-athlete finding out she’s been cut from her softball team and needs to reassess her life situation. Okay so maybe this will be a story about a womxn changing her life now that everything’s gone down the shitter. Wrong again my fellow viewer. CAUTION: THIS IS NOT AN UPLIFTING STORY ABOUT HOW A WOMXN GETS HER LIFE BACK. This is a story about how a manic pixie dream girl can fix two men at once.
There is ONE conversation in this whole film where Lisa talks about her future life goals- a conversation that is immediately shut down by her romantic partner, played by Owen Wilson.

Not only does Witherspoon’s character lack any three dimensional traits, but the ONLY trait she does possess is talking herself out of being mad at the men in her life. After her first sexual encounter with Matty (Wilson) she is ushered to a bathroom full of fresh toothbrushes and complete velour track suits, in pink of course, to cater to the many women Wilson sleeps with. It’s like Charlie and the Freak Factory. In a fit of anger Lisa starts to leave. She immediately turns back around and apologizes. Saying, “Don’t judge anybody else until you check yourself out that way you are lucky if it’s your fault because then you can correct the situation.” To which Matty replies “If you’re really apologizing, you may be my dream girl.”

Let’s get some things straight. First, sis, what are you trying to say, ‘cause it sounds like you’re saying this is somehow your fault. Which is not a phrase we wanna be teaching the youth. Second, casual sex is cool, but it’s also totally cool to leave a situation in which you feel like you’re being treated like a sex doll. Don’t say sorry boo. Feel how you feel.

Throughout the rest of the movie Lisa relentlessly apologizes for most things she does. Basing her whole life on, I assume, softball quotes. Things like “When you’re in something you got to give it everything you have or else what are you doing?” I’ll tell you what you’re doing gurl, making bad choices romantically because you lost everything else.

Meanwhile the men’s conversations in Matty’s reality are everything you’d expect to hear at a frat house in the 1980s. After a short and un-insightful back and forth with his friends Matty realizes he’s in love in Lisa because he “uses a condom with the other girls”.

Even fan fav, Paul Rudd, lacks any dynamic understanding of a romantic partner. Rudd plays ultimate, sad boi George, the lawyer who has recently been dumped, run out of money, and is the target of a federal investigation (no thanks to his dad played by Jack Nicholson). George starts the movie off by calling Lisa to say he’s unavailable to date, that he’s already taken, and he doesn’t want her waiting around for him. As the movie progresses his life falls more and more apart. But instead of dealing with his own problems he puts all his focus on one aspect of his life-a girlfriend…because a girlfriend solves all problems. On their first date Rudd’s character shows up drunk, is completely belligerent and for some reason Lisa decides to stay. RED FLAG NUMBER ONE. GET OUT. But she doesn’t. Instead she becomes best friends with George. As the movie progresses George and Lisa grow closer and closer. George falling more in love.

In a final act of melodramatic action George says to his father that he’s going try one last time to get Lisa to fall in love with him. If she doesn’t he’ll take the fall for his dad and go to jail. BUT if Lisa even seems like she might, want to, maybe in the future, date him he won’t take the fall. Seems extreme. Maybe the choice to go to jail over something you didn’t do shouldn’t be based on if one lady wants to date you.

George lucks out when Lisa leaves Matty. Giving him a new outlook on life. He becomes changed man, ready for monogamy whenever it should come his way next. All it took was a woman to help him see. Not a therapist, not self-discovery, but a woman. Where would men be if they didn’t have women to lay all their insecurities on? How would they become better people if a woman couldn’t irrevocably change them?

By the end of this movie Lisa has gained nothing.

Sure, she got a busted scrub of a boyfriend and some college classes. But her life has not been made better by anything that happened in this movie and SHE’S THE MAIN CHARACTER.

This movie furthers the idea that woman need a relationship to be happy. At least in other rom-coms the ladies have jobs or get the job they wanted or a boyfriend who isn’t being investigated by the feds.

She has no growth nor did the writer care to give her any. Why even mention her career in sports, the loss of her spot on the team if it doesn’t affect the story at all. This was not a story about Lisa. Lisa was a prop. At best she was a plot device.

I highly recommend never watching it ever.