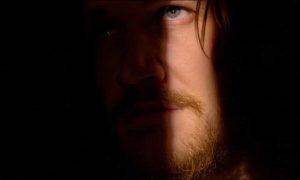 As a self-proclaimed inside kid, I can empathize with Bo Burnham in his latest special, INSIDE. I understand the comfort of indoors but also how suffocating it can be, even though I don’t want to be anywhere else. Inside can be so nice.

I don’t know the last time I’ve been so engrossed in a piece of media. I felt like I was under a trance, slowly succumbing to a batch of quicksand. It was incredible! INSIDE premiered on Netflix on May 30th, and there hasn’t been a day that has gone by that I haven’t thought about it, or hummed at least one of the songs under my breath.

I first discovered Bo Burnham in high school through his comedy special what. which was also on Netflix. From then I’ve consumed absolutely everything he’s done. This includes all of his other specials, his directorial debut with the wonderful film, Eighth Grade, his MTV television show Zach Stone is Gonna be Famous which I absolutely love. It unfortunately only got one season and is kind of difficult to find but I own it on DVD so if you want to watch it, just let me know and you can borrow it. To put it lightly, I’m a massive fan of his.

For those unfamiliar with Burnham’s work, he’s a comedian that got his start on YouTube by uploading provocatively comedic songs when he was in high school. His music has always circled around social and political commentary. I often feel like Bo is almost too aware for his own good. As if he somehow got access to the control room of this simulation we’re in, and he just has to continue on knowing how the strings are pulled. He’s constantly warning us of the doom of our world, and we keep coming back for more.

I usually wouldn’t review or talk about something like this in this way, but INSIDE completely busts out of anything that I would deem a “comedy special”. I’m not even sure what I would call it. It is funny, but it’s also sad and introspective. When he sings certain lines, it feels like you’re getting thrown into an ice bath and others it feels like the deepest thoughts in the crevices of your brain are uncovered for everyone to see. A shared shocking vulnerability between a performer and viewer. I feel like trying to decipher whether or not this is a comedy special is a rather binary way of looking at things. It lives on a spectrum that’s constantly being shaken and stirred and filtered through his twisted lens.

The whole special is written, directed, edited, and stars him. It was shot over the past year, in the guest house behind his home. This same location was where his previous special Make Happy that came out in 2016 ended. This is the only piece of pandemic content I want, and the only one I need. It reminded me of the hard days of quarantine, some of which I have forgotten because I have already started to romanticize the time of being stuck in my apartment. It perfectly encapsulates loneliness, anxiety, and depression without beating you over the head with it. It shows you the embodiment of them. I think the most evocative scene of this was when he was speaking into a microphone laying next to his head on a pillow, the rest of him wrapped up in a blanket. 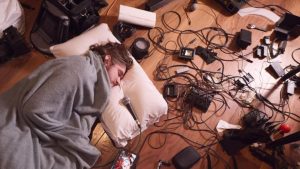 It feels simultaneously jarring but comforting since the whole special feels like he’s directly addressing the viewer, and he is obviously performing. There’s even an intermission! Everything is perfectly choreographed, this isn’t just a thrown-together livestream. Burnham is not a messy performer, he is meticulous with his details, like a painter working on a landscape, not a cloud out of place. Each song and segment of the piece has a specific set of lighting and camera angles. Each of them has its own particular point of view, with matching projections and inspirations.

INSIDE features many songs in a jarringly edited nature. All of which takes place in one room. We see some behind-the-scenes moments of Bo making the special. My main takeaway from the special is how vulnerable it is, and in many cases, I’m talking literally. Another is the immense DESPAIR, my friend Nicole and I lamented on this over many text messages, the caps lock included. It’s not uplifting or hopeful, but I kind of appreciated this. I think one of the reasons I latched onto Bo when I found him in high school was because he was a realist. He introduced me to so many new ideas about religion, and media, and how we interact with the world. Truly, I think he helped frame my socio-political views, and I know how cringey that is to say but it’s true! He’s a very important figure in my life, and I know I shouldn’t idolize celebrities especially since Burnham has sung about the dangers of that in the past, but I can’t help it.

In a world where there seems to be so much fluffy hope, I kind of like the groundedness of him. Yes, I felt distraught after finishing the special but his work has control over me. I haven’t truly felt something through a piece of media in a long time.

This is one of the reasons why this special feels so earth-shaking, is because he proposes these instances, usually of elements of our daily life, or at least something that happened to us last week and he leaves us with them. The screen then turns black and we’re forced to deal with it on our own.

“Could I interest you in everything all of the time?” he sings in a carnival-barker-esque song.

He has touched on the internet and its vast bank of knowledge in previous pieces, but again he hits home the point: we can know everything, and we shouldn’t be able to. Or at the very least, Bo doesn’t want to know everything and is making his stance known. “Everything” encapsulates too much for a human brain.

INSIDE requires knowledge of contemporary internet culture, because Burnham doesn’t provide context for the viewer. He gives you a specific instance and expands upon it. Bo especially dives into YouTube culture, which is where his career began. This whole special could be an homage to his start– a boy making songs in his room. That’s pretty much what INSIDE is, just with some fancy lights and a disco ball. He watches the video that went viral that started it all, projected on the wall as he grapples with turning 30 in the middle of a global pandemic. He’s now older and has grown but at his core: he knows how to write a witty song on a keyboard.

I don’t want to spoil much of the special and I’m not really sure how to talk about a lot of it in just a text format without any visuals. Also, I just want you to experience it with your own two eyes. INSIDE is not for everyone though, I must say. If you’re new to Bo, this might not be the place to start. It is incredibly dark and morose and doesn’t really give you any answers, just more questions. If you aren’t in a great mental state, I would maybe wait to watch this on another day.

Maybe it’s because I grew up in the age of the YA dystopian novel, but I would categorize his viewpoint as largely apocalyptic. And boy do I love the essential oil of dystopia. He has this particular song towards the end titled “Funny Feeling”, that I haven’t been able to stop thinking about. It gave me chills the first time I heard it. It’s a song on an acoustic guitar, with a faux-campfire light on him, but a forest projected by him. “There it is, again, that funny feeling.” He never describes the feeling as a whole, but as a viewer I understand. He lists an array of things, some that make more sense than others, but all capture the uncanny valley feeling of our lives. The uneasiness of the unpredictability of our humanity and how we really have such little control.

I wasn’t sure if we would ever get another special from Bo, especially since his last felt quite finite. But, this exceeded all of my expectations and I cannot wait to see what will emerge from his brain next. Who knew that we would get a special that resembled something more like a performance art piece? It’s the kind of work that leaves me inspired and draws me to my own notebook, to make something quite different, but to make nonetheless and for that, thank you, Bo.