Every aspiring writer has heard the words “write what you know” at some point, probably as early career advice from the more experienced of their kind who have already “made it.” So it’s no wonder so many writers, novice and legend alike, are shooting their shot with quarantine comedies, especially since nobody has any new experiences or wacky stories from a wild night out to draw on for plot twists and character inspiration. It’s also no surprise that right now, “what you know” is what we all know, and it has been rather tiresome from day one of lockdown to tune in to the usual method of escapism only to see our rather miserable current reality reiterated. 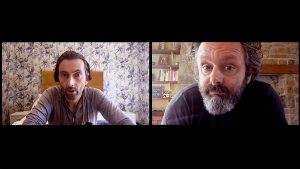 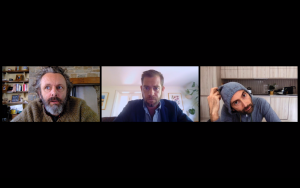 The British series Staged, starring Michael Sheen and David Tennant (or, David Tennant and Michael Sheen, depending on the day) as exaggerated versions of themselves, is a delightful dive into quarantine humor that doesn’t make me want to hurl my TV through a window. Series 1, which aired a few short months into the pandemic on June 10, 2020, follows the two famed actors as they and their director Simon Evans (the real-life creator of the mini-series, who also plays an exaggerated version of himself) try to rehearse a COVID-postponed play over Zoom. Though the depressing undertone of the series is that a huge majority of the creative community’s work has been adjourned indefinitely, you can tell that the bond David and Michael share is a very real one. And it is encouraging to watch their magic shine through from their screens to ours because it reminds us that those most essential relationships of ours that need to happen virtually for now are no less real than they were in 2019. 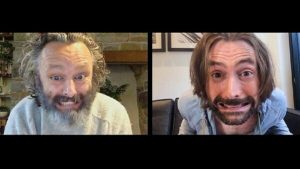 First and foremost, it is great fun for any of us mere mortals to see our heroes dealing with the same issues and struggles we are (and admittedly, I would classify both Tennant and Sheen as personal heroes of mine). But beyond that, Staged offers us an opportunity to relish in the collective misery of the world, and collective misery tends to be one of the things Britain handles best. Since the pandemic began, it’s been all too easy to feel we’re not productive enough or creative enough, regardless of the fact that an achievement in the realm of creativity or productivity is, for most of us in the world right now, impossible. David, Michael, and especially Simon pretend to be neither, nor do they bother to shy away from the very real mental health effects spreading across the globe nearly as quickly as COVID itself. 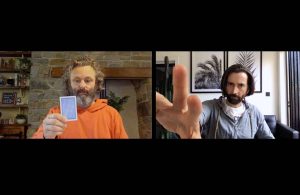 As I mentioned in an earlier post, I’ve been searching for a feel-good something or other to watch since I first learned about Ted Lasso. Never once did I imagine I’d find it in a show about lockdown living, but Staged offers no-strings-attached laughter and surprisingly heartwarming moments between two people who share a deep love for each other, despite any pandemic-influenced difficulties. Though it might as well have been yesterday that the duo first introduced their cabin fever Zoom bantering to our Hulu dot com accounts, Staged dropped a second series via BBC One the better part of a full year later, on January 4, 2021 – which, thankfully, will be available in the US on March 16 of this year. I could watch this brilliantly concocted comedy endlessly, and I highly recommend you do as well.

Turns out, sometimes the best way to escape your own misery is simply to enjoy someone else’s.