Like many movie lovers, I’ve enjoyed Roman Holiday and To Kill a Mockingbird ‒ two of Gregory Peck’s more popular movies, which made me a fan of this prolific actor.  In The Omen (1976), Peck’s character is the American Ambassador Robert Thorn, whose newborn son dies during childbirth.  Perhaps one reason Gregory Peck does such a fine job with this character is because it reflected the actor’s personal life ‒ months before filming The Omen, Gregory Peck’s son shot himself, making the actor himself someone grappling with the death of a child, just like his character Robert Thorn.

A very big part of why The Omen is great has to do with Peck being at the core of the movie’s production and filming.  Producer Harvey Bernhard claimed Peck was the choice to portray Thorn from the beginning, and my impression has always been that Thorn was made for and molded to Peck – not the other way around of Peck growing into a character.

The American Film Institute ranks Gregory Peck as #12 on their list of Greatest Male Stars of Classic Hollywood.  (A reliable list, except that the Institute ranks amazing Gene Kelly at #15, which is a minor crime.  Kelly could be bumped higher, but I digress…)  In The Omen, Gregory Peck is not only perfect for his character Thorn, but he is flawless on location in Italy.  Midway through the film, our main character Thorn is in Italy seeking the birth records of his adopted son Damien, and Robert Thorn speaks Italian with a Roman cabbie and the hospital staff.  Gregory Peck carries the Italian dialogue perfectly, effortlessly!  It’s a short scene but it’s a great scene, so well done ‒ largely because of Peck.

In general, the entire casting was solid.  The child actor Harvey Spencer Stephens performed the other main role of the antagonist and the Antichrist Damien Thorn, who is Robert Thorn’s evil adopted son.  Father Spiletto, the Italian priest and a secret disciple of Satan who offers the child to Thorn, is played by Martin Benson.  A young shaggy David Warner briefly brings to life the journalist Keith Jenning.  Except for Gregory Peck, all these actors mentioned here are British.

The problem facing most of the characters ‒ Robert Thorn, the journalist Jenning, those who aren’t disciples of Satan  ‒ is how to stop Damien from growing up and taking over the world.  Because starting on his 5th birthday, Damien and his disciples begin to orchestrate mysterious events that lead to violent deaths, including the death of his adopted parents.

In the end, The Omen doubly succeeds beyond Gregory Peck and his castmates as a bloody good horror film.  Despite a slow beginning and a few snoozy parts in the middle, The Omen is worth watching to the end when we get to see a really exciting and suspenseful fight that is the film’s culmination and my favorite part of this movie:  Robert Thorn and journalist Keith Jennings find themselves in an abandoned and decrepit cemetery, fighting a pack of hounds from hell! 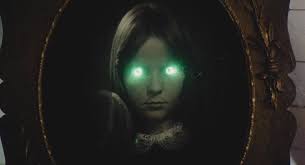 Cathy’s Curse is a fluffy ‒  and hilarious ‒ canuxploitation horror movie.  This supernatural film is so terrible that it’s good; sort of like The Room is celebrated for being so awful that it attracts large midnight audiences.

Cathy’s Curse was directed by Eddy Matalon.  This film was produced by Matalon and Nicole Boisvert.  There isn’t much info available on Boisvert, except that her surname suggests she might be French and that she and Matalon made a drama released a year after Cathy’s Curse. Now ‒ Matalon and Boisvert are new filmmaking figures to me but, for Cathy fans, Eddy Matalon is myth and his movie is legend.  Cathy fans refer to the Curse as the Canadian Exorcist, and in Canada, it was initially released under the French title Cauchemares which translates to “nightmares.”

Both The Omen and Cathy’s Curse challenged the 1970s ideology that a “good” mother keeps cheery, full-time custody of her young child.  Cathy’s Curse begins after Cathy’s mother suffers a nervous breakdown, which keeps her mother occasionally confined to resting in bed.  Cathy’s mother briefly enters an in-patient program, and upon returning home from the hospital, Cathy asks her parents “Is mummy sick again?”  The mom responds by whimpering to her husband, “George – please believe me, [Cathy] needs our help.”  Then Cathy’s father carries the fainted mom back upstairs to their bedroom, as Cathy remains alone on the stairwell, continuing to pout and watching her parents leave her again.

Second to little Cathy being possessed by her dead aunt and a demon doll, unsuccessful mothering is another crisis in Cathy’s Curse.  Viewers frequently see conflicts between Cathy and her sick mother.  For example, toward the end of the film, Cathy’s mom is trying to cradle Cathy, when Cathy reacts by scratching her mom’s face.  The mother screams that Cathy did it on purpose, when the father protectively grabs his evil daughter from her mom’s arms.  Meanwhile, the mom continues to shout that he “didn’t see the look on [Cathy’s] face!”  The father reprimands the mother – not Cathy – that enough is enough, to calm down.  Like in The Omen, this father figure protects the child and not his wife/co-parent.

In The Omen and Cathy’s Curse, the moms are not wrong.  The mothers are spot on that something is wrong with their kids and evil is destroying their families.  Cathy’s curse is ultimately broken by her mom.  Once back to normal, Cathy’s first word is “Mommy…”  The film ends with the spell undone, Cathy’s family gazing and smiling at each other, reunited.