The Music Box: My True Love 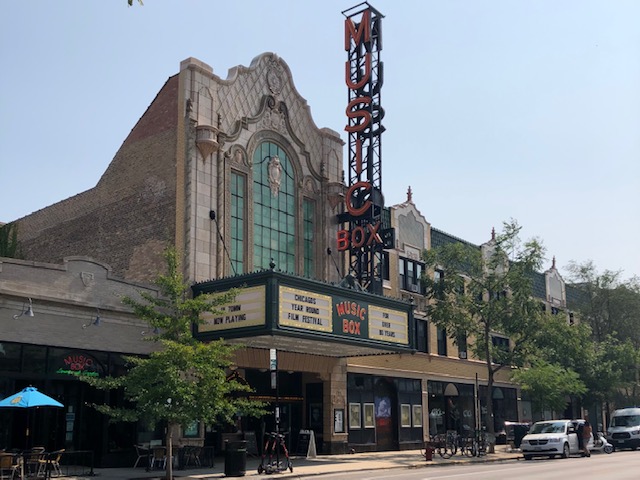 The Music Box Theater is the number one space in Chicago for cinephiles.

You cannot change my mind.

They say when you know, you know.

The first time I went to the Music Box was October of my freshman year at DePaul. My friend invited me to see The Rocky Horror Picture Show. I had never seen the movie; I had no idea why we were dressing up. Nonetheless I went, dressed in what was pretty much my sexy Mad Hatter costume from a few years before, minus the hat.

As we made our way down Southport some time close to midnight, I could see big beautiful red letters in the distance. With each step they became more clear and I became more excited. I had never seen a sign that looked like that. The “M” poked out on top of buildings and trees- it caught my eye immediately. It was like that feeling you get when you see someone hot.  I could see the “U” of the red lettering and it gave me butterflies in my tummy. The “S” emerged; I was weak in the knees . The “I” appeared as my breathing shallowed . Finally the “C” came into view.

Think about your first kiss (the first good one) that’s what I was feeling. The big red letters sat on top of the marquee, like magic holding it above the sidewalk, backed by a face of extraordinary architecture. On the marquee were titles of films playing that week. They were individual letters, the kind that someone has to arrange and craft by hand to form words. It wasn’t a screen that looked vintage, or a screen that looked modern. It wasn’t a computer that made those words, it was (and still is) a person who made those words.

Under the sparkling lights were posters, physical not electronic, inside cases that require keys to be opened. A wall of glass doors holding a trove of enchantment behind them. In the middle, pulling focus: the old ticket taking booth. I could hardly go inside. I could have spent the whole night looking at the Music Box. Just looking.

It was as grand inside, as it was outside. Rich fabric lined the furniture in the bar. Gold accents pulled the eye up to dangling light fixtures glowing, hitting the walls like ghosts of movies past. Picture frames filled with old newspaper ads for showtimes, double features or festivals from years before. It was as if time had stood still- it’s me and the Music box then, now, in the future.

Making my way into the Big Theater I found myself surrounded by people in the same five costumes. I clearly hadn’t gotten the memo of how to dress.

I was unprepared for The Rocky Horror Picture Show. I couldn’t figure out why everyone around me was shouting or what was happening in the movie. I was confused most of the film, but I didn’t mind. I felt excited. I let my eyes run free throughout the theatre. SO MANY red velvet seats. I had never seen this many seats in a theater. Walls draped in the same red velvet. Balconies fit for a phantom. A blue ceiling that captured the beauty of the night sky. I was surrounded by wonder and friends.

I bet you can remember the moments you realized you were in love. Those moments where the lyrics “home is wherever I’m with you” finally rang true. Those small things that now seem so meaningful.

For my 20th birthday I made my friends come with me to The Music Box to see Babe Pig in the City II in 70mm. I didn’t even know what 70mm meant, I’m pretty sure I kept calling it 75mm.

When I went on a double date to see Dunkirk  in 70mm. I fought with my boyfriend before the movie and after the movie. I felt terrible EXCEPT when I was seated in that red, worn, lux, fabric.

When that boyfriend and I broke up, I saw Baby Driver (in 35 mm) with a friend. It held my break up pain at bay. The Music Box was there for me.

The first movie I saw in the Small Theater of the Music Box was Loving Vincent. I didn’t even know there was a small theater. To be honest I was a little pissed I didn’t get to sit in my usual seat in the big theater. I almost left. However, I heard the movie was really good; I figured it was nothing a PBR and some fresh popcorn couldn’t fix, so I stayed. I learned to love the pieces of the Music Box I didn’t know about. The small theater became another factor in my obsession.

For a long while nothing made me feel good, or happy, or like myself other than being at the Music Box. It was there for me when I needed it most.

I would go there to feel. Something. Anything.

I saw Marriage Story and I cried. I cried so loudly everyone in the small theatre heard me.

I was in awe during RoboCop.

I cried when I saw Little Women. I cried because it was so beautiful and as I sobbed, my trusty, squeaky red seat held me tightly.

When I saw Rent-a-Pal I laughed harder than I had in years.

I go there to experience life, in times and places I never knew were in my reach.

At the Music Box, I get to live through the 80s. Or feel like a young woman in the 40s obsessed with Noir films. I can be the inner punk kid who loves horror films! Watching movie after movie in preparation for Halloween.

The Music Box  is the Room of Requirement! Whatever I need it provides just like magic.

I have gone to see a movie, said to myself, “I wish I had brought a friend” then turned around to find two co-workers going to see the same movie.

I have asked for alone time and found the big theater socially distanced before it was cool.

I have said to myself “ooo I probably shouldn’t spend any extra money today”. AND WAS BLESSED BY THE MOVIE GODS: The computer system went down and I got to see my movie for free!

The Music Box is IT. It is films from your childhood. It’s foreign queer films. It’s movies you’ve never heard of. It is an excuse to be out of the house. A reason to feel good. It’s entertainment and education.  It’s Good smells. Good vibes. Living room, bar, and experience. It is your counselor, your mother, your lover.

So please, go to the Music Box and experience it. Throw every penny you have their way. It is not just a movie theater, it’s a way of life!

P.S The Music Box has tons of ways to stay safe while enjoying their films including their Virtual Cinema, Garden Movies, Socially Distanced Guidelines for indoor viewing, and Music Box of Horrors at the Drive-In starting October 1st!

*CFS will be covering the “Music Box of Horrors” throughout October.

please note: Babe Pig in the City was incorrectly identified as a 70mm film, it was a 35mm film.