B.J.’s Quickies | “The Inglorious Bastards” (not the one you’re thinking of) 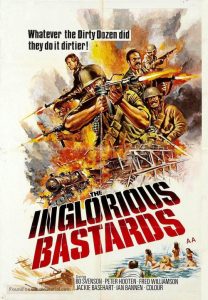 Yesterday I watched “The Inglorious Bastards,” the 1978 “spaghetti WW2” film that Tarantino stole the name from for his own 2009 epic. It stars Bo Svenson and Fred Williamson, who was the actual reason I looked up this movie to begin with – I wanted his mug for my Wall of Fame, and the only other movies I knew he was in were “From Dusk Til Dawn” and the schlocky early 80s actioner “Warrior of the Lost World” (MST3k version).

Anyway, “Inglorious Bastards” is about a rag-tag (aren’t they always?) group of American GIs who have been arrested for various offenses. They’re on their way to their courts-martial when they escape, meet up with a pilot who has crash-landed, and end up falling in with a Colonel on a secret mission to disarm a Nazi V-2 rocket.

Honestly, I had a hard time getting into this movie, in fact I didn’t watch it in one sitting. The characters are distinct but under-developed, the action slapsticky and poorly blocked, and the story is way too dependent on coincidence and miscommunication to be believable. Oh, and these guys never, ever, ever run out of ammo or have to reload. And of course there’s a scene of ridiculously-contrived gratuitous nudity, and to top it all off, The Good Guy Gets The Girl In The End(TM).

I suppose if you’re in the mood for a never-too-serious war movie to have on in the background, it’ll suffice. Grade: C-