Watercooler Reviews | “The Falcon and the Winter Soldier” Round Table: Finale, “One World, One People”

NOTE: This article contains spoilers. Also, when “Captain America,” is discussed below, Sam Wilson is the character being referred to.

After six episodes that somehow felt like ten, we’ve finally arrived at the finale of The Falcon and the Winter Soldier. It wasted no time in getting straight down to business: we open right in the middle of last week’s action, with Captain America, Bucky, and the surprise booster backup of Sharon Carter teaming up to put an end to Karli and the Flag Smashers’ destructive plot to stop the GRC vote and put its members in their place (read: their graves). Oddly, the action here bored me. I stopped caring whether or not Karli would win when it became clear she was going to end up with the title of Big Bad after all, and the wishy-washiness there throughout the series left no interest for me regarding how the final battle would go down. Even Karli’s death felt rushed and off. It should have at the least carried the sadness of a “hero” making the wrong call. Or, at the most, the fury of watching the American government once again all too eagerly choose murder of the underprivileged as the quickest and easiest endgame (For those of you countering my point here by pointing out Sharon Carter’s shady intentions from the post-credits scene: we’ll get there, but at this point in the episode we didn’t know whose side she was fully or even  partially on, even with her self-reveal as the Power Broker minutes before). But it didn’t. It was more heartbreaking to watch Karli’s rage and pain conveyed through her furious “fight me!” to Captain America, and despair when he wouldn’t. That moment, though, was a fleeting one.

I’d also like to know how John Walker got his Cap suit and shield back, but I’m assuming his BFF Not-Val procured it for him somehow. I could have done without any sort of redemption angle for him, even the small moment that showed him forced to choose between vengeance for his friend and partner, Lemar, and saving the lives of civilians on a bus. Of course, he chooses the civilians, and though he fails even with the super-soldier serum running through his veins, Marvel really did not need to go out of their way to show that he’s Actually A Good Guy™️ deep down. And Bucky, during all this, is trying to fight off as many Flag Smashers as his one vibranium arm will allow – he’s holding his own, but not enough to be of any real help to anyone besides keeping their adversaries distracted, which makes for simply okay television. 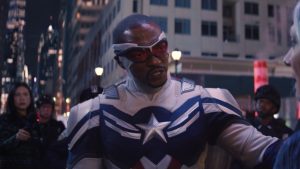 It’s Captain America, of course, the real one, that saves the day in the end on pretty much all fronts, his failure to save Karli notwithstanding. Elongated battle scene aside, the episode sufficiently captured my attention. The best speech Captain America has given, the one with more meaning, inspirational momentum and sheer magnitude of significance than anything that Steve Rogers ever produced, occurred at the end of it all when Sam openly chastised the GRC members for continuing with their plan to push their vote through, and openly confronted white privilege as he spoke about what it really means to personify America as a Black man:

“I’m a Black man carrying the stars and stripes. What don’t I understand? Every time I pick this thing up, I know there are millions of people out there who are going to hate me for it. Even now, here. I feel it. The stares. The judgement. And there’s nothing I can do to change it. And I’m still here. No super serum. No blonde hair or blue eyes. The only power I have is that I believe we can do better.”

And for all those that zeroed in on the “no power” part, are we forgetting Tony Stark didn’t have any inherently either? Because I didn’t see anybody questioning that. 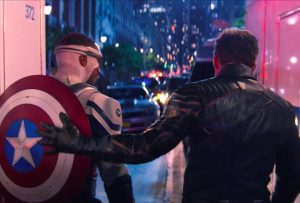 As we continued through the episode to the “post-massive battle loose ends” portion of the Marvel formula, it unfortunately became clear we still haven’t seen the last of John Walker, who under Valentina’s tutelage seems to be turning into a Big Bad himself – just a bit later down the line than I had anticipated from the start. And Valentina herself is no powerless force to be reckoned with. She is certainly more interesting and less anger-inducing to see onscreen than John himself, so I kinda hope we see more of her than of him. I’m not optimistic yet, though. I doubt either of them will appear in Loki, so it might be a while before we get any closure there. 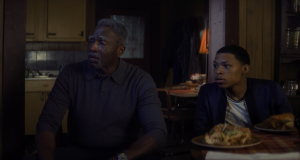 Two characters that have been along for the ride for far too long, though, received closure from Bucky and Sam respectively in the most satisfying ways. Bucky finally admits his guilt to Yori, whose son the Winter Soldier had murdered under the influence of HYDRA. And Isaiah Bradley received a visit from Captain America himself, who came to him with the line “We built this country. Bled for it. I’m not gonna let anyone tell me I can’t fight for it,” and then took him to the latest installation at the museum dedicated to the history of Captain America, which focused on depicting the honest account of Isaiah’s story. This scene, admittedly, brought tears to my eyes. I was skeptical in the beginning of both the show and the episode, but turns out Marvel did a nice job, and we ended on an uplifting note as the Wilsons decide not only to keep their family vessel, but turn it into America’s Next Top Party Boat for their closest friends and family. A lovely, heartwarming moment to go out on. 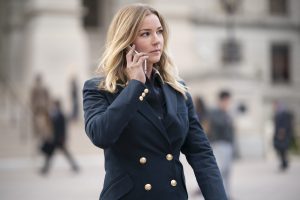 It wouldn’t be a Marvel series without a post-credits scene, and this is no exception. Sharon Carter, back to tease us with a dangling storyline after killing her most recent protege, has received a full pardon and an offer for her old job from the American government, which she seems happy enough to accept. On her way out of the building, however, her resentment has apparently not withered; she’s in full Power Broker mode and offering to sell American secrets to the highest bidder. Sharon certainly shares Peggy’s level of skill and sheer toughness, but utilizes it in a… different way.

There’s certainly plenty here to keep us occupied well into the next phase of Marvel series and films alike. Now, on to Loki…

I’ll see you in June.