Watercooler Reviews | “The Falcon and the Winter Soldier” Round Table: Episode 5, “Truth”

It’s that time of the week again. Let’s do this. 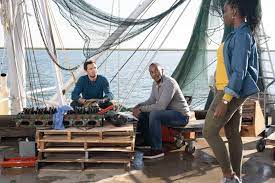 Though still not to the extent of WandaVision, I’m officially fully invested in The Falcon and the Winter Soldier by this point. Things have picked up, I’ve decided which characters I find interesting (Sam, Karli, Sarah, Isaiah, Ayo, Valentina) and which I don’t (Bucky, John, Zemo), and we’re racing along to what will surely be a shocking series finale come the 23rd of April. This week, we saw Marvel focus more deeply on Sam and his family as they fixed up the boat with the help of their childhood community, and this transformative experience, paired with a sincere encounter with Isaiah, helps him reflect on how his role in the world as a Black man has shaped his worldview. Concurrently, we saw John Walker deal with the consequences of his actions in episode 4, and though I’m sure his misery will be short-lived, I found it just delightful.

I admit, it’s taken me a little bit longer to write this review, because I’ve been mulling over how I feel about episode five and I’m still not entirely sure whether or not I’m on board. Given my previous comments on the show and the issues I tend to focus on no matter what I’m reviewing, most of you could probably predict the moment that quickly caught my eye on Friday, and you’d be right: Isaiah Bradley. Carl Lumbly, who plays Isaiah, conveys generations of pain with his line “they will never let a Black man be Captain America. And no self-respecting Black man should ever want to be.” This is the moment I’ve been waiting for since episode one, and for a second, just a second, I believed it was the point Marvel would choose to drive home. Even Bucky, one of the most self-absorbed and manpain-inflicted characters in the MCU, seemed to have a realization of his own, telling Sam, “When Steve first told me what he was planning, I don’t think either of us realized what it meant for a Black man to be handed that shield. I owe you an apology.” Tl;dr, we finally have an acknowledgment from a major franchise that the idea that America has ever been truly committed to an improvement in the quality of life of Black people is a myth. (Even the abolition of slavery had much to do with white politics and policies between the Northern and Southern states, but let’s get on with our review, shall we?) 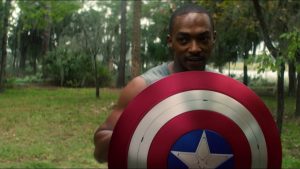 The disappointing blade of this double-edged sword hit when, moments later, Sam decided to defy the odds and train himself to become the new new Captain America, without the support of the American government or anyone else. I call this a double-edged sword for two reasons: on the upside, the significance of a Black personification of America is huge, especially for Black children everywhere who now have a mainstream superhero that looks like them. On the downside, Sam is going into this already at a disadvantage: he has no powers even relatively akin to Steve’s, and now is no longer even a match for John Walker, who as we know from last week dosed himself up with the last vial of super soldier serum. This hammers home the point that Black people have to work twice as hard for twice as long (look, for example, at how long it took Sam to prove to himself that he was worthy of the shield while John simply took advantage of it) to achieve that of their white counterparts. The second issue here is that Sam’s determination to take on the Captain America title as was originally intended provides an excuse for the majority of non-POC self-identified Democrats to once again fool themselves into thinking that yes, America is a country that fights for freedom and equality for all, that anything is possible as long as you work hard enough. This is the same line of thinking that has had most of us living in blissful oblivion for years, and it is dangerous as it allows us to become passive when progress is within reach. All that said, I do think Marvel made the right move in acknowledging the key plot points of American history relative to systemic injustice. It would be a disservice not to provide food for thought here on both ends. 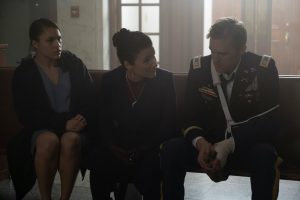 Also, how dare you bring in Julia Louis-Dreyfus to guilt me into feeling anything for John Walker, Marvel gods?! Though I have a feeling I’m going to despise what Dreyfus’s character, Valentina Allegra de la Fontaine, stands for as I despise John himself, not one among us can deny her brilliance in any role. She even turns some relatively cringeworthy writing into an enjoyable tease of her character, and despite myself I’m excited to see more of her. Val(entina) made the point I’d been thinking of for most of the episode, which was that John’s bosses couldn’t possibly be actually angry with him for killing a Flag Smasher – no doubt they would have done it themselves, had they not had an image to uphold. John’s bitter “You made me,” furiously muttered during his trial, is one of his only decent lines in the show to date – he is, for once, correct, and how very appropriate of the MCU to call out the hypocrisy of the American government from the mouth of one of its devotees. Very well done.

I’m really looking forward to seeing what goes down this Friday as we gear up for episode six, the series finale. Whether or not John will make a comeback (please no), whether or not we see Sam rise up as the successful new Cap (I hope so), whether or not Bucky ignores Sam’s demand not to flirt with Sarah – one thing is certain: there will be a lot to write about.