Watercooler Reviews | “The Falcon and the Winter Soldier” Round Table: Episode 4, “The Whole World Is Watching”

“Very little, if anything, of our loss and our shame.” 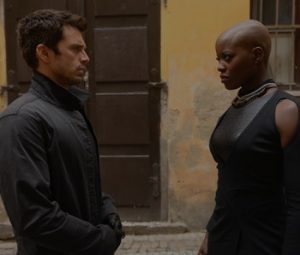 God, I missed Ayo. The Whole World Is Watching, the fourth installment of the six-episode The Falcon and the Winter Soldier, hit us with this exchange in the first five minutes, and I was very pleased to see Ayo and Bucky’s confrontation set the stage for the rest of the episode from both a plot and perspective angle. It reminded me, first and foremost, why Bucky has always rubbed me the wrong way: through all the layers of self hatred, he’s a self-apologist in the way all white-privileged people are programmed to be. He doesn’t want to be told he’s wrong, and he shrugs off criticism with arrogance and sarcasm. It doesn’t work for me. What did work for me, however, was the fierce disappointment Ayo conveyed for Bucky with a single glance – a condemnation only capable of those who understand eons of shared suffering, and to watch Bucky play it off like it was nothing prompted the first of many swells of anger I felt rise up in me over the course of the episode.

Now, a lot went down this week. Let’s break it down by event, from most badass to least badass. Following this hierarchy, we again move quickly to Ayo handing John Walker’s ass to him, pardon my French. I ate up every bit of Wakanda thrown into this episode. Every. Single. Minute. And is it just me, or was John particularly whiney this week? I almost threw up when, after his utter, complete and deserved humiliation at the hands of the Dora Milaje, he looked up at his friend, partner and confidant, and said, “they weren’t even Super Soldiers.” And you’re not Captain America. Get over yourself.

I’m interested to see where the Wakanda storyline takes our main characters, given that Ayo & co. are after Zemo and Zemo & co. are after Karli. I wanted to roll my eyes when Sam explained that he could simply talk Karli out of her vigilante justice ways for a more muted method of change, but their conversation was surprisingly un-cringeworthy. Until, of course, John’s Feelings of Inadequacy™ kicked in and he quite literally ruined the moment. It never mattered if Sam would have been successful or not; America is historically impatient, and thus there was never another choice for its personification to jump the gun on peaceful negotiation. After the chaos that followed Karli’s realization that she’d been played – however unintentionally – by Sam, we came to a bit of a crossroads moment during which I genuinely believed, for a split second,  that Zemo would steal a vial of Super Soldier serum for himself and run. The result, even though we were compensated with a satisfying scene of Zemo stomping the vials into smithereens like Whack-a-Moles, was far worse. Of course John Walker would find the sole remaining 2 ounces of Super Soldier serum, and of course he would inject himself with it, believing himself to be a Good Guy™ at his core, and what did an illegal scientific experiment or two ever do to a couple of Good Guys?

This plays into my theory that the true Big Bad of this series will be John, not Karli. Especially as Karli and Sam seem to have an understanding of each other, reinforced by Sarah Wilson’s phone conversation with Karli, which featured the absolutely brilliant line, “My world doesn’t matter to America, so why should I care about its mascot?” And then, of course, at the end of the episode we witness the death of Lemar, the right-hand man and closest friend to the new Cap. Understandably, this sends John into an absolute rage, and he savagely murders a Flag Smasher in retaliation, which unfortunately for him is captured on the iPhones of at least fifteen or twenty witnesses.

I’ve seen some reviews discuss the tragedy of John’s actions here as a result of the PTSD he likely experiences from his time in the military, most notably “the worst day of his entire life” and horrible actions he had to take that never “felt right.” I will make no such excuses or explanations for him. This is the turning point I’ve been expecting of the character since the pilot, but what really irks me is that it came at the expense of another character, and all of a sudden Marvel has played into the trope of a Black man’s death serving as the White Savior’s motivation. I was not particularly fond of Lemar’s character, but perhaps that was because, as Sam was for Steve for so long, Marvel never really bothered to establish him as a formidable force in his own right. He’s been second best to John for three episodes, but that he was killed off as such and will now likely be a reminder of the inequality complex that plagues Hollywood for the remaining two episodes… that’s really disappointing. I’d had high hopes given Sam’s sympathy for Karli’s motivations and his insistence that she was different from other villains the Avengers had faced. It pointed out that, as Ayo’s scene with Bucky did at the very start, there’s a colossal sense of shared suffering among Black people that White people will never fully grasp, and I’d so wished this was an intentional move on the part of Marvel to inspire their audience to do more subconscious self-reflection. Alas, at the end of the day, that was not to be.

All that said, The Whole World Is Watching was a massive turnaround from last week’s episode, and things are really starting to pick up. I was on an emotional roller coaster for the entirety of the forty-six minutes I watched, and the series finally seems to have established a path. Overall, this episode was an enormous improvement.