Watercooler Reviews | “The Falcon and the Winter Soldier” Round Table: Episode 3, “Power Broker”

The third installment of Marvel’s The Falcon and the Winter Soldier dropped on Friday, April 2. Part of me wishes it had been dropped on the 1st and been followed with a good old fashioned “April Fools’!” from the (super)powers that be, but sadly that was not the case. Needless to say, I was disappointed this week.

I’ve held out with some high hopes thus far, and while it seems Marvel is in fact hinting at painting John Walker’s Captain America as the actual Problematic Character™ (which is something I was hoping for in last week’s review), the show’s creators simply do not seem to be having as much fun with this series as they did with WandaVision. Surprising, given the extraordinarily heavy content the WandaVision team had on its plate going in to the series. Perhaps, though, it is unfair to compare the two. I credit this lackluster shine of The Falcon and the Winter Soldier‘s mostly to the fact that Marvel simply did not give enough thought to Bucky and Sam as independent human beings outside of Steve’s storyline. They have now bitten off more than they can chew: finally acknowledging Sam as a Black man in the world and his struggles as such, trying to grant adequate awareness (read: screen time) to the state of Bucky’s mental health, allowing the “villains” to make a very real, human point, and folding it all into one neat little limited series plotline. Nobody can argue that the show doesn’t make sense, but it feels calculated, without the heart we’ve all come to expect and anticipate from Marvel. 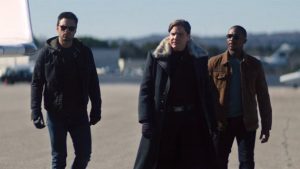 Further, this episode banked on surprise reveals throughout, which fell flat for me. First, we have Bucky and Sam’s teaming up with Zemo to pinpoint the location of the new super soldier serum, which, granted, was actually revealed at the end of episode 2. Daniel Brühl’s reappearance was actually one of my favorite parts of the episode, not because of the shock or “wow” factor, but because I genuinely enjoyed his balance between playfulness and gravitas as he strutted from scene to scene. Zemo led the team to the second Big Reveal, which was one for the diehard comic fans: the city of Madripoor, where laws and the lawless run amok. The city’s origin hails from none other but Marvel’s X-Men comics. What role that may or may not play in future episodes is unclear, but the arrival there felt a bit random and clunky to me, and Sam’s throwaway laugh lines regarding the new locale did nothing but add to its disjointed effect. 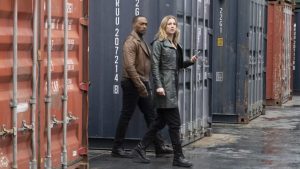 Plot-wise, in Madripoor the group encounters none other than Sharon Carter, who we haven’t heard of or from since Civil War. She equates another big name drop and reveal, and while Carter is a logical character choice to bring out of the woodwork for help when our leads need it most, I needed there to be more focus on what actually happened to her for there to be sufficient motivation for her spot on the team. Her story – a story that could be a spinoff series on its own – is merely glanced over as she provides Bucky, Sam and Zemo with a place to rest in the dangerous-but-not-as-dangerous section of Madripoor, and helps them locate the mastermind behind the super serum’s reemergence.  Her character is still enjoyably played by Emily VanCamp, but not so much to distract from the overall disengagement of the episode. 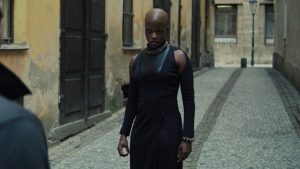 After a hellish escape attempt from the un-blipped good doctor’s secret lab, where the trio learns that Karli Morganthau stole the 20 remaining vials of super soldier serum in existence, they shoot Dr. Nagel and make a narrow escape from the seemingly unlimited bounty hunters that have gotten word of their whereabouts. The episode leaves us with one last HUGE reveal: Bucky, leaving Zemo and Sam to their own devices, comes face to face with Ayo, the Wakandan warrior, with whom he apparently has unfinished Zemo-centric business.

I adore Ayo, which is why I felt cheated by her reappearance in an episode that had so heavily relied on reappearances and shocker moments that it forgot to include a real story. I am looking forward to next week, though, as we will undoubtedly see more of her.

One thought on “Watercooler Reviews | “The Falcon and the Winter Soldier” Round Table: Episode 3, “Power Broker””