Watercooler Reviews | “The Falcon and the Winter Soldier” Round Table: Episode 2, “The Star-Spangled Man” 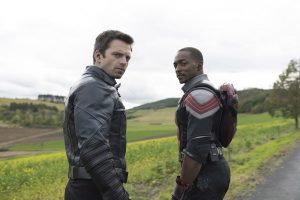 This week The Falcon and the Winter Soldier showed a reluctant Bucky and Sam teaming up in an attempt to stop the Flag Smashers, a group that increasingly looks like it’s made up of more competent versions of WandaVision‘s Tyler Hayward. I mentioned Hayward in last week’s review of the pilot, too, and I bring him up again now because it certainly seems Marvel planted the seed of doubt for us through his character – doubt that are heroes are, for once, in the wrong. That inkling, which was subtle in WandaVision, has grown into something more substantial by episode 2 of The Falcon and the Winter Soldier as we get a little more insight regarding the Flag Smashers, and some context regarding their apparent motivations. 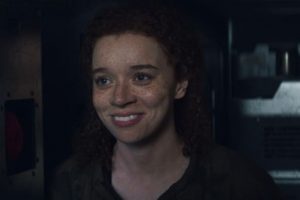 Introduced in the pilot as the discernible Big Bads, the Flag Smashers and their leader, Karli Morganthau, do have a basis in the comics. Originally named Karl Morganthau, the character has been gender-swapped and now leads an organization, instead of occupying the “Flag Smasher” title alone. One mystery The Falcon and the Winter Soldier has yet to solve is what on earth the Flag Smashers are doing running around with Super-Soldier powers, but that is almost a guaranteed matter of patience – I’m far more interested in the group itself and their motivations. Karli is recognized as “Robin Hood” by civilians who opt to provide shelter and protection for the group as they make their moves, and this perspective holding such a clear voice in only the second episode of the series really got my attention, because Marvel now has a choice to make. It is more and more obvious every day that each new generation of Americans favors socialism to capitalism, and is growing ever-more distrustful of the American government. And while needless to say there is a difference between socialism and anarchy – does the show want to stick to its superhero guns and throw its full support behind governmental policies? Or will they show us our protagonists reckoning with what they had previously believed was right, understanding that the people they left behind – not by choice, of course, but that seems to be the general sentiment from those that survived the Blip – sympathize with the Flag Smashers and their desire to secure “one world, one people” going forward? 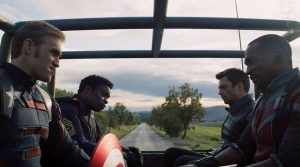 It seems that it will be the latter, given the aforementioned seeds of doubt the MCU appears to be planting for us. Something else to point out is the introduction of John Walker, who is revealed to be the new Captain America we caught a glimpse of at the end of episode 1. Clearly, neither Sam nor Bucky approve, especially Bucky, who adamantly believes Sam never should have given up Steve’s shield in the first place. But the dynamic I’m more interested in here exists between John and Sam, because both believe in and work with governmental policies. John, though, is obviously the favorite child, and he’s certainly wasted no time in making it clear he knows it. I have a feeling, based on… 244 years of history, Marvel’s American government will take a page out of the real-life American government’s book and put all its eggs in the white guy’s basket. But we’ve got at least 3 or 4 episode’s worth of time for that to develop.

I bring this up because it seems John Walker is going to end up being the most honest representation of the relationship between superhero + government that The Falcon and the Winter Soldier will offer, and that is important because if Sam and Bucky are going to clash with the government, there might be room for a much deeper exploration of perspectives as they each go after the Flag Smashers in their own ways. At least, the potential for it is there, and it would be a brilliant way to water the seeds of doubt and conflict between Those Who Were Blipped and Those Who Stayed. If that opportunity were to be missed, I would be severely disappointed.

But again, it’s Marvel, so I’m guessing they’re a few steps ahead of me.