Hot on the heels of the WandaVision finale, which most of us are still processing, on Friday Marvel dropped the first episode of their next highly anticipated superhero series, The Falcon and the Winter Soldier. This time around, the show feels more like the Marvel we know and love – the plot immediately follows the events of Avengers: Endgame and sufficiently adds insult to injury with not-so-subtle name-drops of Cap and Tony Stark. (Side note: given the hype already ramping up for Loki it seems we can expect a similar transition when it comes time to face the conclusion of this latest Marvel venture. But I’m getting ahead of myself).

The Falcon and the Winter Soldier had a huge hurdle to leap over right out of the gate: to present us with a plot so engaging we would not be so stuck on our lamenting of the aforementioned original Avengers that we would forget how much of Marvel we have yet to look forward to. I admit I was skeptical of the show’s ability to do this; WandaVision had the element of confusion on its side as we all tried to figure out what the hell was happening for the first three episodes, but here, we knew exactly where Sam and Bucky would be picking up weeks before the first episode aired, and I assumed that would contribute to the pilot’s detriments. Admittedly, I was also rather mistrustful of the show because I have never been drawn to Bucky in the same way that it seems most others are – perhaps it is Sebastian Stan’s performance I take issue with as I have not yet seen him in any other role, but in any event I have found Bucky and his story bland and imaginatively lacking from the very start. However, I’m pleased to say I was wrong on both counts. Instead of a disjointed attempt to play catch-up for two characters who have largely served as Captain America’s background noise thus far, to my pleasant surprise, I found a well-written and enjoyable pilot, one that had clearly been thought through completely, presented the appropriate number of predictable and not-so-predictable plot twists, and had me genuinely invested in each character’s next move. 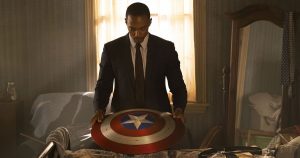 As the episode progresses, we quickly learn that though Cap’s intention to pass the baton (er, shield) to Sam was widely understood, he has chosen not to take up the open position offered to him of Captain America. From the perspective of comic book fan to comic book character, it’s easy to berate him for this choice, but the decision endeared him to me as we have all turned down great opportunities when things simply didn’t line up. Intentional or not, I felt more connected to Sam as we were introduced to his sister Sarah (played by the brilliant Adepero Oduye) with whom he shares a deeply loving but strained relationship due to their different views about what to do with their shared remaining property, post-blip. Sam is firmly against selling their family’s house and boat, while Sarah is adamant that while he was gone for five years she learned what she needed to do to survive, on her own. Like in WandaVision, we witness the central conflict between those who were snapped away by Thanos and those who were left behind – it’s more hostile, of course, between Hayward and Monica Rambeau, but Marvel clearly isn’t going to shy away from this very human question as we make our way through the next set of phases – how do we move forward from this total and absolute life-changing event?

How timely. Maybe we should acquiesce and put the MCU in charge of vaccine rollout and be done with it. 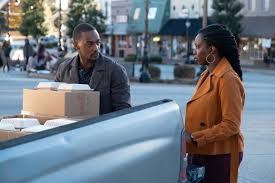 The relationship between Sam and Sarah is so enjoyable and so genuinely played by both actors, there were moments I nearly forgot I was still watching a Marvel show, and that was a welcome surprise. It’s no secret that superhero media is very formulaic; there is always a degree of separation the audience willingly embraces in order to find the somewhat ridiculous events of the universe believable. To double back and throw in an element of true humanity, and I mean the humanity we are all capable of without any giant metal wings or superpowers – that is a lovely breath of fresh air. 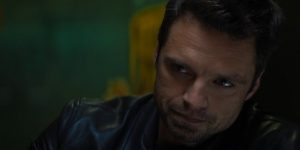 And then, having practically forgotten there was a second major character to be on the lookout for, there he is – it’s Bucky, who has been skating on the thinnest of thin ice with his therapist and come up with a very different method of making amends. Still, he makes it clear that he is No Longer The Winter Soldier to all but the grieving old man he has befriended, too ashamed to admit to his murder of the man’s son while he was controlled by HYDRA. It’s very refreshing to see Bucky making his was in the modern world as Cap once did, though Bucky seems to be handling it all with slightly better social skills (for all Cap’s attributes, there was always an element of awkwardness that followed him around like an aftertaste). In the same way, Bucky’s past follows him, and I am quite curious to see how these two storylines unfold as Bucky and Sam inevitably team up in the coming weeks. If that is what happens, of course. I am not so naive as to believe I could outsmart the MCU. 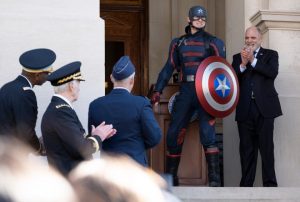 The episode left us, indeed, with a new Captain America, but the person behind the mask was not either of those most audience members expected. A true cliffhanger, we are left to stare with Sam in jaw-dropping awe and secondhand shame as some IMPOSTER stands with Cap’s shield and suit, smiling like an actor on one of the floats at the Macy’s Thanksgiving Day Parade. It’s fair to say this is in essence how Steve Rogers’ career as Captain America began, so perhaps I am being too hard on this individual, whoever they may be. Still, I almost wished Doctor Strange would step out of thin air with the time stone to spare Sam the regret of his ill-fated decision. Unfortunately, we all know why there’s no use wishing for that scenario, so…. Roll credits.

All in all, this was a very solid start to a series that will likely have us chomping at the end of each week. Strong performances abound across the board and as the episode unfolded I could practically hear fan theories evolve in real time. Marvel, yet again, did not disappoint.