The Conversational Intimacy of “Before Sunrise” 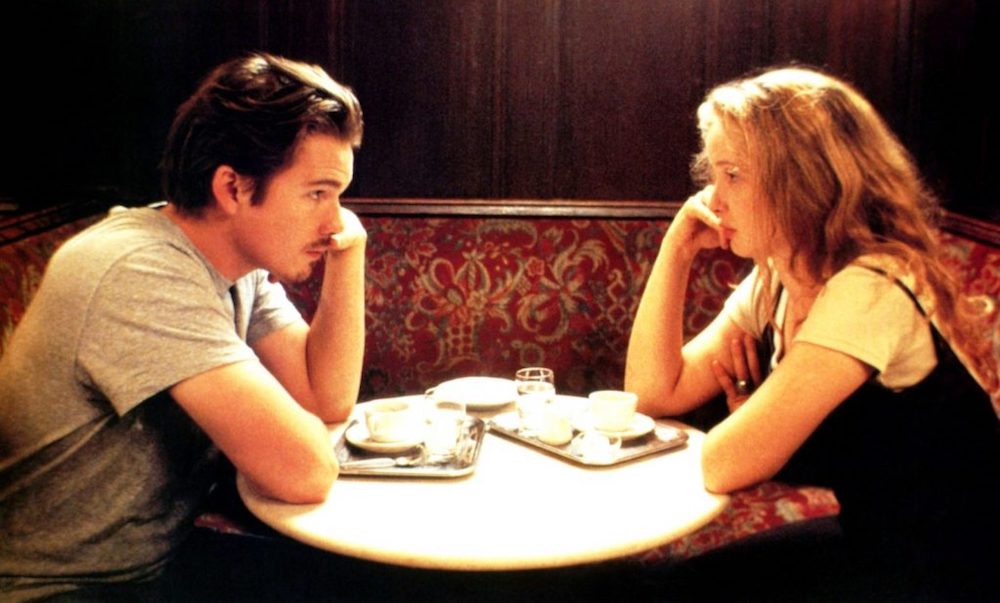 Whether it be platonic or romantic love, there are those moments in every worthwhile relationship where things crystalize in the moments when the two parties merely exist together. I don’t know if there’s a film that captures this better than Before Sunrise. Richard Linklater’s 1995 flick and first of the Before trilogy is one of my favorite romance movies of all time. The viewer feels like they’re seeing the process of falling in love. It simultaneously makes you envious of what they have but it also provides the reassurance that maybe this person is just waiting on the next train you get on.

Before Sunrise is a dialogue-heavy movie and doesn’t rely on plot to propel the characters forward. Two strangers start talking on a train in Europe and they hit it off. Jesse (Ethan Hawke), an American, is getting off at the next stop in Vienna where he will return home the following day. Celine (Julie Delpy), a French woman is on her way back home. He asks her to continue their good conversation with him since her only commitment the next day is lunch with a friend. She gets off and they spend the rest of the day and the entire night talking.

The only reason our two leads even start interacting is because of a German couple on the train that is having some sort of argument. Neither Jesse nor Celine can understand them. The two first make eye contact as the bickering couple rushes past. Even as the audience we aren’t given translated subtitles for the argument. We’re all left in the dark, but it provides just the perfect instance for a conversation to take hold.

It’s sometimes easier to talk about things weighing on your mind with a stranger, since they don’t have the whole context of you, and are rarely in a position to judge. With Jesse and Celine, their relationship is in this weird pressurized canister. Time is more precious and dwindling so there’s no use in wasting it on filler. They launch into conversations on love and gender and identity because neither of them has anything to lose. They don’t owe the other anything. They don’t even find out each other’s names until they’re off the train. There are no rules for them, as they talk about later in the movie, this night wasn’t supposed to happen.

There is a great moment right after they get to the station and they’re in Vienna, no longer singularly propelled by a train. They can now decide where they go, and they both stand there awkwardly, laughing uncomfortably. They both realize what they’re actually doing and how crazy it is, so Jesse proposes a designated Q&A session and they go back and forth.

Their characters differ on many fronts and their personalities clash, but these aren’t elements that bring them down, it arguably makes the tension more powerful. They are willing to argue, neither backing down. The scene with the fortune teller gives the audience a lot in regard to each of their ways of life. Celine is open to experiences, looking forward, allowing the fortune teller to come over and read her palms. Whilst Jesse is stuck with his preconceived notions and what he’s been told his whole life, believing that it’s all lies and preposterous.

These mindsets are also rooted within their genders and also the fact that Jesse is American, and Celine is French. They’ve lived two completely different lives with varied cultural differences, and here they clash in a place where neither of them has a home advantage. Vulnerability is different for men and women (and of course this also applies to trans and non-binary people, however, this movie does focus on a heterosexual relationship with two cisgender individuals, so I will be talking about gender broadly within the male/female binary). Celine and Jesse both took risks by opening themselves up to a stranger, although arguably Celine put herself in a much more potentially physically dangerous position. Their genders affect how they communicate in what they deem it appropriate to disclose and how to be emotional, all of these things are tied together and are moving parts throughout their evening.

I also love that the film takes place in Vienna, instead of more traditionally “romantic” cities in Europe. It sets it apart and proves that these things can happen anywhere. But, also the hustle and bustle of the city help propel their night on. There are bars that are always open or places to get food, or people performing music. The city itself wants them to keep going on, so it keeps providing them more and more outlets.

One scene that is particularly powerful is one that has no dialogue. Our two strangers are in a record store, which is one of their first stops in Vienna. They both flip through the overwhelming collection when Jesse suggests they check out the listening booth in the back. Celine puts on the record she was holding (which just so happens to be such a romantic song, don’t you just hate when that happens). It’s a tight shot of the two, chest up, the viewer slightly looking up at them, almost as if we’re packed in the small booth with them. There are no cuts, and the scene just plays out. Each of them sneaks glances, each taking turns to look at the other person. Sometimes they briefly make eye-contact, but both look away immediately. Jesse and Celine stare at every possible corner in the small room, scanning every surface. The energy is tangible, sticky with static. They each sneak little smirks as they try to focus on the song, but obviously, neither of them is paying attention to a single note. It’s almost an unbearable scene because you just want to yell at them to kiss or hold hands, but it’s perfect because they don’t. Because real people wouldn’t– they’re still strangers. There would be tension and small glances, both people too nervous to make the first move, so you force yourself to suffer through the moment. It’s also the longest amount of time where neither of them says anything; they’re both speechless.

They later wander into a church quite late, pleasantly surprised that it is still open and available to them, even though the sun left them quite a while ago. Even though religion is one of those topics you’re not supposed to talk about with strangers or on first dates, I feel like it always has a way of sneaking its way in. And especially with them being in Europe, churches are such staples of the landscape, imbedded in the history around them. They whisper close and respectfully, having their own confessional with each other.

Their first argument is interrupted by the poet sitting by the water who asks them for a word for a spontaneous poem. The impromptu and freestyle nature of this writer succinctly fits into their night. They’re making it up as they go. They don’t know what their last stanza of their relationship is going to be. They don’t know if they have any future together. And also, once they hear their poem, that includes their chosen word ‘milkshake’, Jesse pessimistically doesn’t believe it was so extemporaneous, but Celine loves it and believes in its creation for them. Pessimism and hopeless romanticism don’t seem to make sense together, but I guess Jesse allows himself to believe in surprises and whimsy when he has a direct role in it.

It’s funny that they’re able to talk about religion and gender and death, yet don’t talk about their dating lives until well into their night as they are at the club where they both poorly play pinball. In this scene, they’re both kind of awkward and a little closed off. This quick window into their real lives, their problems, and baggage being revealed shakes off some of the magic accumulated thus far.

Even though these two are great at conversing, it doesn’t mean they’re good at communication. They aren’t being realistic about how they’re feeling because neither of them wants to step back into the real world, they want to stay in this fun fantasy haze. In order for them to truly be honest with each other, they can’t “talk” to each other. They each pretend to call one of their friends from back home to update them, and the other person pretends to be the friend. Celine “calls” her friend she was supposed to have lunch with and Jesse “calls” one of his best friends. They each tell their “friend” about how they met and their night and how they feel about this new person and what they want. They appear like high schoolers coyly playing down their emotions instead of adults who have revealed so many parts of themselves. Crushes and feelings have the ability to knock you back on your feet to a more naive version of yourself.

Ghosts are brought up many times in the film. Jesse and Celine talk about their encounters with them but also with what happens after we as humans die. It feels so fitting as they aimlessly wander this city, one they don’t know and where no one knows them. And in the morning, only their wine glasses in the park will be the remaining marker that they were there at all. Their cobblestone footsteps simply haunted the city for a night.

They only ever stopped moving when they got to the park and laid down in the grass. It was the only place where they ever “set up shop” or remained for a prolonged period of time. They mention this concept of real-time vs. fantasy time. Neither of them ever yawns or looks tired, they never even look at a clock. And, in the middle of a good date, time passes like nothing, it slips away, feeling like a new plasmatic entity.

Jesse talks early on about his idea for a cable access program, one in which people would film a day in their life for 24 hours so you would get to see all of the little ins and outs of people from all over the world (The Truman Show was still a few years out). Celine thinks the idea is kind of stupid and would be boring. Even though this movie isn’t the exact length of the date, we still get to see a lot of the ebbs and flows of it. We watch it unfold in front of our eyes, like a time-lapse video of a flower sprouting from a seed.

This movie’s connection with reality is a direct, live current. Even now in 2020, it still feels true. The wandering nature of a great date, where all you can do is cheekily glance over at one another. No need for a cell phone or a destination, all you need are questions to fuel time. Dates can be horrible and scary, typically cringey but also can be pure magic. Whenever I’m feeling doubtful and/or pessimistic, this movie is always here to remind me how simple connection is and how magnetic it can be.