Watercooler Reviews | The Consequences of Desires in ”The Djinn” 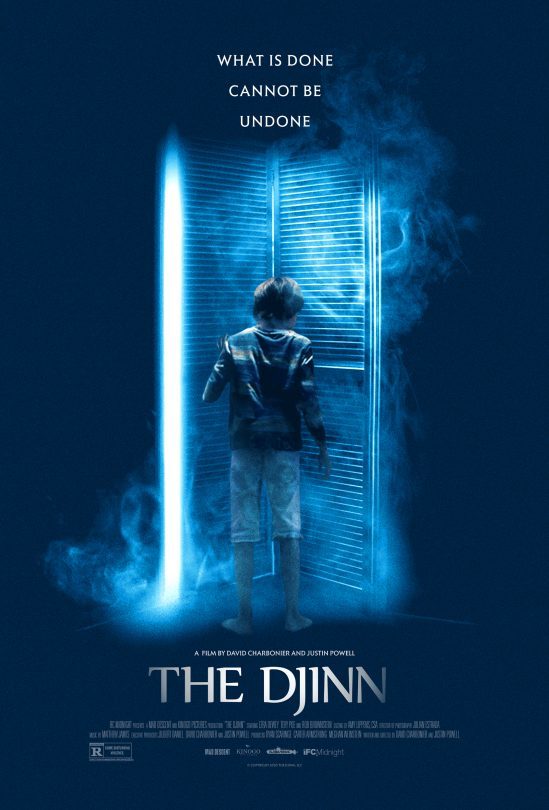 The Djinn (2021) carefully crafts a ‘be careful what you wish for’ story that holds strategic suspense throughout its concise runtime of 82 minutes. This self-contained tale starts with an ominous scene of a young, mute boy named Dylan Jacobs (Ezra Dewey) witnessing his mother’s suicide, Michelle Jacobs (Tevy Poe), one summer night in the 1980’s. Fast forward a year later to Dylan and his father, Michael Jacobs (Rob Brownstein), moving into a new apartment in Burbank, California. As they are unpacking, Dylan discovers some possessions of the previous apartment owner who died in the unit. Among these possessions is a book of shadows which contains a ritual for the wish of desire, a guilt ridden Dylan performs the ritual after his father goes to work that night.

The lore of the Djinn within this film is simple but tricky especially for a child. The audience is only given what Dylan reads at a time effectively keeping us in the dark as well. The moral of ‘be careful what you wish for’ is a tale that most of us know. However, it can still be told in a meaningful manner which this film does successfully. The majority of the film is suspense between the Djinn and Dylan which could have easily become stale but directors and writers, David Charbonier and Justin Powell, understand the simple rules of suspense to keep an audience engaged. The setting is tight as the main set is a two bedroom apartment. A few times we are placed in the Djinn’s perspective which was refreshing. Charbonier and Powell play well on the fear of the unknown by slowly revealing aspects about the Djinn to Dylan and the audience. They also understand keeping each glimpse of the Djinn we see fresh while holding off the complete creature reveal until the film’s final moments. The gore is quite minimal but there is some within the film. The light and sound design was cohesive and effective in building tension as well as useful in transitions. The special effects never felt out of place and some of the makeup was simple yet terrifying.

Ezra Dewey carries the film effortlessly through his body and facial acting as Dylan is mute throughout the entire duel with the Djinn. Rob Brownstein instills a loving father trying to help his son through grief and loss despite having little screen time. The body acting of the Djinn by John Erickson, Donald Pitts, and Tevy Poe was fluid and horrifying between the actors. They carried great suspense in their Djinn movements which kept the viewer on edge.

The largest criticism could be the story is easy to put together as it has been done plenty of times before. However, it is the strategic journey we go on with Dylan that makes this criticism dull.  It is an accomplishment to have such a small cast and compact setting that keeps you engaged at every moment. The Djinn relies on suspense rather than jump scares which will always be a welcomed contrast in the horror genre.