The Comfort of Documentary Film during Quarantine

It’s hard to say whether a sequence of elderly dancers joyfully participating in a regular class would have brought the same emotion if life as we know it hadn’t been brought to a pause, but as I witnessed that very scene, I can’t deny a tear or two was brought to my eyes.

I’ve found more comfort in documentary films than any narrative film or television series over the past couple months. There is something about the simple display of human interaction that resonates when you know it’s real, that this is a thing that used to happen and will continue eventually. And in the case of two of these films, the length certainly helped.

First, I took advantage of seemingly endless time available to view Frederick Wiseman’s masterful Ex Libris: The New York Public Library from 2017. The film runs a generous three and a half hours, although I could’ve watched another ten of it. Wiseman is endlessly fascinated with the power and community to be found in the library system of one of the largest cities on the planet, and the American city that has been hit hardest by the pandemic. 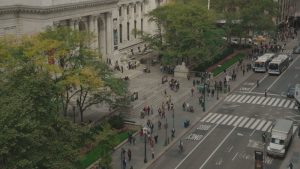 We witness classes being taught, research being done, and communities gathering to better themselves and the opportunities available. The simple act of browsing through books takes us back to a time where we didn’t even notice how special that experience would seem. The city life occurring outside the libraries are that much more enthralling, where are these people going, where did they come from? I’m sure they didn’t think twice before leaving the house, before calling a friend to grab food, it’s a luxury that feels too far away.

Looking back is a common theme of Kirsten Johnson’s Cameraperson (2016). We are taken back through her illustrious career as a cinematographer, seeing the odds and ends of scenes that never made it into the final cut of the films she shot. Instead, we bear witness to images and scenes that, as she describes it, are the images that defined her. There are common threads, the resilience and strength of women who emerge from tragedy, along with the responsibilities inherently given to the modern women, how they manage to do that and so much more.

The film also plays as an ode to traveling. One idea that is consistently revisited is the connectedness of human life, whether in Brooklyn at a male-rage filled boxing match, or the gentle interior life of a family in Bosnia and Herzegovina, shaped by war and tragedy, although quite peaceful and happy when we visit with Johnson. We are all people, trying to make it through the day, with varying degrees of success. In capturing these little moments from all around the world, she shows that we are never that far apart within the scale of human emotion, that while no one feeling is invalid, it’s not that difficult to imagine life in a different country, surrounded by different people and cultures. In a time where we couldn’t feel more distant, it’s reassuring, to say the least.

And in reflecting in my own position, I resisted a favorite documentary of mine, as well as the pride of many Chicagoans in the documentary field, Steve James’ revolutionary Hoop Dreams (1994). In what feels like an again all too short three hours, we are taken through the parallel lives of two dreamers, as they are constantly playing, and being played. As a recent graduate, I felt myself reflecting a lot on the last four years, wishing I had been carrying a camera the entire time. What I would give to visit the great times, and even the worst, because in those worst times I didn’t have to go far to be surrounded by friends or family, or feel the pure adrenaline from watching a film in theaters with an audience. The closeness associated that never felt fragile until just recently. 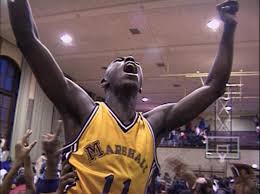 With Hoop Dreams, we are sucked in despite knowing exactly how it ends. Is that something? By having no idea where we’ll be in a week, let alone another four years, it’s a treat to focus on the details of a moment. A common thought has been that we will never take the little moments for granted, like the claustrophobic Red Line on the way home from work during the summer, while a Cubs game has stuffed the car full of fans from near and far. Sure, you may need to sacrifice a spot on a train or two, and navigate through confused tourists, but it’s all apart of life.

I hope for an explosion of documentary as we begin the process of returning to normal life. I want to see people from all over, doing what they have been dreaming and studying to do for years, never again taking a day for granted. The vision of different people, shaped by their cultures and homes and families, and how they view the world around us, as it clicks on, just as usual, for another day. I hope for a day where we’re back on that train, with the sweat that you just can’t reach trickling down your back. But you’re surrounded by people who aren’t that different form you or me, and that’s worth celebrating.