The Absurdity of Serenity

It’s a new year everyone! It’s officially January! And what comes with January (besides the cold)? Movies that studios don’t know what to do with! There have been, in the last decade or so, more than a few movies that have actually shined through the cinematic dumping ground that is January. But for every Cloverfield (2008), The Last Stand (2013, and Split (2017), there are movies that studios just dump out because where else are they going to put them? Today’s article is about one of those films. Imagine for a second that it’s January 2019. You’re in a AMC theater and you hear this line:

This line of dialogue is from the film Serenity. Our protagonist, Baker Dill (Matthew McConaughey), says it to his first mate, Duke (Djimon Hounsou). It’s a pretty funny line but I don’t think that’s what was intended. Right there, you might think I’m about to tear into this movie. But you know what? I have to admit something…this film is one of my guilty pleasures. I can’t call this a good movie. I can’t even say it makes much sense. And yet, god help me, I have a fondness for the film. Some people say there are no more original ideas in Hollywood. Have those people seen Serenity (I ask half-jokingly)? 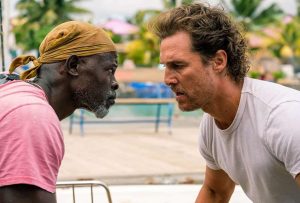 Believe it or not, I’ve seen this film twice now. Yes, I actually saw this in the theater (thank you AMC A-List). If you’ve never heard of it, you’re not alone. Let me give you a little history: this film was supposed to come out in fall of 2018. The trailer even says, “this fall” (I guess they never updated that). So you have a film with a prime October release date and then it just disappears. And not only that, it reappears in January. That is not a good sign. I was interested in the film but didn’t have it high on my list so I kind of forgot about it. Then the reviews came in…

The reviews for this movie were rough. Everyone kept saying that there is this insane twist halfway through that sinks the whole movie. I thought to myself, “Hmmmm color me curious. I want to know what this insane twist is.” It was a frigidly cold January morning when my best friend and I went to see it. I sat down in my seat, unaware of exactly what I would see. And then the film started. Right off the bat, we’re in interesting territory. The aforementioned line about Duke’s wife is funny even though McConaughey tries to sell it. That’s the thing about this movie. These are more than qualified actors working with a writer/director (Steven Knight) who has done several successful projects in the past. They are all trying their damndest to sell this.

Before I get ahead of myself, let me describe to you the plot. Baker Dill and Duke are residents on Plymouth Island. For a living, they take tourists out on Dill’s boat (named Serenity) to go fishing. It’s a seaside town where everybody knows everyone and everything. It’s also in the middle of nowhere. So it comes as quite a surprise when Dill’s ex-wife Karen (Anne Hathaway) comes looking for him. She has a proposition: Her new husband, Frank (Jason Clarke), has been drunk and violent towards her for far too long. She wants Dill to take him out on his boat, drop him in the ocean for the sharks, and she’ll pay him ten million dollars. Intriguing set-up, no? What’s Mr. Dill going to do? Along the way, we discover a few other things: Diane Lane plays Constance, an island resident who pays Dill for sexual liaisons when he is low on cash. There’s also an impeccably dressed salesman (Jeremy Strong) running all over the island with something very important to tell Dil 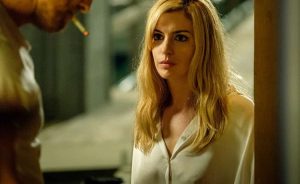 It’s all a set-up for a big reveal that comes exactly sixty-three minutes into the film. Now here’s the thing: A good twist will make you gasp and rethink everything that came before. For example, The Sixth Sense, probably the greatest twist of all time, works because M. Night Shyamalan has made sure all the pieces fit into the ending puzzle. Steven Knight does not do that. Watching this a second time did no favors to this twist. In fact, it raises more questions than answers (the most important being, “wait then what was the point of that scene/character?”) It’s a film that takes itself so seriously and plays it so straight-faced yet has such an absurd third act. I don’t blame the studio for changing the release date because, well, how would you sell this thing? Look, I have fun with the movie. I like the movie in my own way. But I can’t take it seriously. Could this ideahave worked? Maybe if the film had more time to develop it and less time to treat it as a “gotcha” twist.

But it’s not all just the twist. No sir. Adding to the bizarre choices in this film is Jason Clarke as bad husband Frank. I really like Jason Clarke as an actor and I’m not saying there aren’t guys out there like this…but man, come on. What a cartoon. They don’t just want you to hate this guy. They want you to think he is the antichrist. I was simply in awe of this character. When thinking about how to describe this villain, the words “well-rounded” and “subtle” shouldn’t ever come up 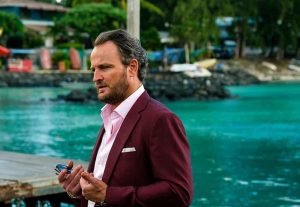 But you know what? Through all that, I am not disappointed I saw this.On this second viewing, I totally went with how ridiculous this filmgets. I don’t think I can un-ironically recommend this film. Take out the twist and it’s just a ho-hum film noir. But, with this twist, it becomes something else. Not “good” in the traditional sense but something almost admirable. Like I said, some people say there’s no originality in Hollywood anymore. Well Steven Knight has certainly come up with something original. The twist here is interesting but so illogical with what they’ve set up, I almost respect the film for going that far. This is one of those good bad movies that I smile about whenever someone brings it up. Vanity Fair critic Hilary Busis summed it up perfectly:

“I want to live in a world where we get a movie as bonkers as Serenity every month, or at least every year—though I also know that films like this are special because they’re rare, the result of a precise, ludicrous alchemy that can only be achieved by accident.”

I am genuinely curious as to what Steven Knight will do next. Good or bad, his next project is definitely on my radar. 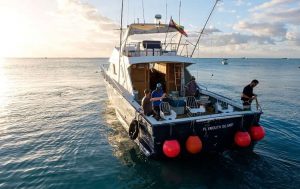