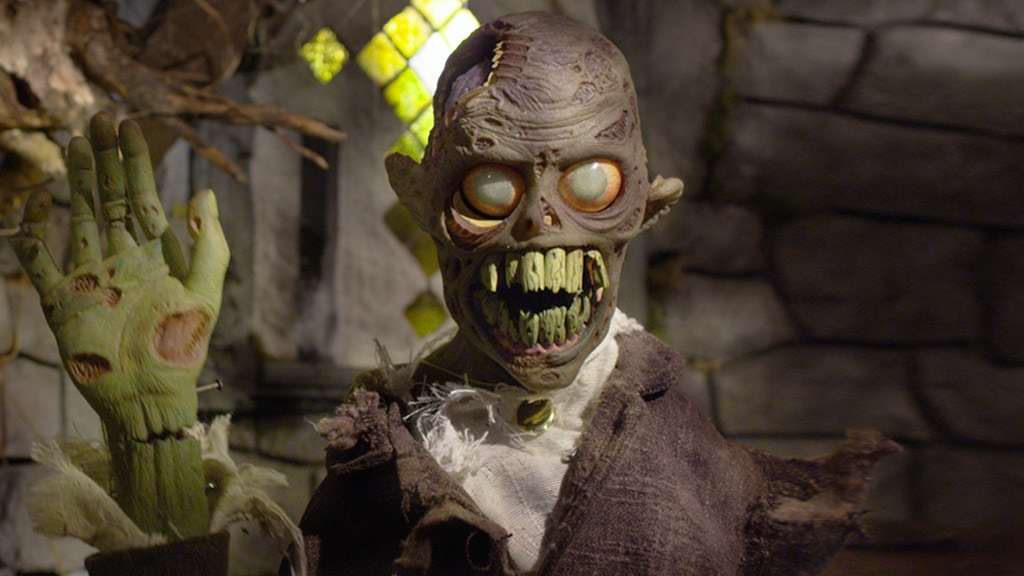 I wish I had been more on top of the virtual festivals that happened this year, but I did watch twelve movies over five days as part of Nightstream, a virtual genre film festival in October. Some of those twelve are movies that will (hopefully) see wide distribution in the US in 2021. So below are the best movies I saw in 2020 to keep an eye out for in 2021. While they are all genre movies of some sort, each is unique and there is a great variety both in form and content, from a movie with puppet gore to a (mostly) grounded family drama.

I reviewed Jumbo for Cultured Vultures and I don’t know that I can come up with a better blurb than when I wrote “Jumbo likely could have coasted into cult favorite status over a few years simply as ‘the movie about the woman who falls in love with a tilt-a-whirl,’ but Zoe Wittock’s feature debut turns this story into one of the most genuinely affecting romances of the year.” The fact that it’s also the first film I saw all quarantine that made me deeply wish that I had been able to see it on a big screen because of how beautiful it all looks is just a bonus. I was not able to find any information on US distribution as of now.

Frank & Zed is a medieval-fantasy-monster-horror-comedy made entirely with puppets and miniatures, and the second half plays like one of Claycat/Lee Hardcastle‘s delightfully gory stop motion shorts but with puppets. The craft on display here is incredible and it’s hard not to just fall in love with it because of what an obvious labor of love the movie is, but it also managed to make me feel something for the two titular monsters which is more than I can say of most live action horror movies about humans. I reached out to Puppetcore (the company behind the movie) via Twitter about distribution and they told me that they’re still looking for a distributor at the moment.

AV: The Hunt (not to be confused with Blumhouse’s The Hunt which received a wide release this year after some hubbub) is a Turkish film that follows the young Ayse as her husband and other members of her family hunt her down to restore the family’s honor after she’s found sleeping with another man in the film’s opening. It’s an incredibly lean movie that may leave some viewers’ stomachs in knots from the tension. It feels like a combination of other recent films about gendered violence, Coralie Fargeat’s Revenge and Jennifer Kent’s The Nightingale came to mind while watching, and a very specifically Turkish story about honor killing. I was not able to find any information on US distribution as of now.

Pelican Blood follows Wiebke, a woman who trains horses for police, as she struggles to help her second adopted child to adapt to life in her new home. The film spends most of its runtime as a fantastically acted and written family drama that makes you deeply feel for its characters before seamlessly becoming a beautifully spooky horror movie. Nina Hoss is fantastic as Wiebke but what really blew me away here were the performances from Adelia-Constance Ocleppo and Katerina Lipovska as her children. I was not able to find any information on US distribution as of now.

The Queen of Black Magic (directed by Kimo Stamboel)

I also reviewed The Queen of Black Magic for Cultured Vultures and again am quite happy with my description of this as “a brutal ride well worth taking for any horror fan that likes to test their nerves, and their stomach.” The movie sets up it’s simple plot (a group of families return to the orphanage where some of them grew up and bad things start happening) quickly and then becomes a relentless barrage of a variety of horror styles. I cannot in good conscience recommend this to the squeamish or those with entomophobia (there are a lot of bugs), but if you love an edge of your seat horror thrill ride, this is the best one I saw in 2020. The Queen of Black Magic will be available on Shudder beginning January 28th.